The Madinah Community Center was founded in 1995. It serves as a mosque, officially titled Masjid Us-Sunnah, school, and social gathering place for the Muslim community. It is one of four, thus far (the community is slowing growing), Muslim organizations in the city. The number of members of the Center has increased over the years, prompting the effort to build a new Islamic center which began in 2012. Construction will begin in 2017 at 6510 Watts Rd., which is located not far to the west along highway 14. The new building will include a gym, school, and an area for women and children.

A rendering of the new center. Image: Madinah Community Center 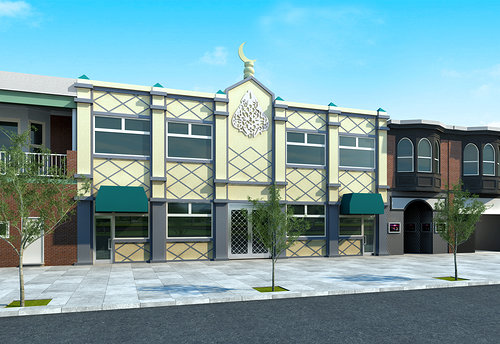 The Muslim community of Madison often organizes talks and discussions to educate the public about Islam and the issue of Islamic extremism. One of these sessions, sponsored by the Madinah Community Center, was held in January 2016. Over 500 people attended, with some having to sit in an overflow room. Among the attendees were government officials and members of the law enforcement community.