Listen to a narration of this entry's description by David J. Trowbridge.

Constructed in 1921, the Corn Palace celebrates the agricultural heritage of South Dakota and replaced two previous structures that were also built for this purpose. In addition to serving as one of the state's most famous tourist destinations, the building holds an arena that hosts concerts and sporting events. The exterior and interior of the structure is decorated with murals made up of corn and other grains, and the community celebrates the dedication of a new mural each year. As many as 500,000 tourists visit the Corn Palace each year while families throughout the region come to the Palace for concerts, sporting events, touring shows, and community events. The community celebrates the Corn Palace as part of a larger festival that celebrates their agricultural heritage at the conclusion of the traditional harvest in late August. 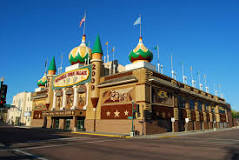 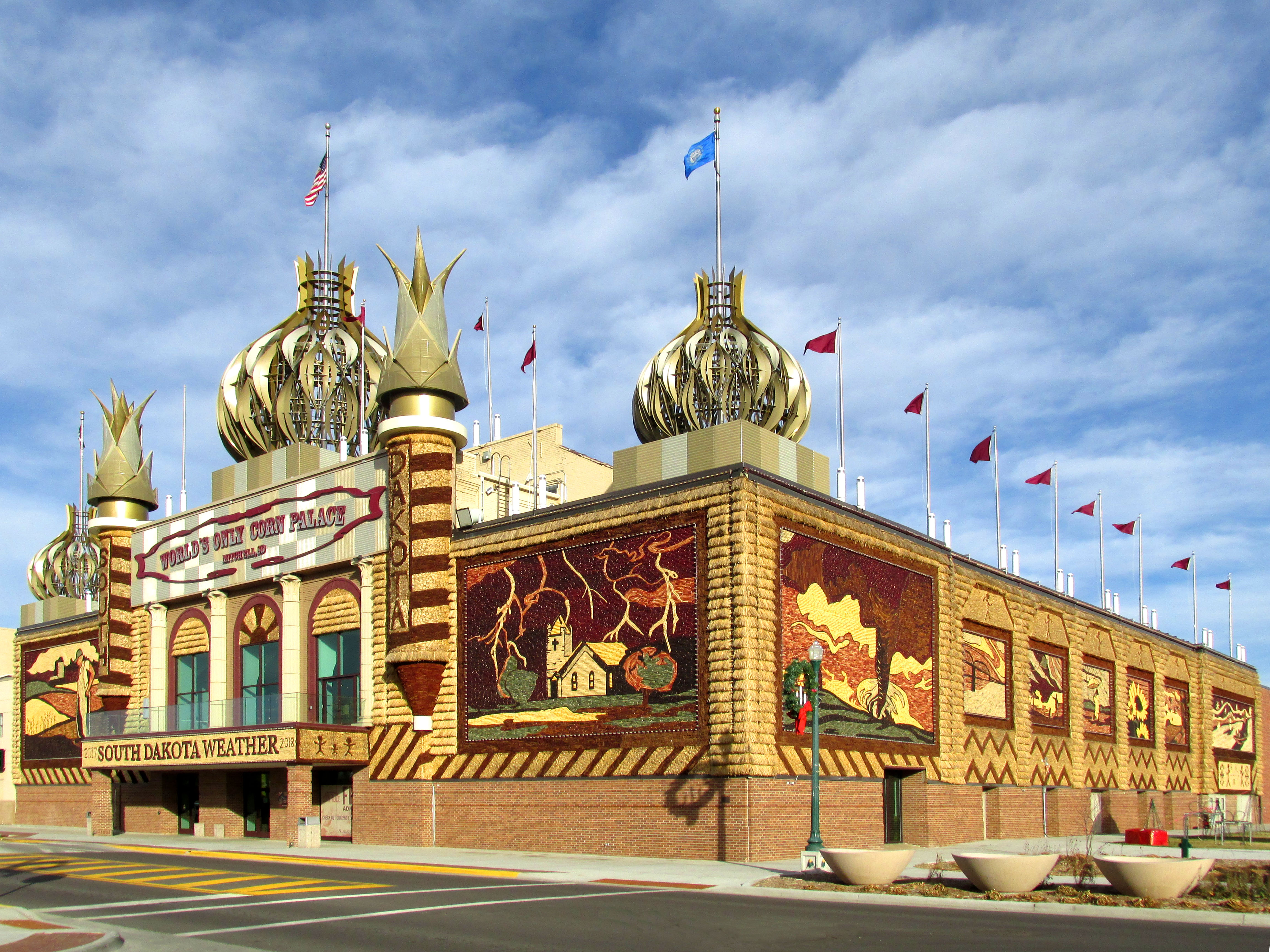 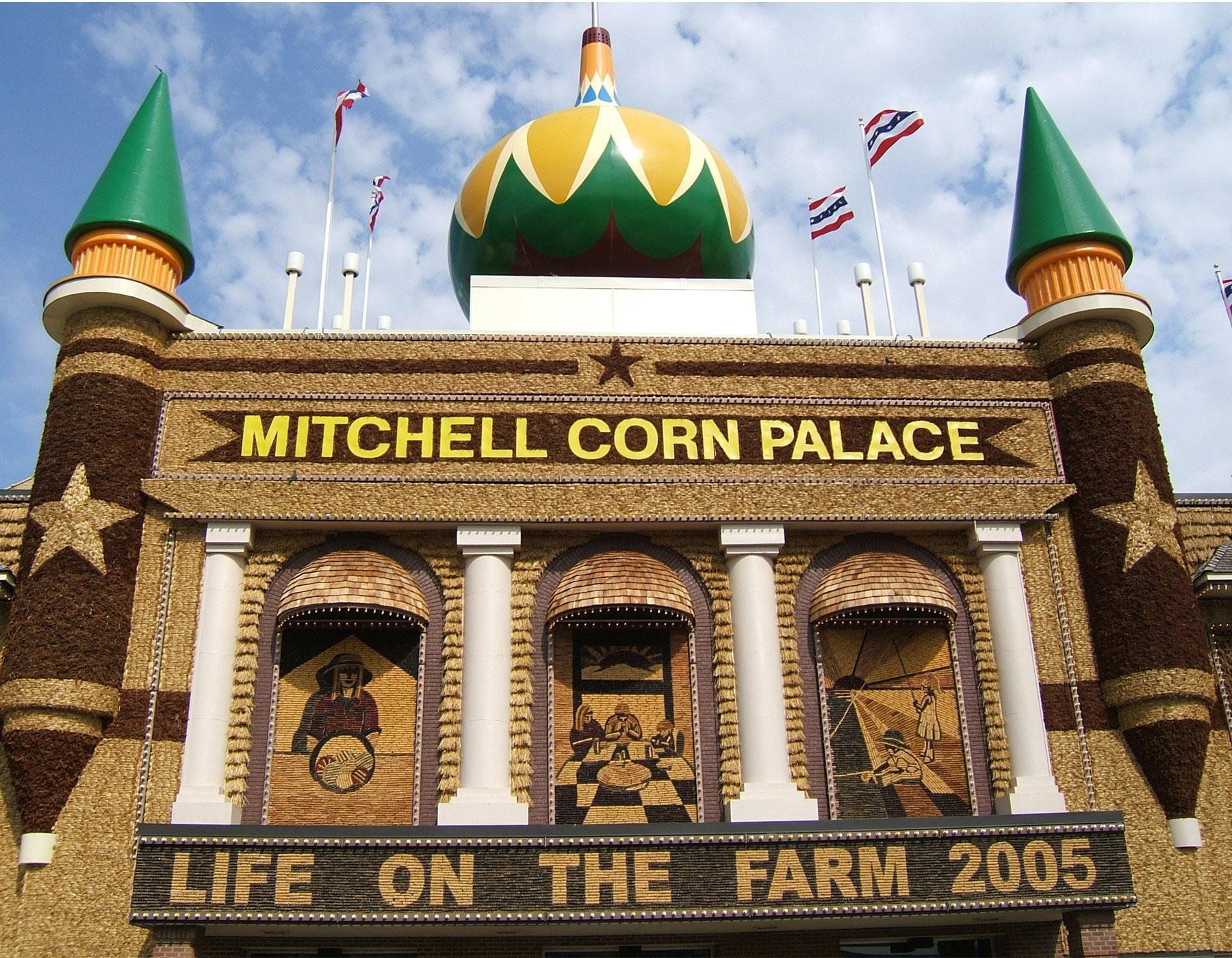 Listen to a narration of this entry's description by David J. Trowbridge.

This structure was the third Corn Palace built as a permanent structure in a series of corn palaces that were built in the late 19th and early 20th century. This structure was built in 1921 and replaced the second Corn Palace built in 1905 which eplaced the original Corn Belt Expansion, a corn-based structure that was built in 1892. The building utilizes a Moorish architectural design. Starting in the late 19th century, a number of cities in the Great Plains started constructing "corn" or "grain palaces" to promote the cities and their products. From 1887 to 1930, around 34 corn palaces were built across the Midwest United States; the only one that remains is the Mitchell Corn Palace.

The original Mitchell Corn Palace, was dedicated as the Corn Belt Expansion in 1892 to showcase how rich the soil was in South Dakota to encourage people to settle there. The building was a large wooden castle right on Main Street on land donated by First Corn Palace Committee member Louis Beckwith. In 1904-1905, the city of Mitchell posed a challenge to the city of Pierre as part of a larger campaign to become the state capitol of South Dakota. As part of this effort to highlight their city, Mitchell residents replaced the 1892 strucutre with the Corn Palace. Although Pierre retained their status as the capital of South Dakota, the Corn Palace became a symbol of Mitchell which led to a campaign to build an even more impressive structure in 1921. In 1937, the current disttinctive Russian domes and Moorish minarets were added.

In 2004, the Corn Palace recieved national media attention after it received funding from Homeland Security. The attention drew criticism from the Department of Homeland Security and the grant program, but the Corn Palace also received DHS funding a few years later to add a camera-based security system ahead of President Obama's visit in 2008. Federal funding has also helped to maintain some of the cultural and historic aspects of the structure, including funds to protect the fiberglass statue of the Corn Palace mascot "Cornelius" in 2009.

The Corn Palace is part of a larger cultural heritage and tourism area of the city and is adjacent Mitchell Prehistoric Indian Village preserves the site of a Native American village that predates the arrival of Europeans in the Americas by five centuries. The village site includes artifacts and an earth lodge used for reproduction purposes..