Located in New Orleans’ City Park, Carousel Gardens Amusement Park is home to one of the country’s oldest wooden carousels. Originally built in 1906, it is one of only 100 or so hand-carved carousels in the nation, and the last one in Louisiana. It suffered extensive water damage as a result of Hurricane Katrina and was closed for two years while it was renovated, with the Friends of City Park raising the necessary funds. Its 56 animals were once again being ridden by late 2007. It was added to the National Register of Historic Places in 1988.

The carousel decorated for City Park's Celebration in the Oaks holiday light show. 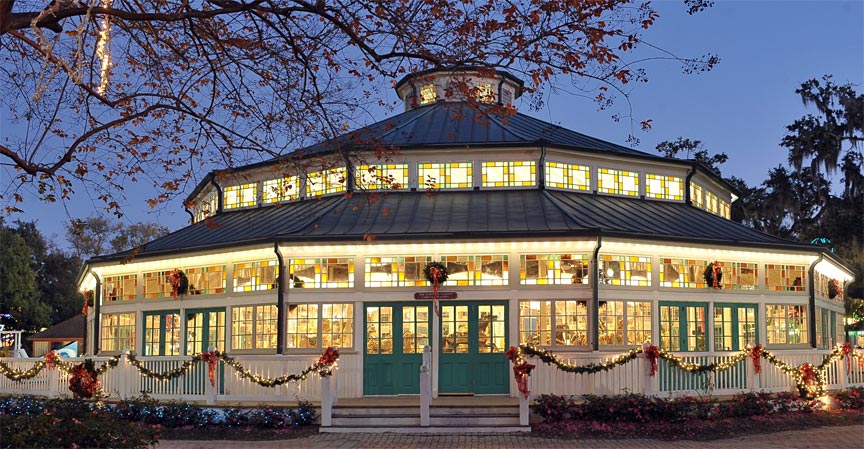 A close-up of one of the carousel's horses. They typically must be re-painted, by hand, on an annual basis due to their popularity. 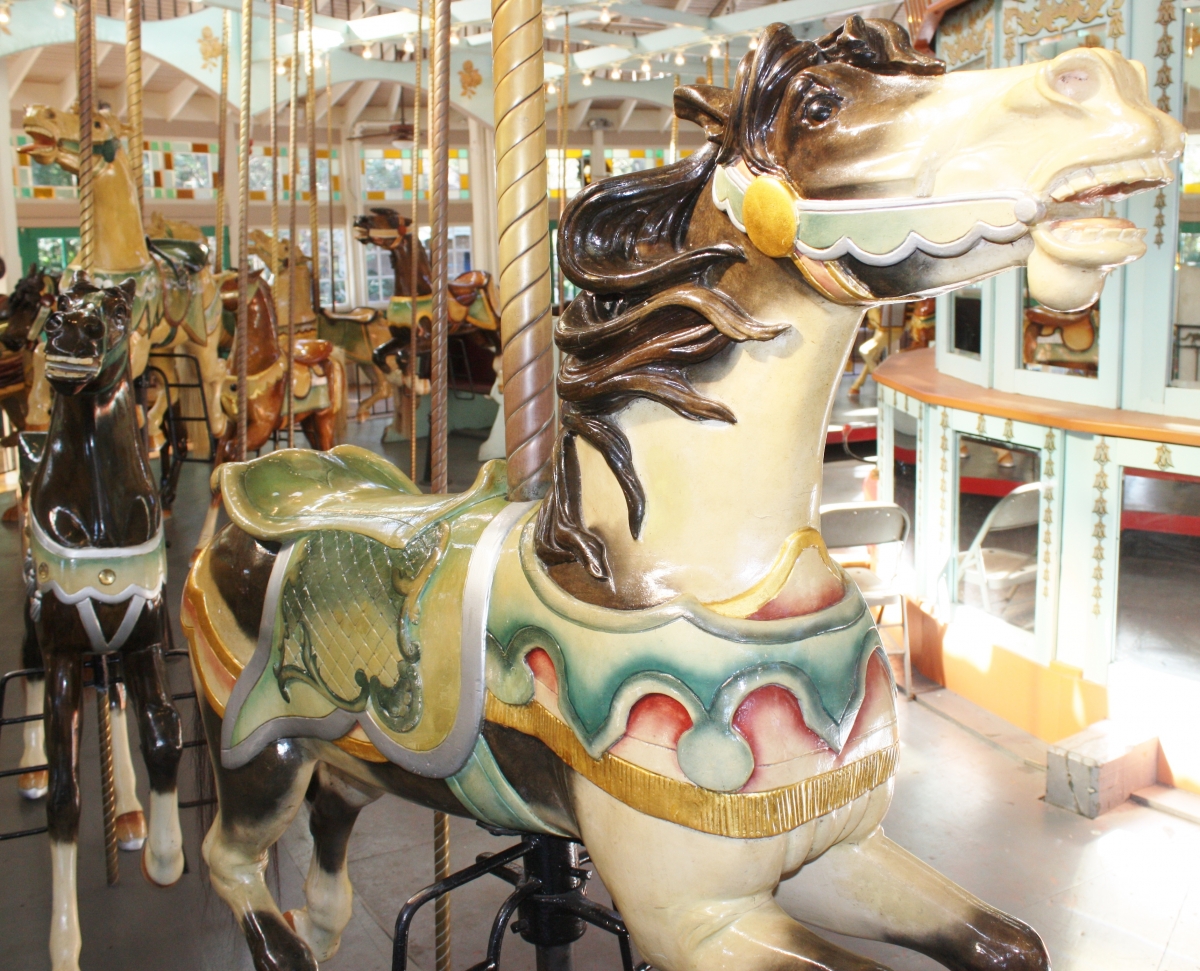 One of the few non-horses on the carousel is this 400-pound lion. 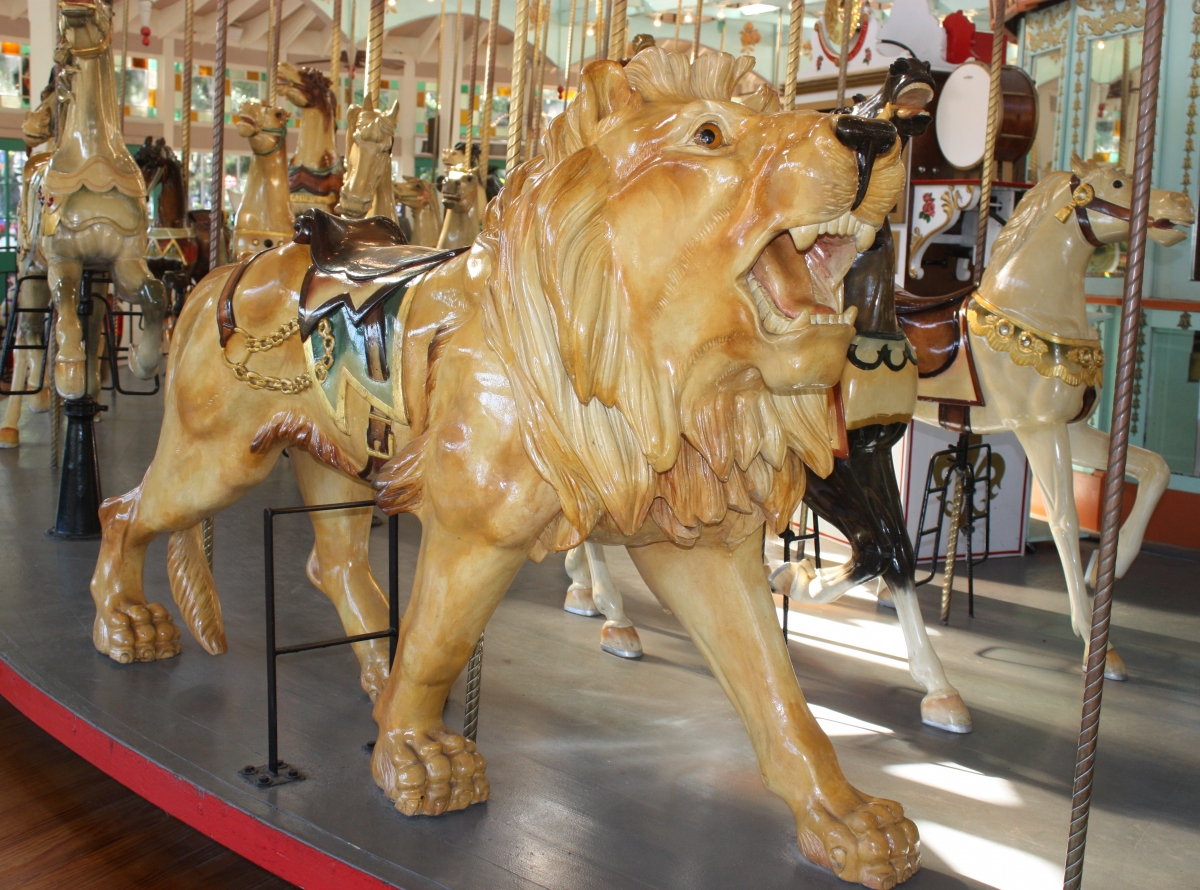 This aerial shot of the carousel was taken from the park's Ferris wheel. The city's skyline can be seen in the distance. 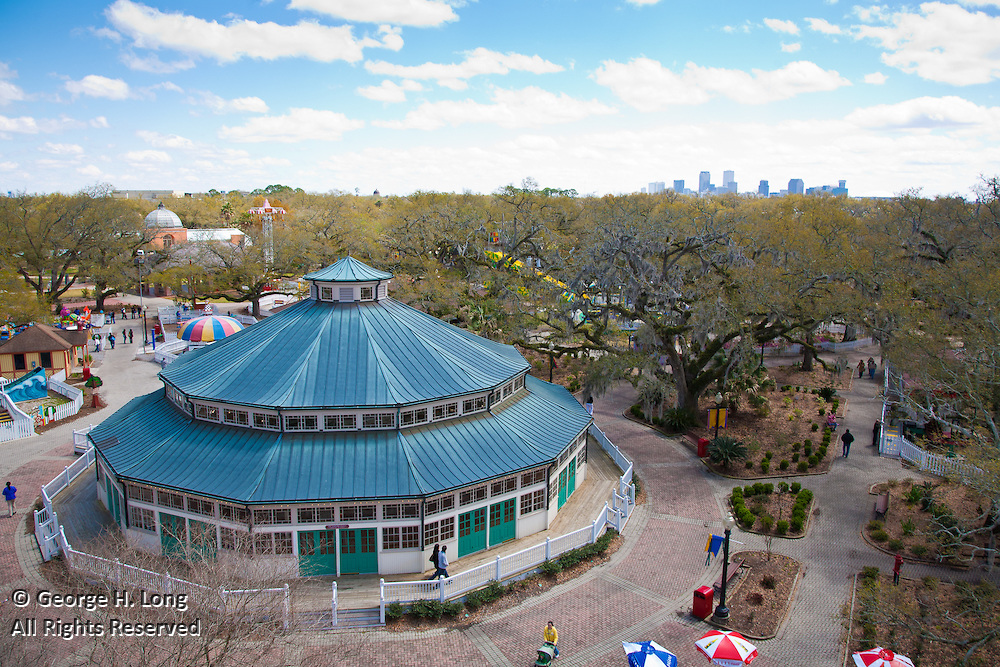 The carousel was built by Bartholomew Murphy, designed by his brother Timothy, and was originally located along City Park Ave.  The animals were carved by the renowned carousel firm owned by Charles Looff, assisted by Charles Carmel.  Some of the animals actually date back to 1885 and each is looked upon by many as individual pieces of hand-painted art.  As with most carousels, the majority (53) of the animals are horses and all still sport real horse-hair tails.  A 400-pound lion, a camel, and a giraffe round out the cast and two chariots are included as well.

Referred to as “Flying Horses” by many of the locals, the animals can be categorized according to their poses.  The “standers” have three feet on the ground, while the “prancers” have only their two hind legs grounded.  Lastly, the 30 “jumpers” or “flyers’ have all four feet separated from the ground and slide up and down.  The animals are ridden so often that they must be re-painted, still by hand, every year or so.  The carousel’s original motor is still in use as is its 1915 organ, which had to be repaired after Katrina.

Murphy operated the carousel until 1928 when it was disassembled and moved to its present location.  It was purchased from Harry Batt by the city in the 1980s after William Hines loaned the Friends of City Park $350,000 for the purchase and necessary renovations.  Hines later forgave the loan which is why the amusement park now bears his name.

After Katrina struck in 2005, the Friends of City Park once again came to the carousel’s rescue, raising almost $500,000 for its renovation.  Due to the fact that it stood in flood waters for three weeks, its platform and desk had to be replaced.  Thankfully, the animals were spared any serious damage as they sat above the waters.  All the animals were sent to a firm in Connecticut to be repaired and re-painted and the building was re-painted inside and out, while its 2,000 glass panels were all re-glazed.  A new sound system was also added.  The carousel went through another round of renovations during 2014-2015, when its two chariots eventually returned home.  Finally, Friends of City Park sponsors a behind the scenes look at many of City Park’s attractions, to include its famous carousel, during its “City Peek” tours offered during the summer months.