Kappa Alpha Psi, one of the oldest Black fraternities in the country, was founded at Indiana University in 1911. This marker is located in front of the university's police station, which was the once the location of the chapter's fraternity house, which was built in 1961. Black students at the university were not allowed to attend social events because of their race so a group of them decided to establish a Greek fraternity. Today, the fraternity is still active and has chapters all over the country. It does not exclude members based on race and as such has a small percentage of non-Black members. Like other fraternities, Kappa Alpha Psi emphasizes community service and social welfare. 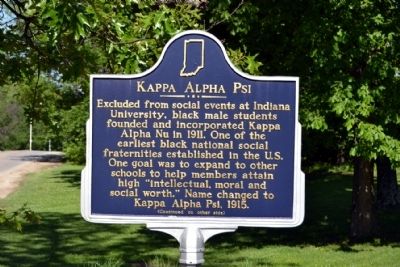