This local history museum is located within the former Monroe Carnegie Library. Constructed in 1917, the building has been listed on the National Register of Historic places since 1978. The museum has called this building home since 1980, a move that allowed for a significant expansion of the museum's holdings. Monroe County History Center currently boasts 8,000 square feet for its many galleries and exhibits, a genealogy and local history library, museum store, and education room. On the corners of the property stand two historical markers for the “Colored School” - or Center School - which opened its doors to African American children from 1874 to 1915 during the era of segregation. The second marker commemorates the building's role as Bloomington’s public library from the building's construction in 1918 to the creation of a new central library in 1970. Bloomington was one of 2500 communities that built a library with Andrew Carnegie's support as he donated an estimated $56 million for library construction. Though the town attempted many times to acquire public support and funds to build a library from 1897 to 1915, it wasn't until 1917 that the project finally came to fruition. Prior to that time, the library shared space with the courthouse. The library used the building from 1918 to 1970 and since 1994, the building has served as Monroe County History Center since that time. 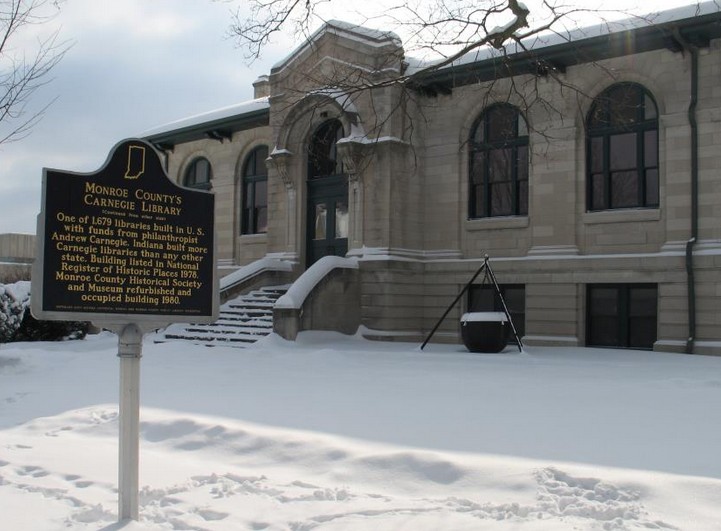 The Monroe County History Center originally served as the Bloomington Public Library. Built in 1917, it was one of many libraries created with the aid of a Carnegie grant and designed by architect Wilson Boyden Parker. 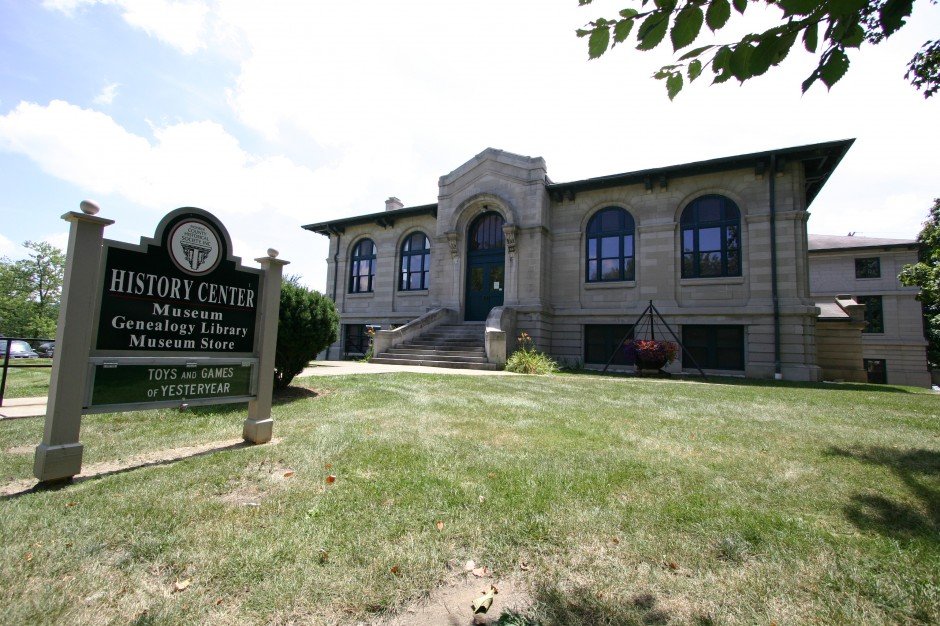 Before it was home to the Carnegie Library or the Monroe County History Center, this location served African-American students who attended Center School from 1874 to 1915. 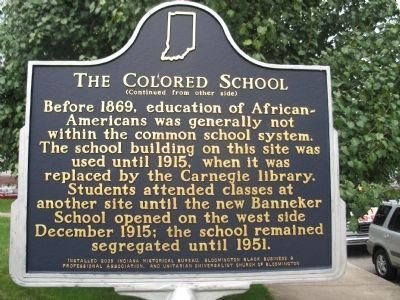 The original marker was vandalized in 2016, but it has since been restored and rededicated in its original location on October of 2017. 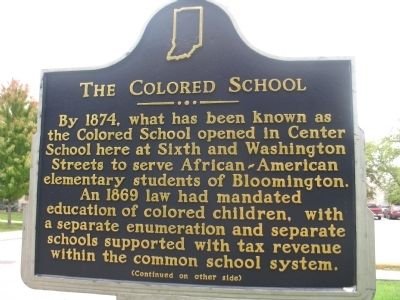 The struggle to give Bloomington a library was an arduous one that spanned over two decades. Thanks to the initiative and fundraising of women's societies like The Sorosis Club, Monroe County's Carnegie Library was built. 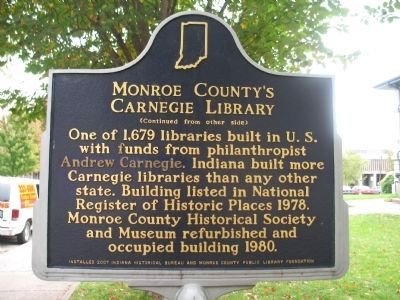 The library was retired in 1970 after the completion of a newer and more modern facility, but it now serves as the home of the Monroe County Historical Center where history is preserved for the entertainment and education of old and new generations. 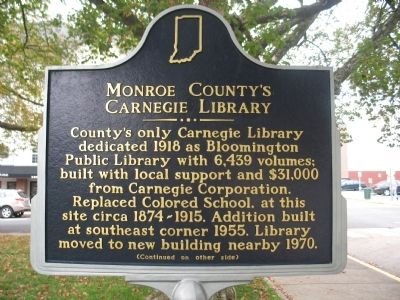 Andrew Carnegie, an industrialist steel tycoon, turned to philanthropy in his later years. He offered grants to help build libraries as long as local authorities matched his contribution by providing the land and money for operation and maintenance. 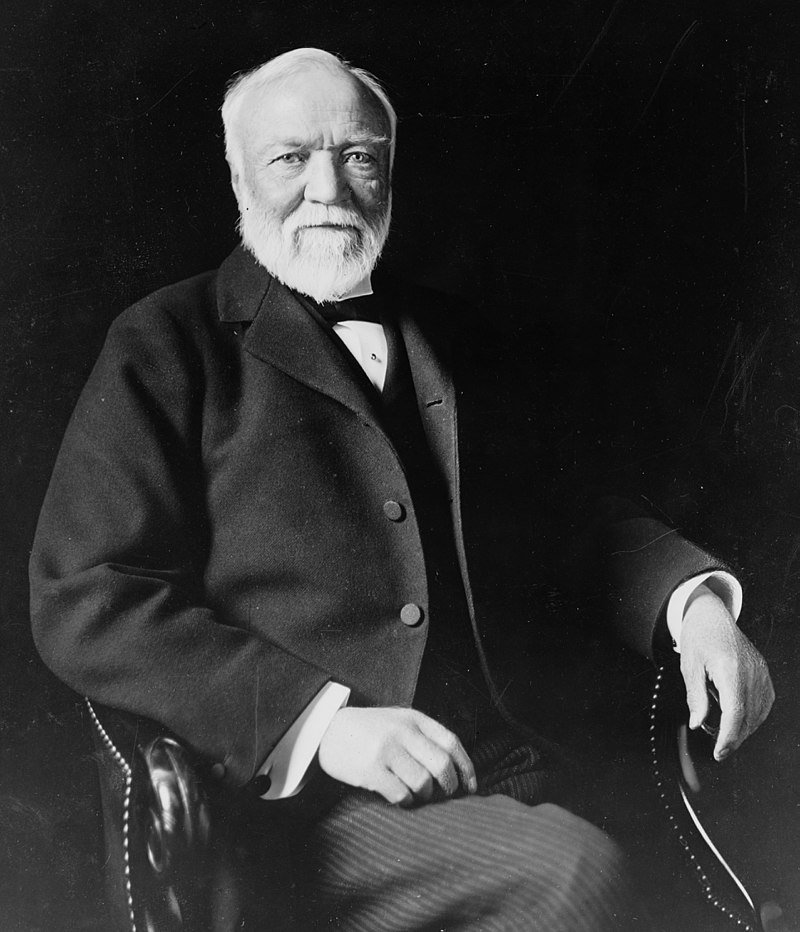 Bloomington's first library opened around the town's founding in 1821 and operated within a single room located in the log courthouse. By the end of the nineteenth century, a movement existed in the town to create a much bigger library. As is the case with numerous towns in the U.S., funding efforts included a grant provided by the Andrew Carnegie Foundation, which helped finance an abundance of libraries and public buildings.

The wealthy industrialist Andrew Carnegie (1835 -1919) enjoyed a complicated relationship with laborers and the lower class. In 1882, Carnegie and his partner instructed people to use violence against steelworkers during the Homestead Steel Strike (workers sought better pay and improved working conditions), arguably one of the worst labor conflicts in American history. Seven years later, in 1889, Carnegie wrote "The Gospel of Wealth" where he expressed his views on philanthropy: "In bestowing charity the main consideration should be to help those who help themselves." He eventually contributed $333 million (ninety percent of his fortune), to projects that mainly funded public buildings and community projects, especially libraries. Indeed, more than $56 million of his wealth went to constructing more than 2,500 libraries. Carnegie deemed the public projects the "improvement of mankind."

As early as 1897, two women's civic clubs led efforts to raise funds to construct a library in Bloomington; it took roughly two decades for their idea to manifest. The Sorosis Club attempted in 1897 to obtain a grant from Andrew Carnegie to help build a new library. The conditions of the grant stipulated that the funds would go towards construction, but the town had to provide the land and pay for the building's maintenance. However, when they included the proposal in the local referendum, it got lumped in with funding for a new courthouse and sewer system. The people ultimately voted to fund the courthouse and sewer system, but not the library. With the defeat of the Sorosis Club's plan, the Nineteenth-Century Club stepped in and reestablished the library in the new courthouse. A second attempt by the Sorosis Club to gain a grant from Carnegie emerged in 1915, with Carnegie first offering $15,000 and then $20,000. But, yet again, the proposal was overshadowed by another construction project. The town sought to build a hospital, and so the library proposal again failed to win public support. In 1917, the Library Board purchased land for $21,000 as part of the City Beautiful movement, and as was often the case, involved land that once catered to people of color; an all-Black school stood on the property purchased by the Library Board.

The Board asked for $40,000, but only received $31,000 (Carnegie originally offered $28,000). Wilson Boyden Parker, a Massachusetts Institute of Technology graduate, designed the library building. The library included several features championed by Carnegie such as a large, semi-circular fanlight above the main entrance that alluded to the rising sun (a symbol of knowledge and enlightenment). The building also contained a basement with a large room intended for use as an auditorium for civic and cultural events. In contrast to typical Carnegie libraries, the expansive, unadorned sheer wall rising above the fanlight is reminiscent of the Egyptian style. Like many of Bloomington's historic buildings, the town took advantage of its nearby bustling quarry industry and used substantial (and costly) limestone blocks for the library's exterior.

The library opened in 1918 with a collection of 2,000 volumes of books. From 1918 to 1929, Bloomington residents used the library freely, while country residents living outside the city limits paid a fee to borrow books unless their townships contributed toward the library's maintenance. In 1929, the library enjoyed enough financial health to provide free books to the entire county and even paid for such amenities as landscaping.

Prior to the construction of the current building, this site was home to a public school for African American children. Before the Civil War, children of African American descent were usually excluded from the public schools of the state. In 1869, the state of Indiana passed a law to mandate “the education of colored children" and left the issue of integration or racial segregation up to local school districts. This location was home to the city's "Center School" which practiced segregation. White children were allowed to attend classes on the first floor while black children received their lessons in an upstairs room. Because of population growth, a new school building was constructed. School leaders decided that the white children would attend the new school and Center School became known as the “Colored School” with a grand total of 54 African-American students attending in the year 1881. Schools in central and southern Indiana continued to operate segregated schools in a number of communities in the early 1900s even as most Midwestern communities ended the practice.

By 1915, the school property was sold to make room for the new public library that would take its place. By that time, the school’s numbers had risen to 93. These students and their 3 members of faculty would eventually transfer to the Benjamin Banneker School that opened on December 7, 1915. The historical marker on the corner of the museum property offers a short history of Center School and was installed in 2005 by the Indiana Historical Bureau, Bloomington Black Business & Professional Association, and the Unitarian Universalist Church of Bloomington.

The community was one of the first to have books available for use by local residents, as the county courthouse acquired a collection of books in the 1820s and allowed resident to borrow from this collection. According to the National Register of Historic Places nomination form, the decision to create a formal public library in 1917 was "the culmination of a long and tenacious struggle to bring literature and learning to Bloomington." That “tenacious struggle” began well before the 1915 purchase of the Center School location and was spearheaded by local women's civic societies such as the Sorosis and the Nineteenth Century clubs.

In 1897 the Sorosis Club first attempted to gain an Andrew Carnegie grant, but because the ballot put forward that discussed accepting his offer at the local referendum also contained questions about funding a new courthouse and sewer system, the measure was quickly defeated. Another offer by Carnegie for $20,000 was placed on the table in 1915, but needs for better health facilities had won public support and overshadowed the quest for a library. It wasn’t until 1917, after the purchase of their new plot of land, that everything finally began to fall into place. Carnegie Corporation gave them a grant of $31,000 and by 1918, architect Wilson Boyden Parker had brought their vision to life.

The basement evolved into a community center during the middle of the twentieth century. During World War II, the Red Cross volunteers used the facility for rolling bandages. A two-story rear wing was added in 1955 to accommodate the library's record, art print, and film collections. In 1970, after fifty-two years in operation, the building ceased functioning as a library. A 1947 renovation allowed the building to survive and since 1994, it has stood as the home to the Monroe County Historical Society (Monroe History Center).

When the library opened its doors in 1918, it had a collection of nearly 2,000 volumes and served over 400 city patrons. It was still primarily a town rather than a county library. County residents had to pay a fee to borrow books unless their townships contributed toward the library’s maintenance. In 1929, the policy changed, and the library began serving a county-wide clientele.1

The Carnegie Library would continue to serve the public until a new and more modern facility was opened on Kirkwood Avenue in 1970. It was then purchased by a nonprofit organization, The Old Library Inc. (TOLI) who renovated the building and, by 1980, had leased it to other nonprofit organizations such as the Bloomington Area Arts Council, the Monroe County Historical Society.

TOLI eventually sold the building to its current owners, the Monroe County Historical Society, in 1994. They have since expanded upon the original building where they now exhibit both permanent and rotating galleries aimed at educating the public and preserving history for the generations to come.