This monument to Kentucky Congressman Henry Clay is located in the center of the Lexington Cemetery. Clay is most remembered as the driving force behind both the Missouri Compromise and the Compromise of 1850. Clay died from tuberculosis in 1852 and was brought back to Lexington for his burial. Plans to erect a monument in his memory were made almost immediately, though they did not come to fruition until 1857. The monument consists of a limestone mausoleum, a 120-foot tall column, and a statue of Henry Clay. Clay and his wife Lucretia are interred in a vaulted chamber at the base of the monument.

A close-up of the statue atop the Henry Clay monument. Photo by Sydney and Russell Poore. 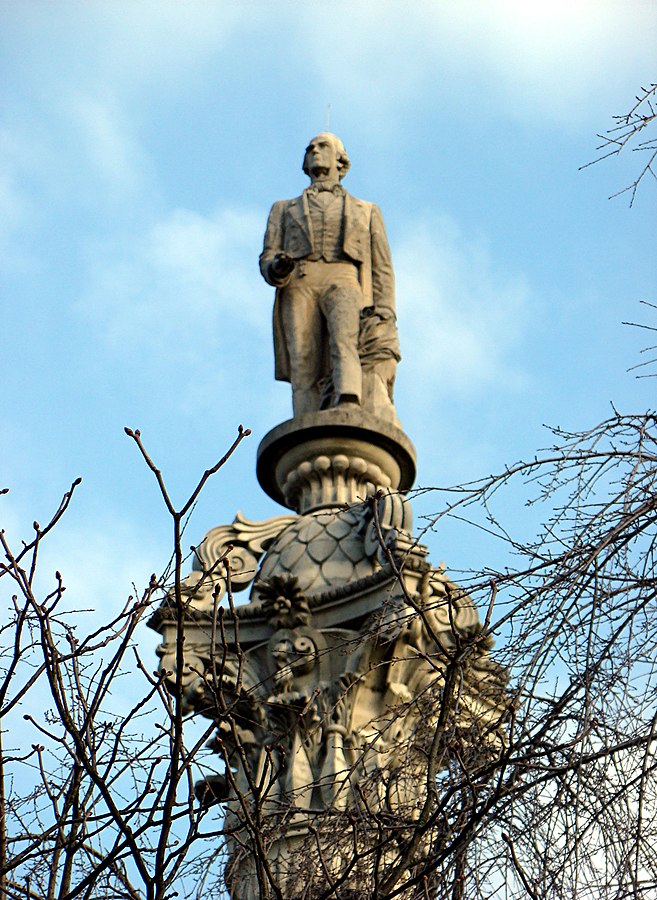 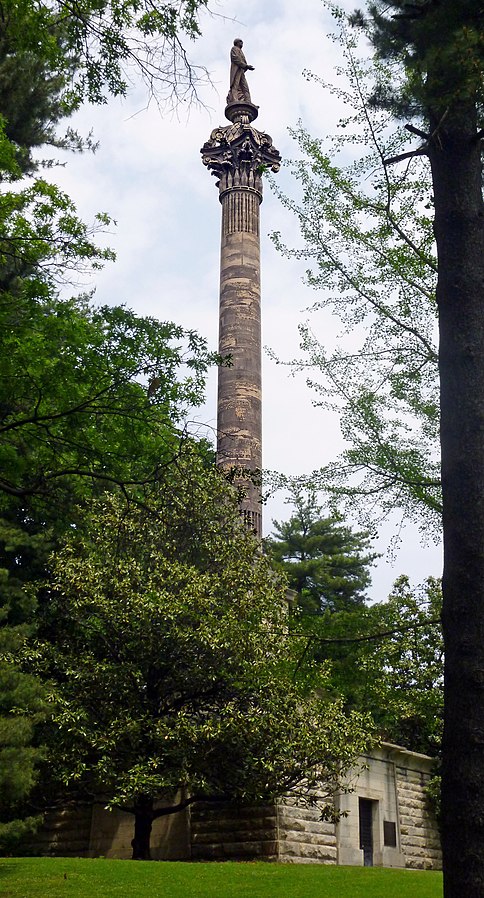 Henry Clay was born in Hanover County, Virginia on April 12, 1777. After establishing a law practice in Lexington, Kentucky, Clay was elected to the state legislature in 1806. He would continue to serve as a Representative and a Senator for many years, at one point becoming the Speaker of the House. He earned the nickname “the Great Pacifier” due to his work with the treaty that ended the War of 1812 and for later spearheading the Missouri Compromise and the Compromise of 1850. Clay died from tuberculosis in 1852 and requested that his remains be buried in Lexington. After Clay’s death, his body was taken to more than a dozen cities in ten days for various services before it arrived in Lexington. A few days later, it was interred in the Lexington Cemetery.

Soon after Clay’s funeral, locals began planning a memorial for the cemetery. The final plan for the monument was designed by Julius W. Adams, a civil engineer and architect. John Haly of Frankfort was hired to bring Adams’s vision to life under Major Thomas Lewinski’s supervision. The cornerstone for the Clay family mausoleum was laid on the Fourth of July in 1857. It was not until 1864, shortly after Clay’s widow Lucretia Hart’s death, that his remains were moved to the finished structure.

On July 21, 1903, a storm knocked the head off of the Henry Clay Statue. It was not repaired until after the General Assembly in charge of the monument’s care raised $10,000 in 1908. Charles J. Mulligan carved the new statue, which was put into place in May 1910. Merely a few months later, another storm struck the statue, causing damage to its right side. Another $10,000 were set aside to repair it. But, after decades of wear, the statue began to deteriorate. This time, however, the Clay Monument Association to longer existed to look after the statue’s maintenance. Because the Lexington Cemetery had deeded the monument’s property to the association, it was not responsible for upkeep, though employees did keep the grass trimmed and the mausoleum clean.

Finally, the Fayette Circuit Court gave ownership of the monument to the Urban County Government in the 1970s. $35,000 were raised for the statue’s restoration. The M and A Company came down from Cleveland, Ohio for the job. The statue was scrubbed and painted. Its broken pieces, old mortar, and a lightning arrester were replaced. New iron gates were added. On July 29, 1976, the monument was rededicated.