This marker commemorates the day when Theodore Roosevelt and 170 of his volunteer soldiers "Rough Riders" arrived in Pensacola on June 1, 1898. The city welcomed them and bid them good luck on their journey to Cuba to fight Spain (in the Spanish-American War), which at that time controlled the island. They were on their way to Tampa, Florida from which they would meet the rest of the Rough Riders and then sail to Cuba on June 8; they arrived on the 22nd. 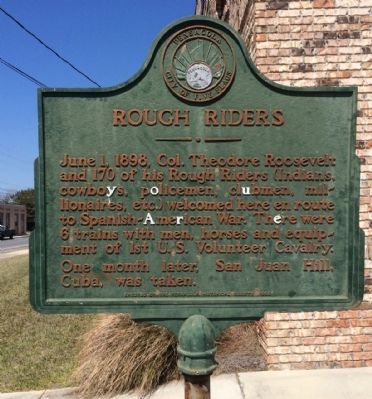 Roosevelt in his Rough Rider clothing. 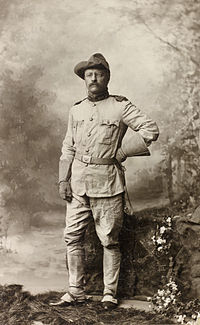 The Rough Riders were a diverse force of Native Americans, cowboys, miners, military service members, police and anyone capable of riding a horse and shooting a gun. Led by Roosevelt, on July 1, 1898, they led the charge up San Juan Hill to attack a Spanish position that protected the city of Santiago. This was a crowning moment for Roosevelt, who led the charge on his horse, Texas; he called this moment his "crowded hour." The American forces held onto the hill until the 17th, when the Spanish surrendered. Roosevelt's prestige only grew after the war and he would forever be associated with San Juan Hill.