Built around 1805, the Lavalle House is one of Pensacola's oldest remaining structures. It was constructed by Charles Lavelle, who worked as a brick mason and also as a real estate developer. Lavelle built the house during the final period of Spanish occupation (1781-1821). It is made out of wood and also brick, which makes it somewhat unique since most houses from that time were built out of wood only (which is a reason why very few remain today). Today it is a museum owned and operated by the University of West Florida Historic Trust. Inside, visitors will see the authentic 18th and 19th century artifacts. Docents dressed in period clothing also provide guided tours.

The Lavalle House was built ca. 1805 by its namesake, Charles Lavelle. It is one the last homes built in the final period of Spanish occupation. 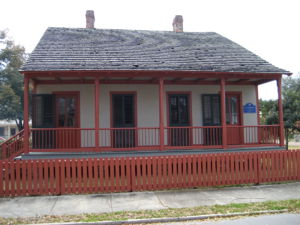 Charles Lavelle lived in the house until 1815. Successive owners largely kept the house intact. The Historic Pensacola Preservation Board moved it to its current location in 1969, thereby saving it from demolition.