Completed in 1901, Philadelphia’s Independence Hall is flanked by two buildings: Congress Hall, where the country’s first congressional sessions took place, and Old City Hall. That structure is the city’s second city hall and it did not exclusively serve as a seat of government for much of its history. Designed by David Evans Jr., in the Federalist style, Old City Hall was completed in 1791 and then shut down in 1854. Old City Hall shared space with the U.S. Supreme Court until 1800 when the federal capital moved the court to Washington D.C. It is part of the Independence Hall Complex which is contained within the larger Independence National Historical Park. 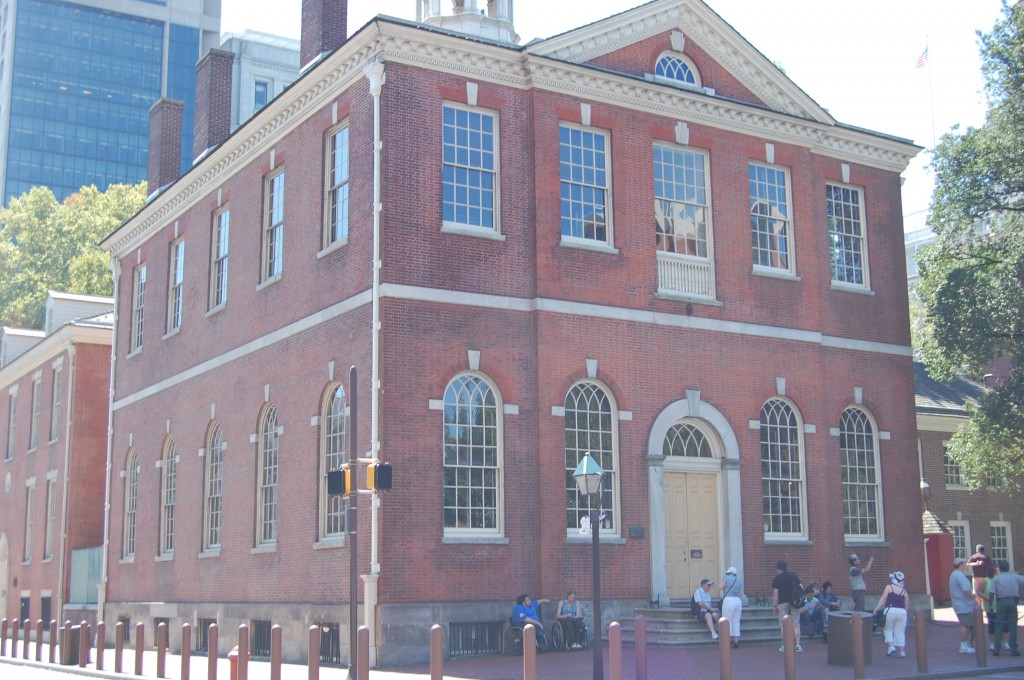 The court, as it existed in the last decade of the 18th century, has been recreated by the Independence National Historical Park. 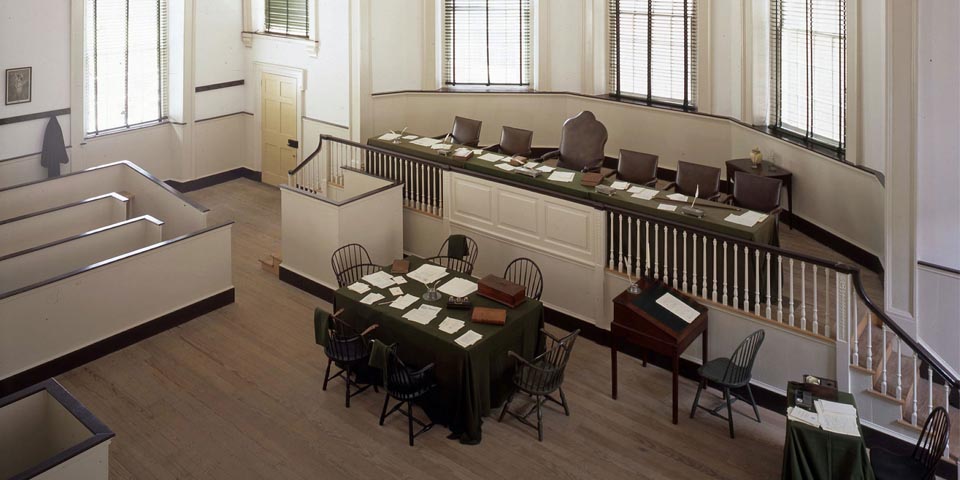 The plaque that adorns Old City Hall identifies the years it served as home to the Supreme Court, its Chief Justices that served here (John Jay, John Rutledge, and Oliver Ellsworth), and the years its was home to city hall. 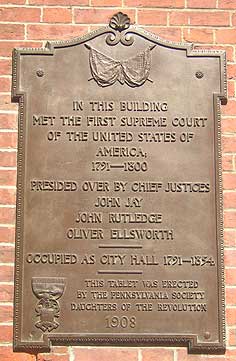 Another view of the courtroom and its jury box. Unlike today, some cases heard by the Supreme Court involved a jury. 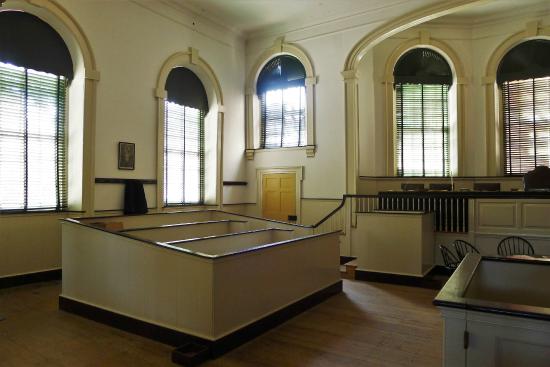 Philadelphia’s first city hall was located near the Delaware River on 2nd Street and was built during the lifetime of William Penn. Construction on the city’s second city hall, now known as Old City Hall, began in 1790 and was completed the next year. This simple building is an excellent example of Federalist architecture and features Palladian windows. The mayor’s office and council chamber were located on the second floor, while the first floor was home to the Mayor’s Court. However, it came to share space with the United States Supreme Court while Philadelphia served as the federal capital from 1790-1800.

The creation of a Supreme Court was called for in Article III of the U.S. Constitution and the Judiciary Act of 1789 brought it into the open. In 1791, it first met in the Merchants’ Exchange building of New York City and later transferred to Philadelphia in order to join the rest of the federal government. It initially consisted of a chief justice with five associate justices. However, during its early years, the Court had little power. In fact, it heard no cases for the first two years of its existence. Also, the justices served as “circuit riders” as the country was divided into different “circuits” or courts. They often considered cases alongside local judges despite the travel difficulties this practice created. This practice was officially abolished in 1891.

The first real case of significance heard by the Supreme Court was the Chisholm v. Georgia case in 1793. In this case, a resident of South Carolina sought to recoup payment from Georgia for goods supplied during the Revolutionary War. The Court ruled in favor of the plaintiff. However, the decision was overturned by passage of the 11th Amendment into the Constitution. Another case of consequence was the 1794 Georgia v. Brailsford case that dealt with the issue of repaying debt after the colonies gained their independence from Britain.

This case was reenacted in 2016 by Chief Justice John Roberts and Justices Stephen Breyer and Samuel Alito in Old City Hall.

Old City Hall also served as the volunteer headquarters during Philadelphia’s yellow fever epidemic of 1793. Many African-Americans, working under the umbrella of the Free African Society, to include Richard Allen and Absalom Jones, labored within Old City Hall to ease the pain of the afflicted. Additionally, Old City Hall hosted municipal government courts and served as the city’s immigration center during the 19th century. Today, visitors can view the room where the Supreme Court met, which has been adorned with period furnishings although not all are original to the room.