The Powel House, now owned and operated as a period house museum by the Philadelphia Society of the Preservation of Landmarks, is a Georgian row house that was built in 1765. It is located in the Society Hill neighborhood of the city and its most famous resident was Samuel Powel who served as Philadelphia’s mayor both before and after the Revolutionary War. The house was saved from demolition and then fully restored by the society in the 1930s. It has been restored with period furnishings and decorative arts from the Revolutionary War era and is now open to the public for guided tours and available for rental as a wedding or other special event venue.

The Powel House as seen from its garden that hosts numerous wedding receptions and other celebratory events. 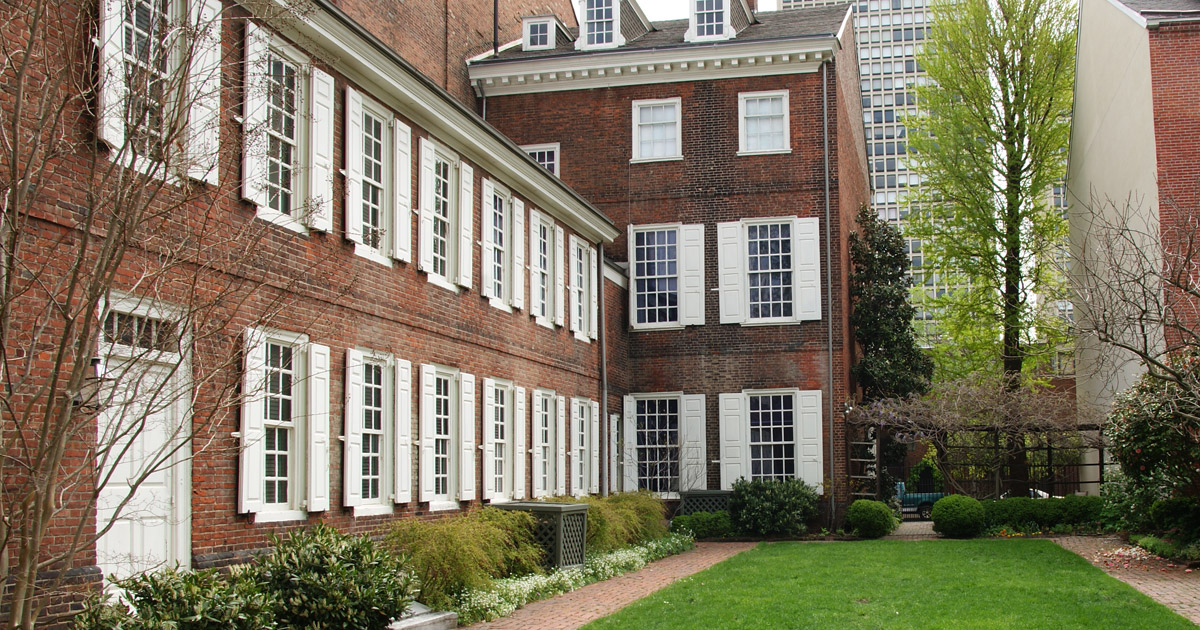 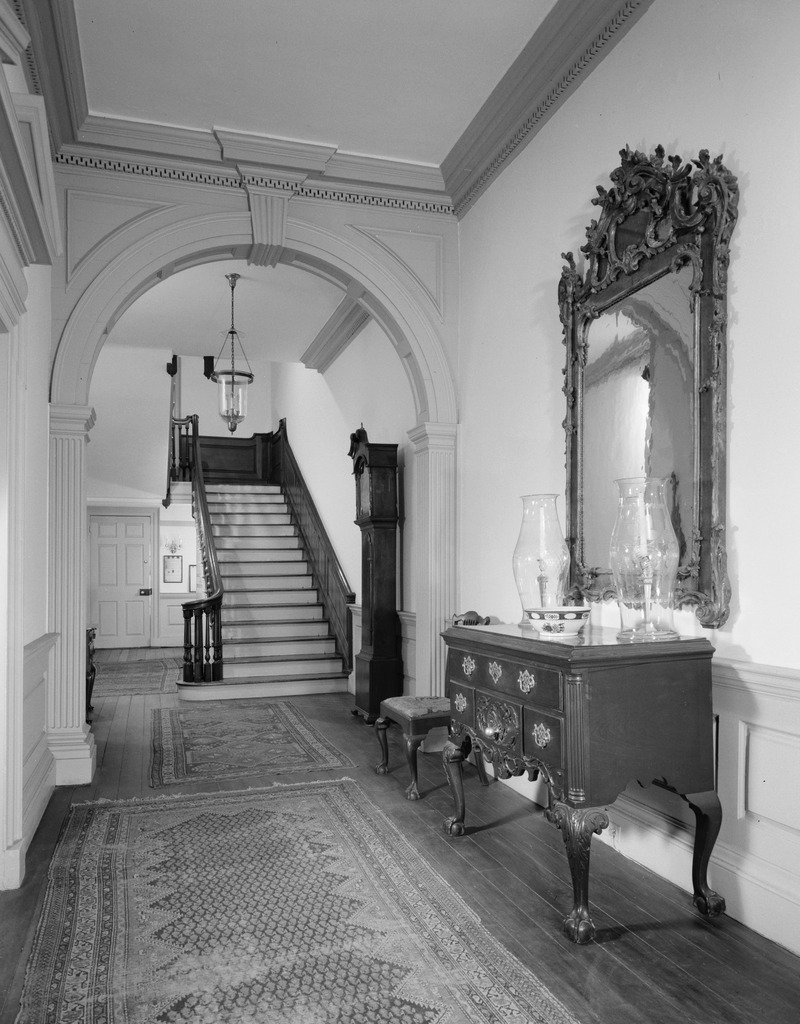 A bride contemplates her upcoming nuptials in the Powel House's front parlor. 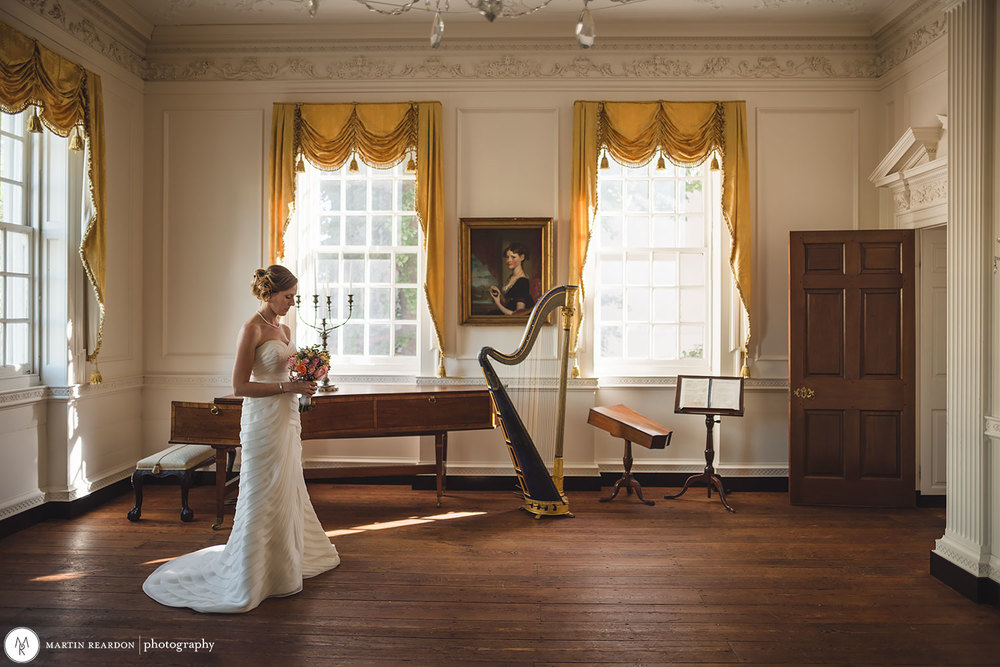 A 1799 painting of 3rd Street by William Birch that includes the Powel House (center right) with its 3-story half-turret. 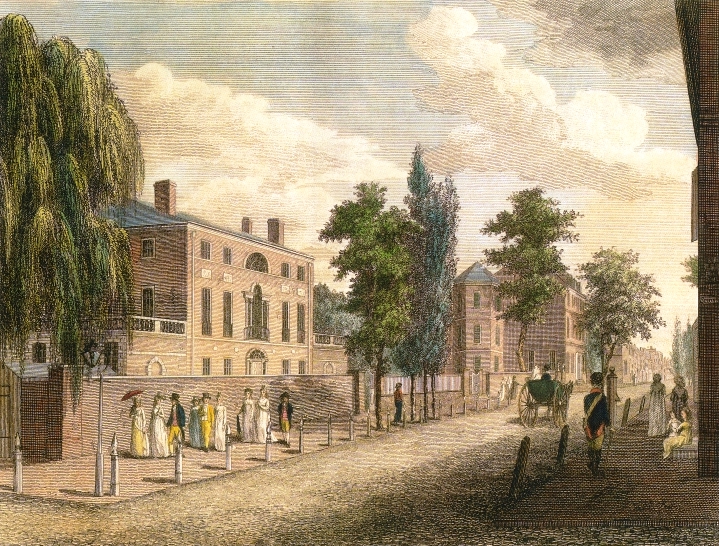 A portrait of Samuel Powel, the "patriot mayor" and home's most famous resident. 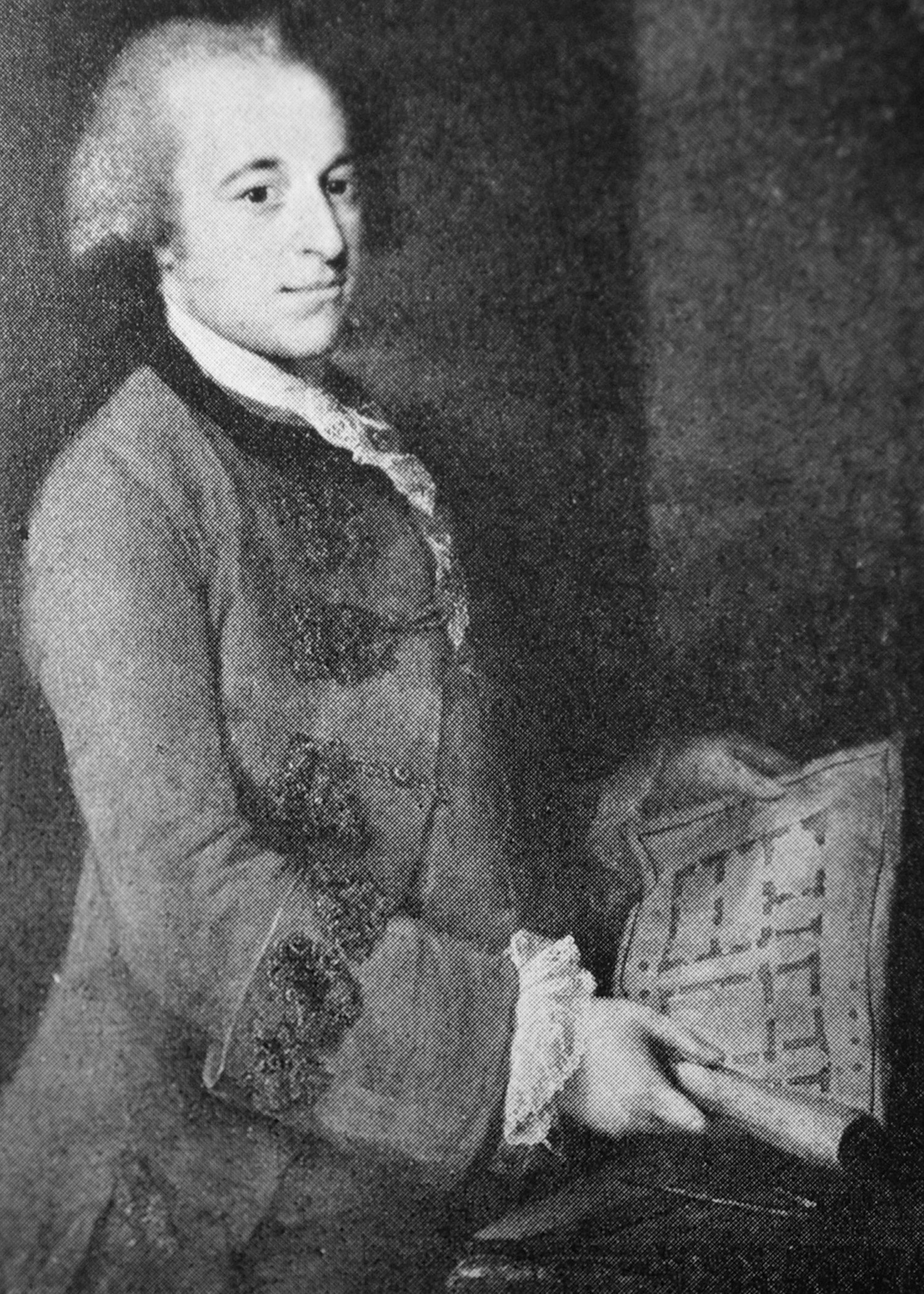 The Powel House is thought to have been designed by Scottish born architect, Robert Smith, who also designed Carpenters’ Hall.  It was originally built for wealthy merchant Charles Stedman.  However, Stedman never lived in the home as he fell into financial difficulties and ended up in debtor’s prison as a result.  Four years after it was built, the home was purchased by Samuel Powel and his wife Elizabeth, in 1769.  Due to his loyalty to the colonies during the Revolutionary War, Powel is often referred to as the “patriot mayor.”

The Powels made some dramatic alterations to the house by adding a second-floor ballroom, ornate plaster ceilings and intricately carved woodwork.  They also added windows that over looked the garden and a 3-story half-turret (a bay window style addition) to the home’s exterior.  However, it was removed sometime during the mid-19th century.

Powel House is perhaps best known for those who dined and were entertained within its walls as it was frequented by many members of Philadelphia’s glitterati (or is that illuminati?) both before, during and after the Revolutionary War.  The list of visitor’s that passed through its threshold is a who’s who of the Revolutionary era.  They include: Benjamin Franklin, Benjamin Rush, John Adams, the Marquis de Lafayette, and George and Martha Washington.  In fact, the Washingtons wintered next door to the Powel House after the Battle of Yorktown, from November of 1781 through March of 1782.  During that time, they were frequent guests of the Powels.  The home was also temporarily “visited” by the British during their occupation of Philadelphia during the Revolutionary War.

Samuel Powel died during the yellow fever epidemic of 1793 and his wife, Elizabeth, lived in the home until her death in 1830.  It then passed to her nephew, John Hare Powell who served in the War of 1812, founded the Pennsylvania Agricultural Society in 1823, and was a Pennsylvania State Senator from 1827-1830.  By the early 20th century, after the area around it had industrialized, the home served as a warehouse and manufacturing center for Wolf Klebanksy.  During this time, parts of the interior were sold off to other museums, to include the architectural woodwork of the second-floor parlor and ballroom, as well as its plaster ceiling.

The house was then scheduled for demolition to make way for an “open air garage” in 1930.  It was saved, largely by the efforts of Frances Wister and his Philadelphia Society for the Preservation of Landmarks, when they purchased it in 1931.  The society then hired architect H. Louis Duhring Jr. to restore the house to its Revolutionary era grandeur.  He fully restored the gutted house and the society then opened it to the public as a means to glimpse the daily lives of wealthy Philadelphians from the late 18th and early 19th centuries.