The McConnell Springs site has held numerous purposes and been witness to various historical events over the years. The land was first settled by William McConnell in the 1770s. It was near the springs that McConnell and his fellow surveyors heard about the Battles of Lexington and Concord, prompting them to name the town they were establishing Lexington. The property was then used mostly as a farm, though gunpowder mills that supplied powder for the War of 1812 were here for a time. The property has also been home to a distillery, a dairy farm, and a gravel mining company. In the 1970s, McConnell Springs had become an unofficial dump, and the possibility of companies developing the land for industrial use loomed. To protect the site, Bank One donated it to the City of Lexington in 1993 while the Friends of McConnell Springs raised funds for the remaining acreage and its care. Today, McConnell Springs is a park with an educational center and a few historic sites. 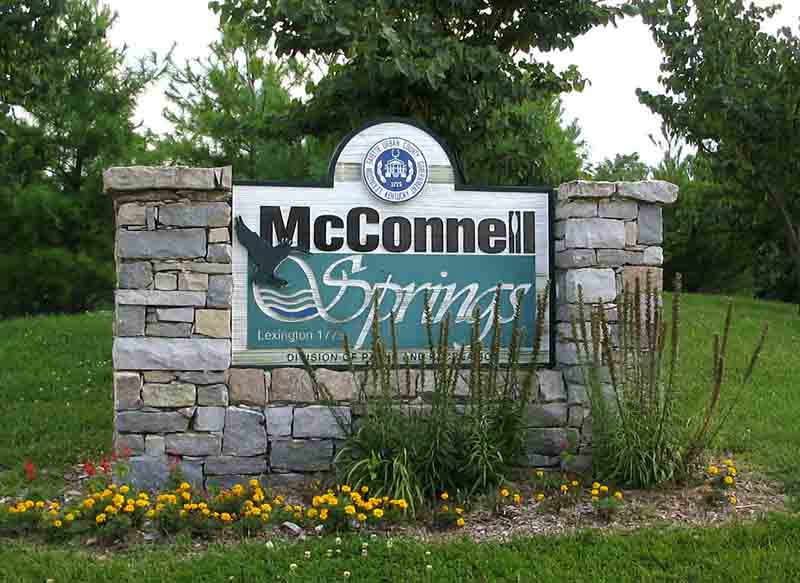 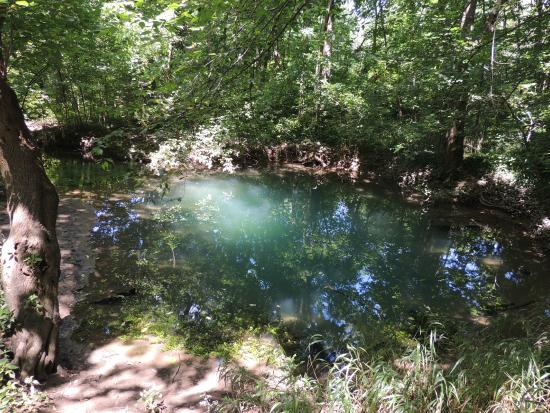 McConnell Springs Park was a campsite for a group of surveyors in 1775, including William and Francis McConnell. 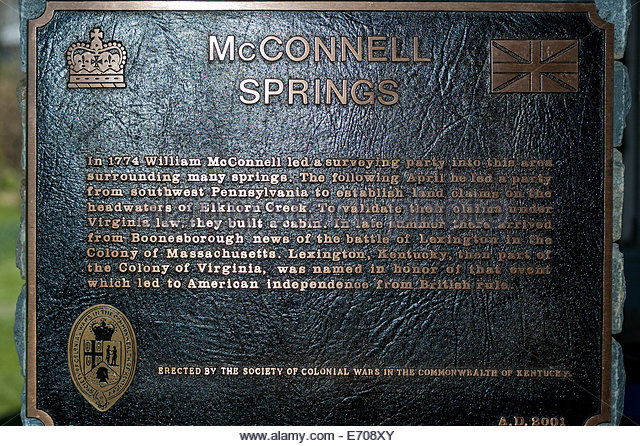 In 1774, William McConnell, his brother Francis, and other surveyors arrived at what would become Lexington, Kentucky. The group set up a site while they explored the land near the Elkhorn River. William and Francis claimed hundreds of adjoining acres, with William’s including the “sinking springs” guests now see at the McConnell Springs Park. Before building on their new property, the brothers continued to stay at the campsite with other surveyors. Local legend suggests that while at the campsite, the men heard about the Battles of Lexington and Concord, the first military conflicts of the Revolutionary War. The group then decided to name the new town they were planning Lexington in commemoration of the event.

In 1776, William and Francis built their first log cabin on their property, but in the coming years, attacks by England’s Native American allies drove many Kentuckian settlers away. Those who remained, including William and Francis, stayed in nearby forts. The McConnells stayed at Fort Harrod until 1779 when they helped build a new fort in Lexington. Afterward, they, like other settlers, returned to developing their land, building a stockade on Francis’s land in 1780. Francis later died there in 1783. He left his share of the land to older brother James McConnell, who, in turn, left it to his family when he died sometime between 1790 and 1796. His branch of the family later sold their property in the early 1800s.

In 1810, members of the McConnell family sold over one-hundred fifty acres of their land to the Trotter family, who used it for a gunpowder mill. Once Samuel Trotter, the head of the venture, passed away in 1834, the executors of his will sold it to Thomas Smith. Smith, a newspaperman by trade, turned the acreage into a farm called Westbrook, though he kept the gunpowder mill running. Three years after a fatal explosion in the mill in 1839, which killed two, Smith sold the land to a William H. Richardson. He then sold it to Andrew Jackson Reed in 1850. Reed used the land for farming briefly before selling it to John N. Wilson in 1859.

Wilson, his wife Laura, and their adopted daughter Virginia Dillon lived here until 1886. In the meantime, the property became known as Wilson Springs. By this time, the former gunpowder mills were likely gone or deteriorated. Over the years, the city sent officials to decide if the springs would be good for a public water system. One engineer from Holley Water Works in New York declared that they were, but because of the springs’ varying water levels throughout the year, the project never came to fruition.

David Cahill bought the land in 1886. Cahill hailed from Ireland, and he worked in Connecticut for a short time before arriving in Lexington. He found work as a dairyman and married Ellen Shivvers in 1873. The couple had six children before moving to the springs. Three years later, in 1889, Cahill accepted an offer for the Louisville Southern Railroad Company to build a line through the center of his farm. Today, this track marks the edge of the McConnell Springs Park. Cahill died in 1933, and his family continued to run the dairy farm before selling it in 1958 to Central Rock Co., Inc. For a time, the company leased out the property for agricultural use. However, by the 1970s, they quit this practice and razed the remaining old buildings on site. Shortly thereafter, people began to mistreat the land, using it as an unofficial dump.

After Lexington-Fayette Urban County Government planner James. R. Rebmann visited the springs in 1974, he began to advocate for their use as a city park. The county did not accept his proposal, however, and in 1985, the land ended up in the hands of new owners, who agreed to let the land be developed by the Dallas Development Corporation for an industrial park. The corporation offered five acres to the city on the condition the local government would buy fifteen additional acres. Though local preservationists and environmentalists rallied behind this plan, the city government declined.

Soon after, the Dallas Development Corporation was forced to declare bankruptcy, and the title to the property reverted to the First Security National Bank & Trust Company. Again, local activists called for the springs to be turned into a park, but because of potential environmental hazards, among other factors, a final decision was not reached for some time. After a favorable environmental report, Bank One (the purchaser of First Security Bank) agreed to donate most of the acreage if the city would buy the remaining 3.5 acres for $130,000 by 1993. The Friends of McConnell Springs group organized to raise money for the endeavor. Though the springs themselves were not included in the purchase, remnants of some of the historical buildings were.

Once they had secured the 3.5 acres for the City of Lexington in 1994, the Friends of McConnell Springs then turned their attention toward restoring the land. The group raised money and held a public forum on how the land should be developed. The two recurring purposes were education and leisure. As such, the Friends of McConnell Springs have since established an education center, amphitheater, and trails on the site. Tours based around subjects such as botany, geology, and history are held every weekend. The annual Founders’ Day activities teach visitors about Lexington’s early settlement. Guests today can also see the Blue Hole (one of two major springs, which is so blue because of its unusual depth), the Boils (another spring, named for the way it appears to be boiling after it rains), and the Bur Oak Tree (a large 250-year-old tree.