This English Tudor-style castle was the home of the founder of Colorado Springs, General William J. Palmer. This 1903 castle has close to 30 rooms within and was used by the Palmer family for a number of years, which had been styled on behalf of Palmer's wife, Mary (also known as Queen), to remind her of England. The castle is now used by a Christian para-church organization called the Navigators. It is also used as a conference center and retreat for companies. 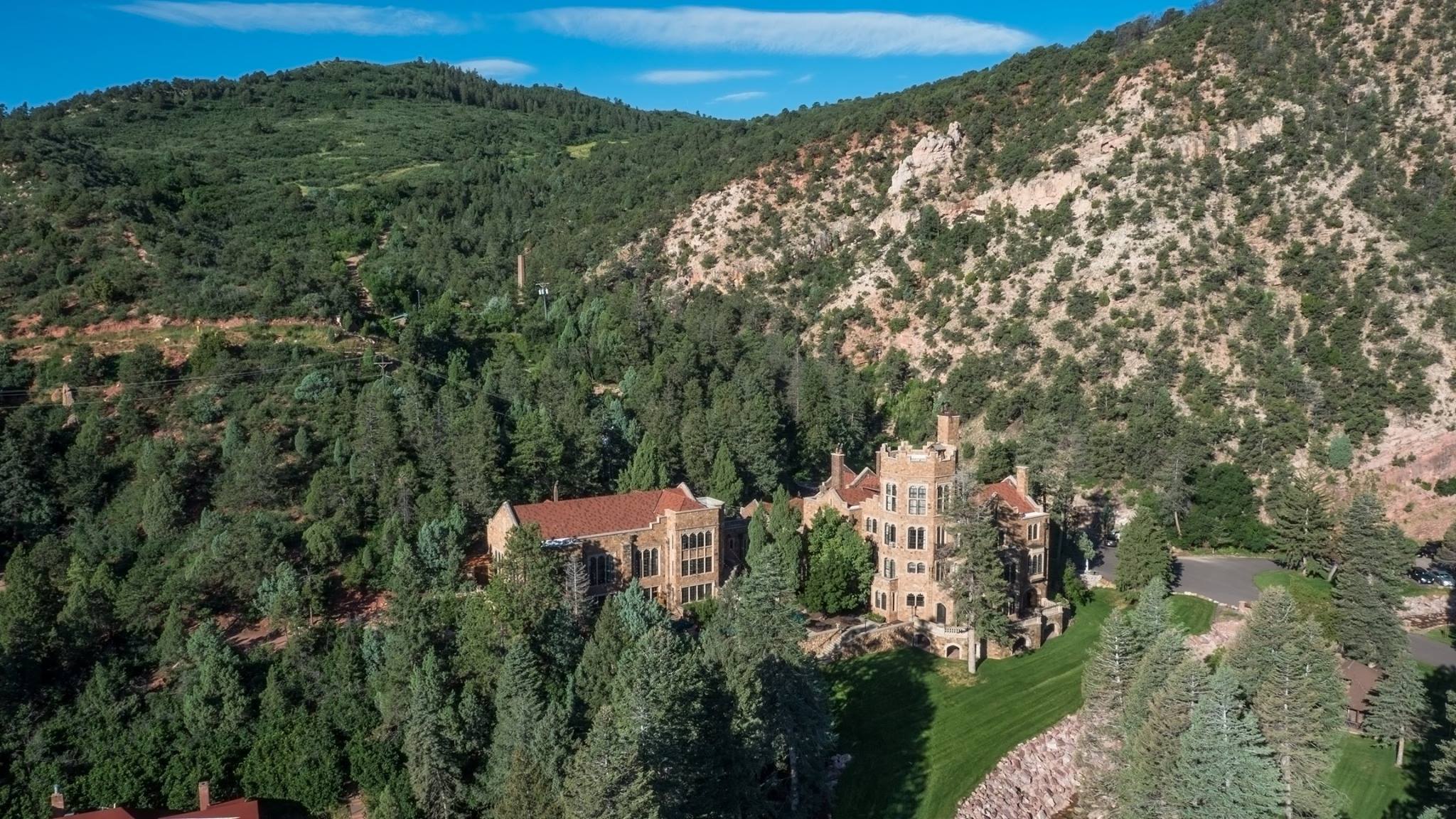 Glen Eyrie as it looks today 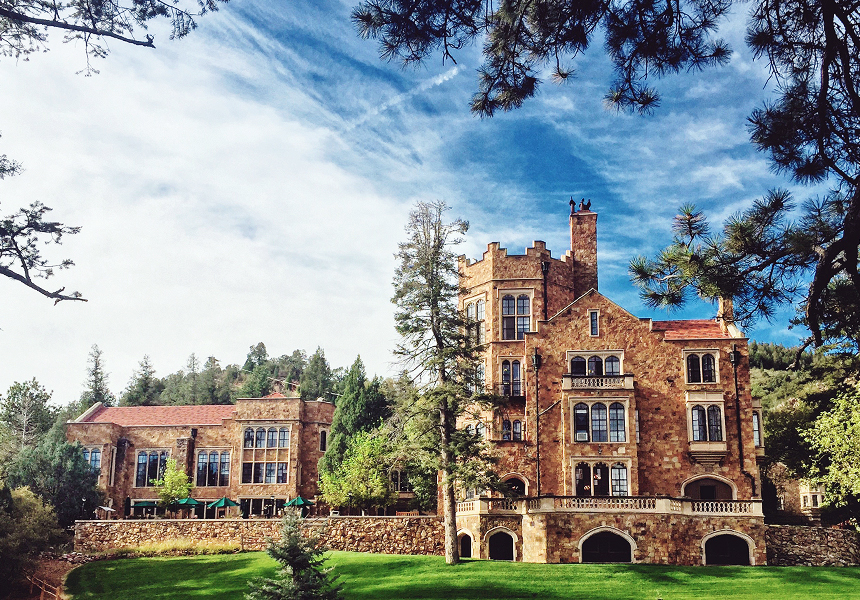 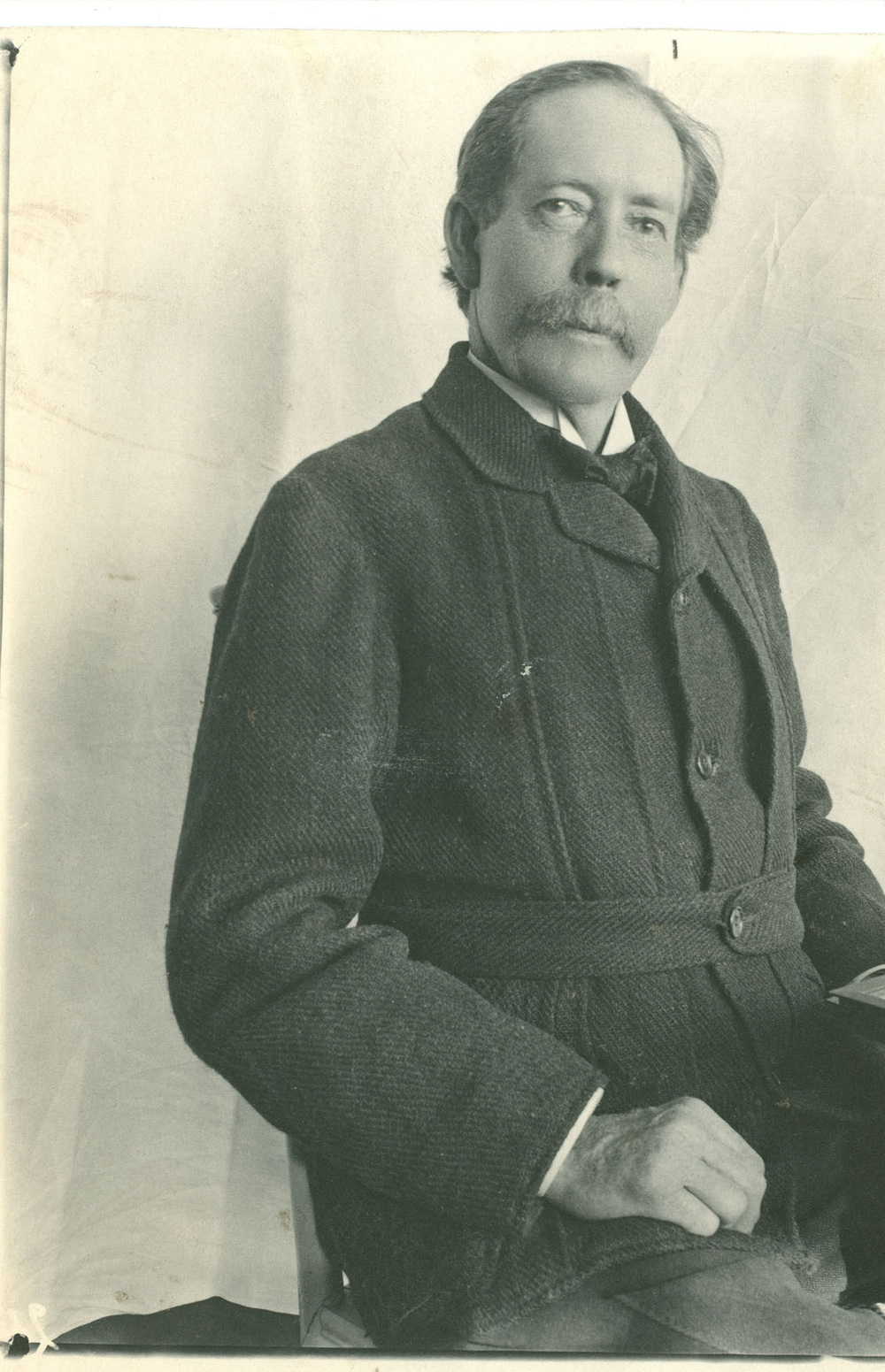 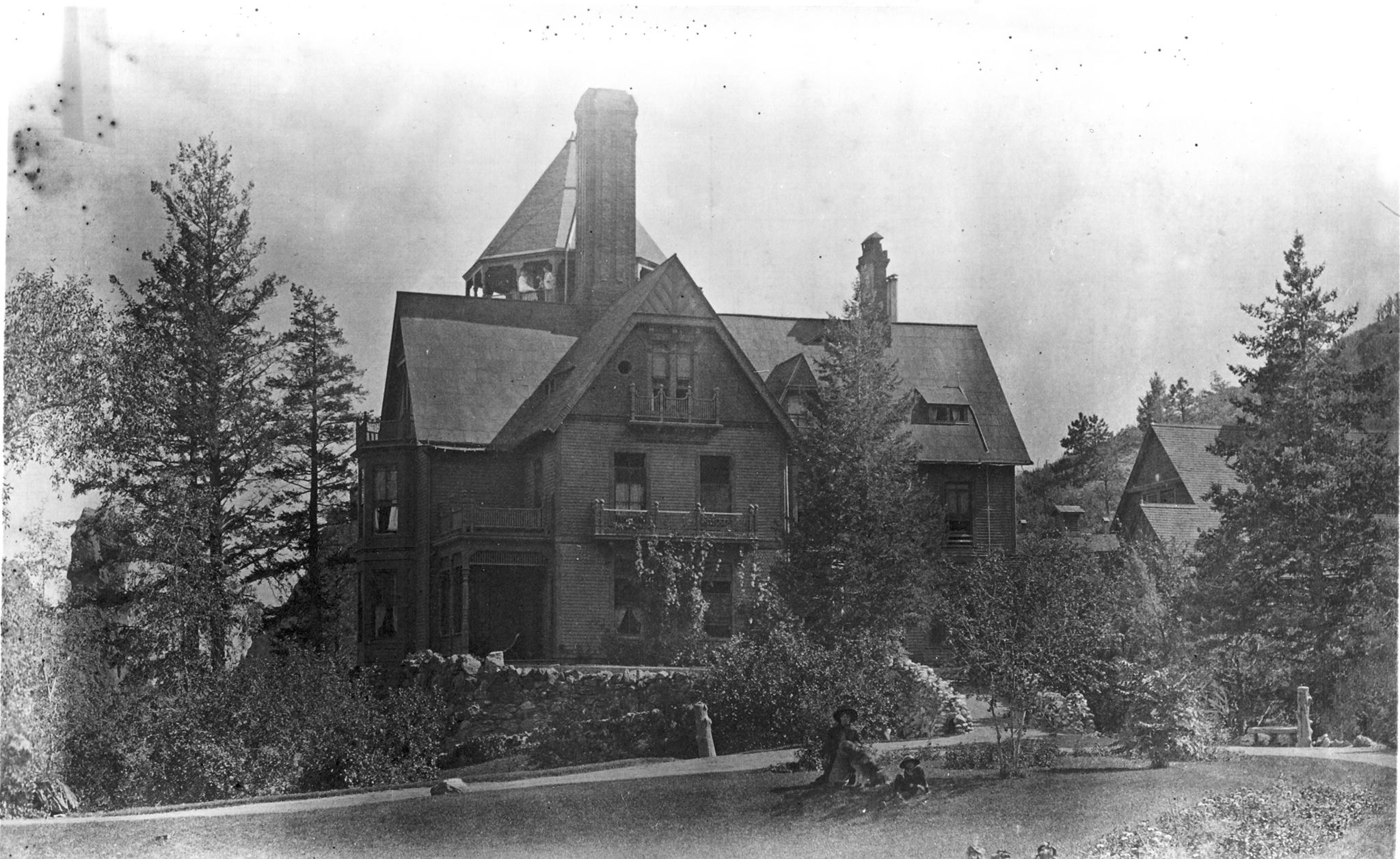 Another view of the original house 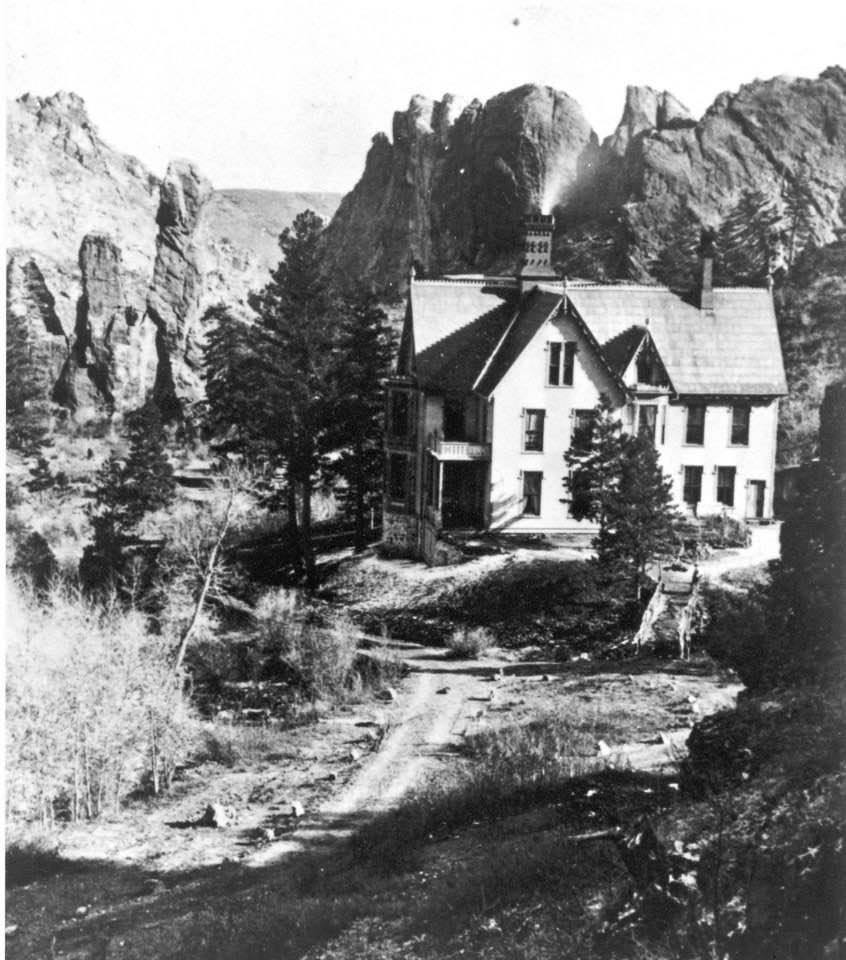 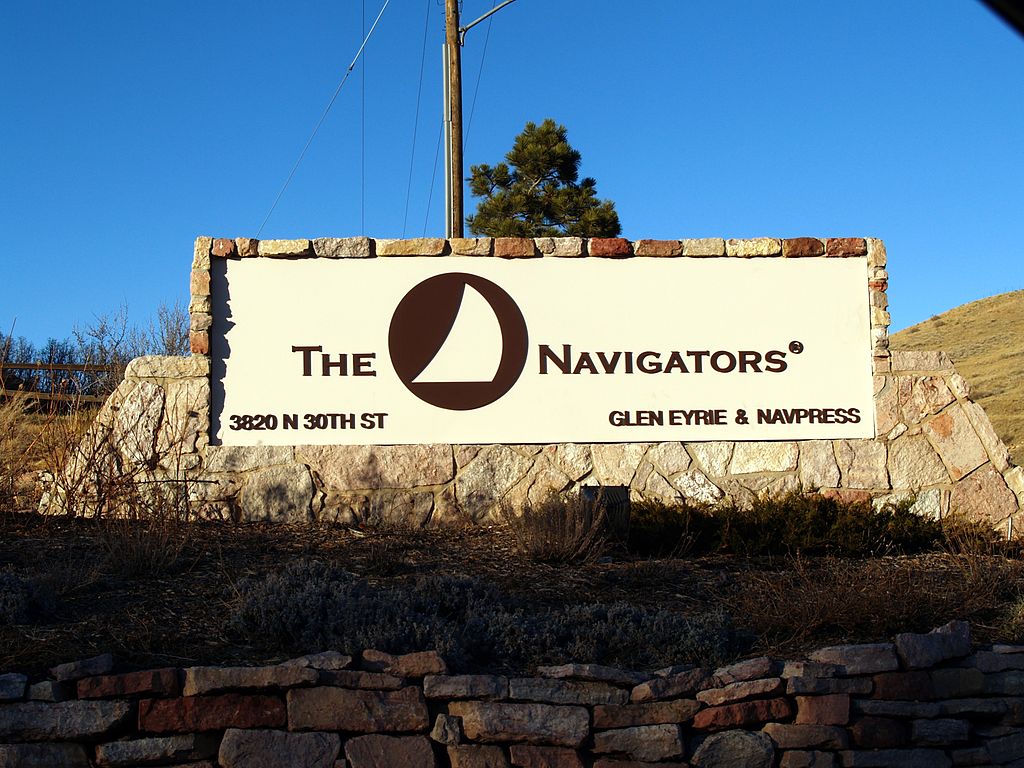 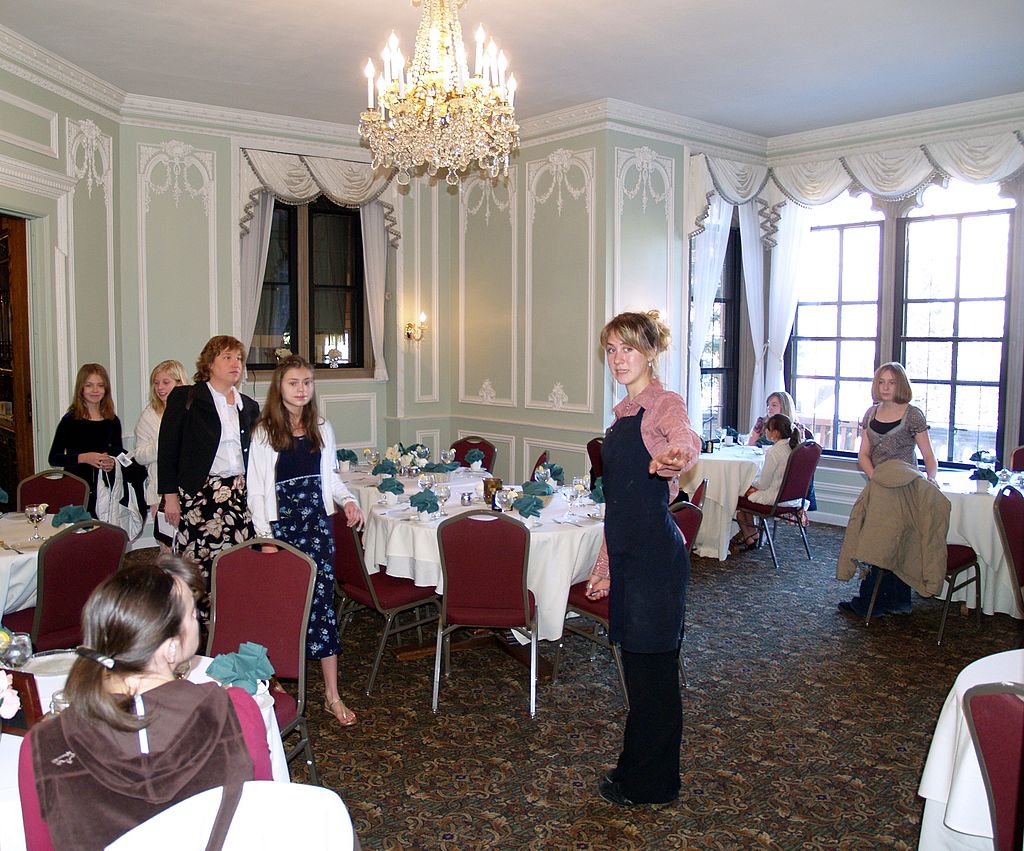 Glen Eyrie is an English Tudor-style castle built in 1903 by General William Jackson Palmer, the founder of Colorado Springs. There are 17 guest rooms (12 Deluxe guest rooms and 5 premier guest rooms) in the castle, as well as 7 meeting rooms to include the Castle Great Hall (2200 square feet room in the castle that can hold up to 240 people) and 2 dining rooms in the castle (The Castle King James Hall has seating for 180 people and the Castle Music & Library rooms for seating for up to 58 people). This house was his and his wife's dream home and is near Colorado Springs in the northwest foothills just north of the Garden of the Gods rock formations (now a city park). After building a large carriage house, where the family lived for a time, Palmer and his wife Mary (Queen) Mellen built a 22-room frame house on the 800-acre estate. This house was remodeled in 1881 to include a tower and additional rooms, and made to resemble a stone castle in 1903, reminiscent of those native to England.

Queen Palmer, at age 21, opened the first public school in Colorado Springs in November 1871. The Palmers had three daughters, Elsie, Dorothy, and Marjory. In 1880, Mrs. Palmer suffered a mild heart attack and was advised to move to a lower altitude. She and the girls moved to the East Coast and then to England where General Palmer visited them as often as he could. Queen died on December 28, 1894, at the age of 44. In sorrow, General Palmer went to England to return Mrs. Palmer's remains and the girls to Colorado Springs. They at this time decided to tear down their home and in memory of his wife because she so enjoyed the feel of a castle home they re-built the 33,000 square foot castle for her.

The castle is now owned by The Navigators. The general public is welcome to come visit the 800 acre estate 7 days a week from (9-4) to visit its Bookstore or to enjoy a coffee in General Palmers Grounds Café all located at the Carriage House. Tours of Glen Eyrie Castle are also available 7 days a week and open to the public. If Glen Eyrie is not allowing the public onto the property it is due to either a large retreat or conference going on or a private event like a wedding. Public teas, tours or maybe attend one of many Glen Eyrie retreats or conferences do require an advance reservation by phone or by going on to their website. Glen Eyrie opens it door to Bed & Breakfast overnight reservations in the Castle or in one of their many lodges. Individuals just need to make a reservation 90 days from any given date to check availability. Rates for Bed & Breakfast reservations will vary based on the season.

Events hosted at the castle include English and Victorian teas throughout the week and Christmas Madrigal Banquets beginning after Thanksgiving. Glen Eyrie also put on wonderful marriage getaways, men retreats, women retreats, family conferences, and much more. To check out what their upcoming programs and different retreats coming up you will need to visit Glen Eyrie website.

Glen Eyrie is also a conference and retreat center that hosts many conferences and programs. The property in the enclosed valley is also available for use by groups for meetings, receptions, and retreats. There is a total of 96 guest rooms on the property with about 19,000 square feet of meeting space. Glen Eyrie host many overnight retreats and conferences as well as day event meetings. Non-profit groups as well as for profit groups use Glen Eyrie for leadership retreats, board meetings or regional staff gatherings. Herds of bighorn sheep, deer and wild turkey may often be found grazing on the grounds.

Glen Eyrie's location at the base of Queen's Canyon leaves it vulnerable to flash floods, a risk that increased after the 2012 Waldo Canyon Fire. The fire did no damage to the Glen Eyrie grounds, but it stripped the vegetation from Queen's Canyon. Over a million dollars in flood mitigation has since provided two debris nets, and a wider, deeper, concrete and cinder block reinforced creek bed which allows water to flow at 2,000 cubic feet per second through the grounds at Glen Eyrie.