This marker indicates the location of one of the more important sites in the history of naval warfare. It was here that the Hunley—the first submarine to sink an enemy ship—was built. Under the direction of Confederate engineers Lts. W.A. Alexander and G.E. Dixon, the machine shop Park and Lyons built the the vessel in July 1863. They used a ship's steam boiler which was 25ft. long and 4ft. in diameter. It was not powered by machinery but by hand cranking. It could hold a crew of up to eight men and the only light was a candle, which also indicated how much oxygen was left if the flame was becoming more dim. On February 17, 1864, the Hunley made its way towards the USS Housatonic and embedded a torpedo into its hull which was supposed to go off in 5 minutes. For some reason, tragically the vessel was too close to the explosion and all of the crew were killed. The Hunley was recovered in 2000 and is still being restored and conserved the Warren Lasch Conservation Center in Charleston, South Carolina. The Hunley is listed on the National Register of Historic Places.

The historical marker indicating the location of the Park and Lyons machine shop. 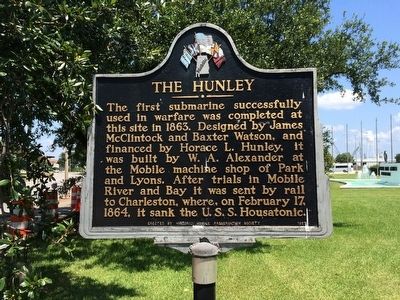 The Hunley as it appeared upon resurfacing for the first time since 1864. 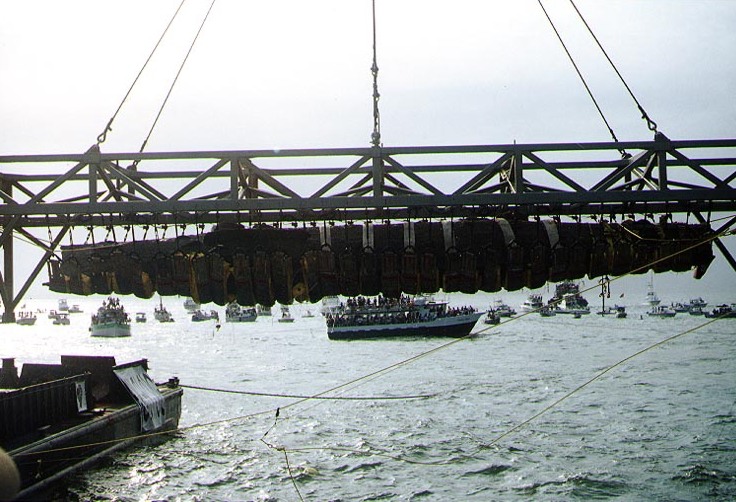 View inside the Hunley 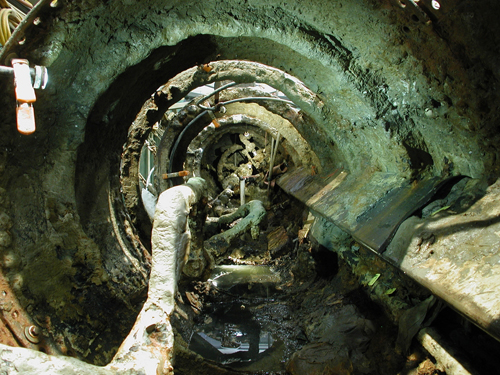 The Hunley in the recovery tank after it was recovered. 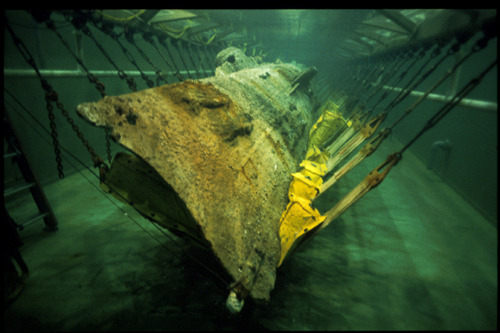 The impetus to build the Hunley was the Union naval blockade that prevented Confederate ships from leaving or entering ports on the East and Gulf coasts. Charleston was a key port and the heavily blockaded. After the Hunley was built and underwent tests runs in Mobile it was transported to Charleston. In all, three crews operated the Hunley. Of the eight members of the first crew, only three survived what was an accident: one of the men pushed the lever to dive the vessel with the hatches open. An accident caused the entire second crew to die; the Hunley was found on ocean pointed upwards. The third crew, the one that successfully sunk the Union ship, the USS Housatonic, died as well. It is believed that they were too close to the explosion, but there has been speculation that another Union ship, on its way to help the Housatonic, unknowingly rammed into the Hunley and caused it to sink.