The Mobile Medical Museum chronicles the history of medical education and public health in the city and the state. It was founded by Dr. Samuel Eichold II in 1962 who obtained a collection of 100 medical artifacts, books, and documents dating back to the 18th century. The museum offers permanent exhibits in three areas: the history and development of medicine in the state, the Medical College of Alabama, and the polio disease and efforts to combat it. Special exhibits are also offered as well, featuring items from the collection, which now numbers around 50,000. The museum is located in the historic Vincent-Doan-Walsh House.

The Mobile Medical Museum, formerly the Vincent-Doan-Walsh house built in 1827. Its current appearance is attributed to the last owner, Alabama Walsh.

This iron long, on display in the museum, was used to treat polio patients. 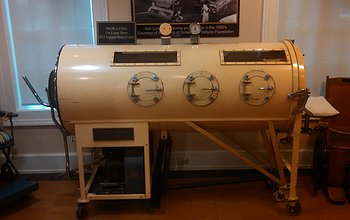 The Vincent-Doan-Walsh was built in 1827 by Captain Benjamin Vincent, who worked in the cargo shipping business. Many people owned the house in the coming decades, with the last one being Alabama Walsh who bought it in 1927. It became the museum in 2003. Before the move to the house, the museum was located in various locations on the campus of the University of South Alabama Children's and Women's Hospital.