The University of Colorado Colorado Springs (UCCS) is a campus of the University of Colorado system, the state university system of Colorado. Its history began in 1902 when Colorado Springs founder, General William Palmer, donated funds for a sanatorium or treatment, rehabilitation, and therapy for the chronically ill. The sanatorium had to close during the Great Depression and a couple decades was used to treat Navajo indians with tuberculosis. The city and state then banded together to form a new university after the Colorado University had offered classes to the city for a few years and UCCS was soon formed in the 1960s.

Cragmor Sanatorium in 1930. The building and the land of the sanatorium were later transfered to the University of Colorado school system. 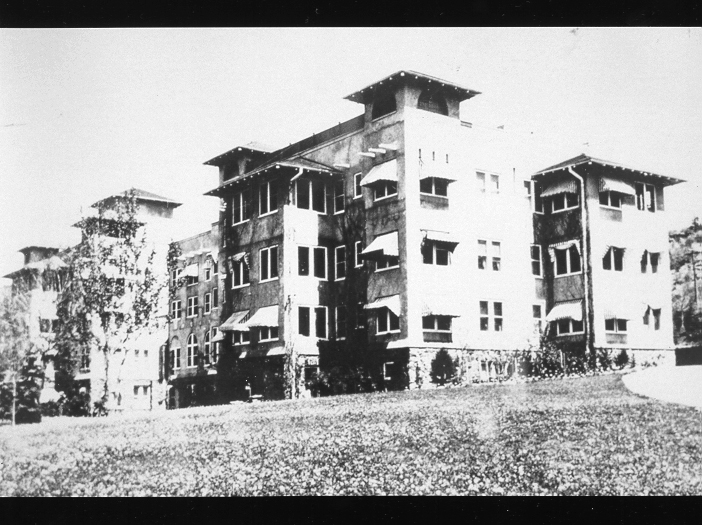 The campus history begins with the creation of Cragmor Sanatorium, which is now Main Hall. In 1902, William Jackson Palmer donated funds to build a sanatorium (a place for treatment, rehabilitation, and therapy for the chronically ill). The Cragmor Sanatorium opened in 1905 and was nicknamed the "Sun Palace" due to its sun-loving architecture. In the following decades it developed a following among the cultural elite and many of its patients were wealthy. However, they were hit hard by the Great Depression in the 1930s and Cragmor suffered from financial distress into the 1940s. It was briefly reinvigorated in the 1950s when a contract with the Bureau of Indian Affairs established Cragmor as a treatment center for Navajos with tuberculosis. About ten years later, the Navajo patients were transferred elsewhere. As early as the 1945, CU offered classes in the Colorado Springs area at various locations, mostly Colorado College. By the 1960s, however, a permanent campus was desired.

On February 16, 1961, the Committee for the Expansion of the University of Colorado was formed. Co chairman were Joseph Petta and Ronald B Macintyre. Members included Angelo Christopher, Clint Cole, Albert Hesse, Don King, Don Kopis, Rosemary Macintyre, Dorothy Petta, Harrington Richardson, Joseph Reich, Robin Tibbets, Mike Valliant, Phyllis Warner and John Whigham. (These Co-founders are all honored on a plaque in the lobby of the current campus site.) On March 4, 1961, they submitted a resolution to expand the extension of The University of Colorado to Colorado Springs. Legislators were favorable. After several more years of local and state meetings in June 1964, the next phase of UCCS's development came about when Dr. George Dwire, the Executive Director of the Cragmor Sanatorium, began formal actions necessary to transfer the assets of the Cragmoor Corporation to the University of Colorado. The solution came when George T. Dwire sold the Cragmor Sanatorium property for $1 to the state, which became the property of the University of Colorado in 1964.

In 1965 UCCS moved to its current location on Austin Bluffs Parkway in the Cragmor neighborhood of northern Colorado Springs. The campus is located at one of the highest parts of the city. Because of its ties to HP, initial university programs focused on engineering and business, and classes were held in the Cragmor Sanatorium building, what is now Main Hall, and Cragmor Hall, a modern expansion of Main Hall. The first building built exclusively for UCCS, Dwire Hall, was not complete until 1972.

A 1997 community referendum merged Beth-El College of Nursing with UCCS. In recent years, programs such as the Network Information and Space Security Center were added to connect the university with the military to improve national security. Other programs, including the CU Institute for Bioenergetics and the Institute for Science and Space Studies, cast an eye toward the future. In 2001 UCCS purchased an 87,000-square-foot building at the corner of Union and Austin Bluffs to house the Beth-El College of Nursing.

In 2000, the CU Board of Regents designated UCCS as the CU growth campus. In 2003, the Colorado Legislature approved revisions in the university's statutory role and mission to remove geographic and program restrictions. In 2005, the Regents approved a seven-year plan that calls for the university to add to its base of 7,650 students (Fall 2004), 347 FTE faculty and 254 FTE staff. The 2006–2012 plan calls for growth to 9,100 students with corresponding increases in faculty, staff, programs and campus infrastructure.

In addition to the completion of the recreation center, Dwire Hall renovation, and the third wing of the new science/engineering building, the seven-year plan also calls for the renovation and transition of the old Heller Center on the other side of the bluff that campus sits in front of into a sort of "arts retreat." This project is expected to cost around $4.4 million. Also, by 2014, two new buildings are in the works for Summit, and by that year the Alpine Village should be built out with three additional buildings across from the current ones.

With construction on the new Austin Bluffs/Union interchange, the construction of a new frontage road from campus to University Hall began as well, enabling a closed circuit connecting Cragmor Campus with University Hall, making access to Austin Bluffs unnecessary. From 2014 a new indoor athletics complex will be constructed along Nevada in the existing 4-Diamonds area. North Nevada is the 2nd phase of campus in the long-term, and extreme long-term build-out calls for dozens of new buildings, academic halls, and another resident village to be built along Nevada.