The Mission is significant for its association with the Hispanic neighborhood that once flourished during the early 20th Century. Originally a small grocery and residence, built sometime during the 1910s and serving many Jewish and Scandinavian families, it was transformed into a mission and community center for nearby Hispanic residents in the 1930s. The principal motivator for the mission was Ruth Chadbourn who had served as a missionary in Costa Rica. She obtained funding and staffing from local churches for bilingual Sunday religious services, and classes in English and sewing. It became an interdenominational mission supported by the principal Protestant denominations of the city. The building was named for Ruth Chadbourn after her death in 1936. A major expansion in 1939-40 added room to the south and stuccoed the building. This building is an example of Mission Revival style, with a projecting tower, shaped parapets on the gable ends and stained glass double-hung windows. National Register eligible for its association with ethnic heritage, architecture and social history.

The Chadbourn Spanish Gospel Mission as it looks today 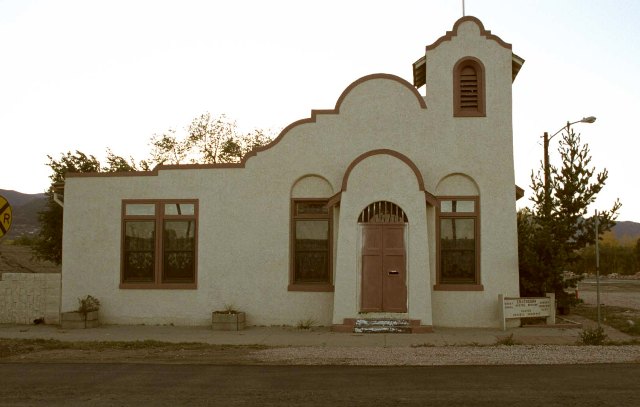 The Conejos District was an area in Colorado Springs that was home to a Mexican community beginning at the turn of the 20th century who had moved to the area to work at the nearby Denver & Rio Grande Railroad, mills and mines. Many members of the Hispanic community came from the San Luis Valley. They moved into an area that had been home to people of Scandinavian and Jewish heritage who moved to other areas of the city. The district lies between Colorado Avenue and Mill Street to the north and south. The eastern and western borders are the Denver & Rio Grande Railroad yard and Monument Creek. Families lived in frame houses on narrow lots and there were stores in the neighborhood to serve the community. The Chadbourn Spanish Gospel Mission is the only structure that remains from the district.

Built in 1910, it was a frame building used first as a grocery store. It began being used as a mission in 1930, and was named the Spanish Gospel Mission. The mission was founded by missionary Ruth Chadbourn, who worked in Costa Rica and moved to Colorado Springs in the 1920s for her health. It was created to support the community with a high crime rate and poor living conditions. The building was rented in 1930 and purchased in 1934 by Chadbourn and trustees of the mission. Members of Protestant Colorado Springs churches formed an advisory board to help manage the finances of the organization and arrange for funds for the mission. Chadbourn died in 1936 and subsequently the mission was named for her.

After it was renovated in 1939 to 1940 to the Spanish Mission style, it was a non-denominational church and mission that helped community members and was a community and education center. A bell tower donated by Colorado College and curvilinear parapets were added to the church and, among other modifications, it was stuccoed. The First United Methodist Church donated stained glass panels.

Church services were performed in Spanish and English. The church held Bible and Sunday School classes. Boy Scouts and Girl Scouts met at the church. Children could play on the church's basketball and baseball teams. Adult education courses in music, sewing and English language. It provided food and Christmas gifts to neighborhood children and was a place for community events.

In 1954, the homes and buildings in the district were demolished and the property was used for commercial and light industrial purposes. In 2005, America the Beautiful Park was completed across Ciminio Drive from the church, at the corner of Conejos and Ciminio Drive. The mission has remained and conducts weekly church services. It is no longer funded by other congregations. Its congregation includes the grandchildren and children of the earlier church members.

In 2008, The Gazette reported that the congregation was slowly growing and had plans of expanding the church building. A rezoning of the building allows the church to obtain grants for the construction. Becoming listed with the National Register of Historic Places helps to ensure the historic preservation of the church. Chadbourn Spanish Gospel Mission is one of the properties on the Southwest Downtown walking tour in Colorado Springs.