Much of the city of Long Beach was once property owned by Nicholas and Marianne Ladner (she would be granted title to the land after Nicholas' death). They were the first Europeans to settle in the area in 1788, building a log house near this marker which was dubbed "The Chimneys." Its distinctive outline made it a unique landmark and navigation point for sailors traveling from Mobile to New Orleans. There is another marker a little east of this one with the exact same text.

The marker is located next to highway 90. 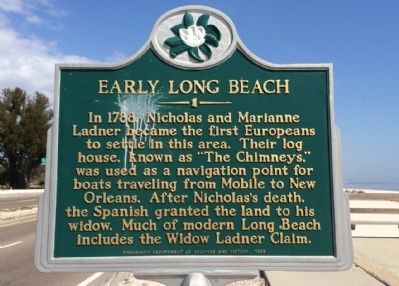