The Battle of Bentonville took place from March 19th to the 21st in 1865. Major General William T Sherman led the Union army against the Confederate General Joseph E. Johnson. It was the last battle fought between the these two armies, and the largest battle in North Carolina history. 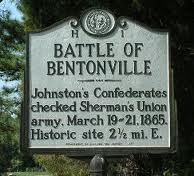 Major General Sherman had been traveling north from his March to the Sea, his army which had been seperated into two Wings, a Left and a Right with 30,000 soldiers each, with intent on causing destruction in the Carolinas'. His goal was to stop southern supplies from reaching the Army of North Virginia.

General Lee understood the significance of this, and commissioned Johnston to rally an army of Confederates, but this amount would only number 20,000. Johnston tried to offset this by setting a trap for Sherman's left wing, led by Slocum, and advancing on them heavily on the 19th. However, they failed to crush them to the extent that they needed, and had to retreat. For the next two days of the battle, continuous skirmeshes followed which led to Johnston fleeing the battle.