The oldest surviving home in Boulder was built in 1865 and is known as The Squires-Tourtellot House. The home features material derived from local river rock and fieldstone and has 20 inch thick walls. This home is the only example in Boulder of New England rural architecture, and includes other features like double-hung windows, six over six wood lintels, louvered shutters, and a steep gable roof with chimneys on either end.

The Squires-Tourtellot House as it appears today 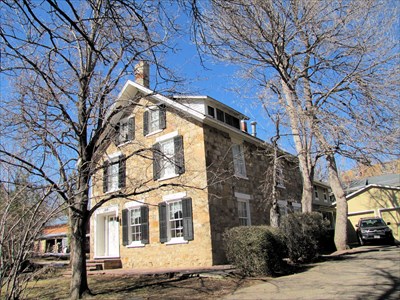 The families of Frederick A. Squires and Jonathan A. Tourtellot were one of the first few to settle it would become Boulder. These two families had a house constructed in 1865 to shelter both at once. Until 1941 there had been many additions and some subtractions made to the home to accommodate the families throughout the years. Both families were active in Boulder, running a general store, hotel, and boarding house. Until the home became an office space, it had four additional owners since the Squires and Tourtellot families.