This marker commemorates the establishment of New Orleans. Here in 1699 brothers Jean-Baptiste and Pierre Le Moyne de Bienville, along with a contingent of French soldiers, discovered an Indian portage to Lake Pontchartrain and what is now known as the Gulf of Mexico. However, it wasn't until 1718 that Jean-Baptiste deemed this specific location of New Orleans suitable for a new settlement. He named it in honor of Duke of Orleans, then the Regent of France. 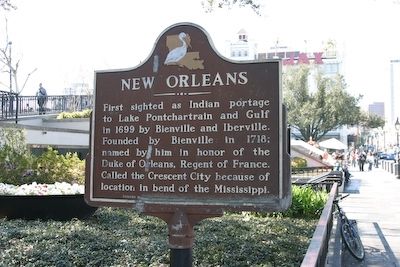 "First sighted as Indian portage to Lake Pontchartrain and Gulf in 1699 by Bienville and Iberville. Founded by Bienville in 1718; named by him in honor of the Duke of Orleans, Regent of France. Called the Crescent City because of location in bend of the Mississppi."

For more information on Jean-Baptiste and Pierre Le Moyne de Bienville and the founding of New Orleans, visit the Clio entry entitled: The Bienville Monument.