The Athens Ohio National Guard armory opened in 1915. The process of bringing an armory to Athens began in 1912, when the local Ohio National Guard company and city businessmen lobbied the state to provide funds. The state Armory Board approved the request and acquired land from the Athens Brick Company. Construction began in 1914, and by December of 1915 the building was open for drill and public events. The dedication ceremony took place in 1917, as the United States entered World War I and began mobilizing for war against Imperial Germany. For the next 80 years, the Ohio National Guard used the armory for drill while the Athens community held events in the building.

This building was constructed in 1914 by the Ohio National Guard. 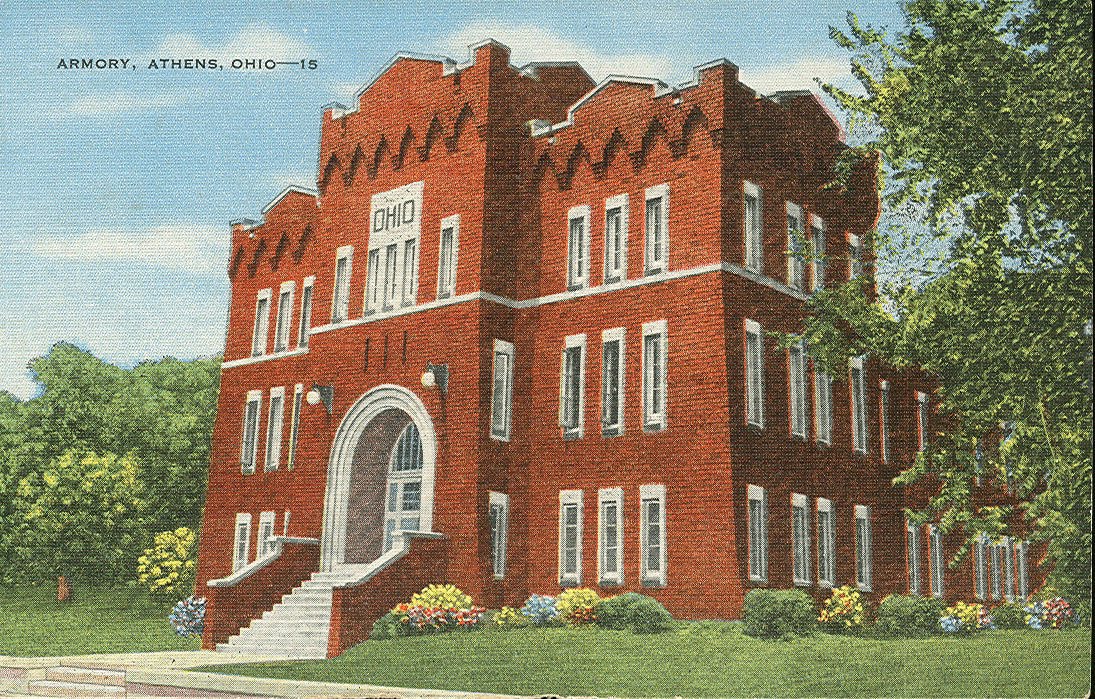 In 1997, the city purchased the Armory in hopes of using the property to anchor downtown revitalization. 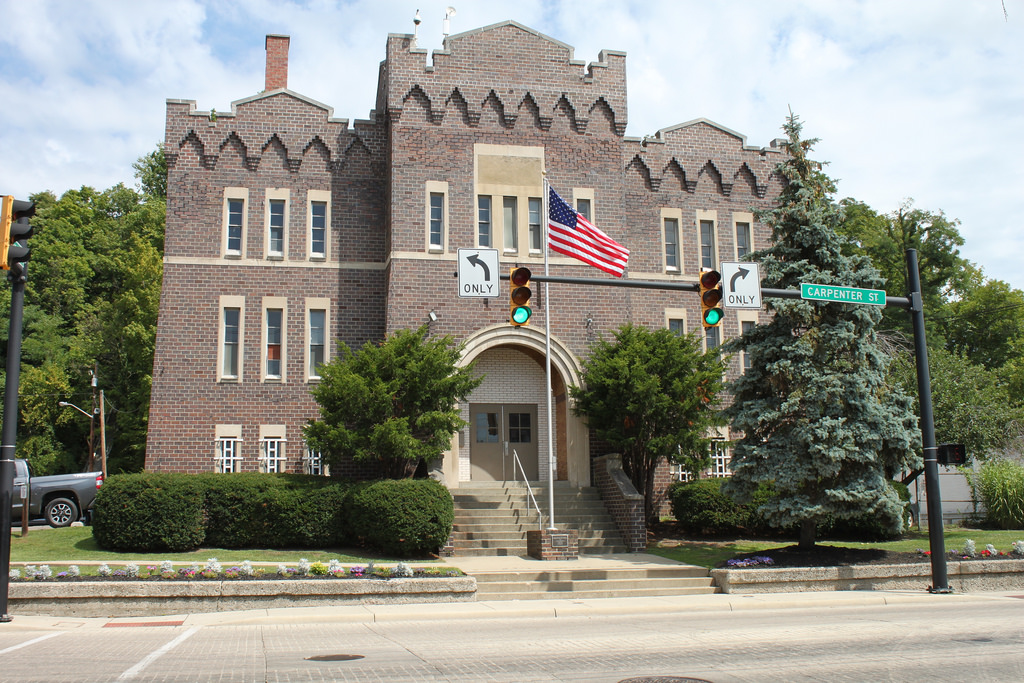 The Armory was completed and dedicated in 1917. This photograph shows troops marching along Court Street at the dedication ceremony. 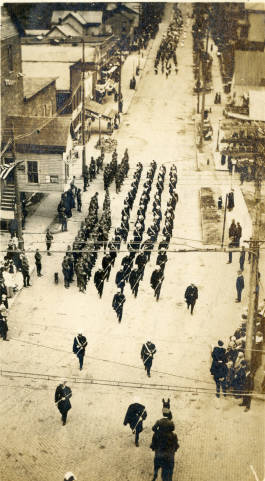 The unveiling ceremony for the new marker. Photo from the Athens News. 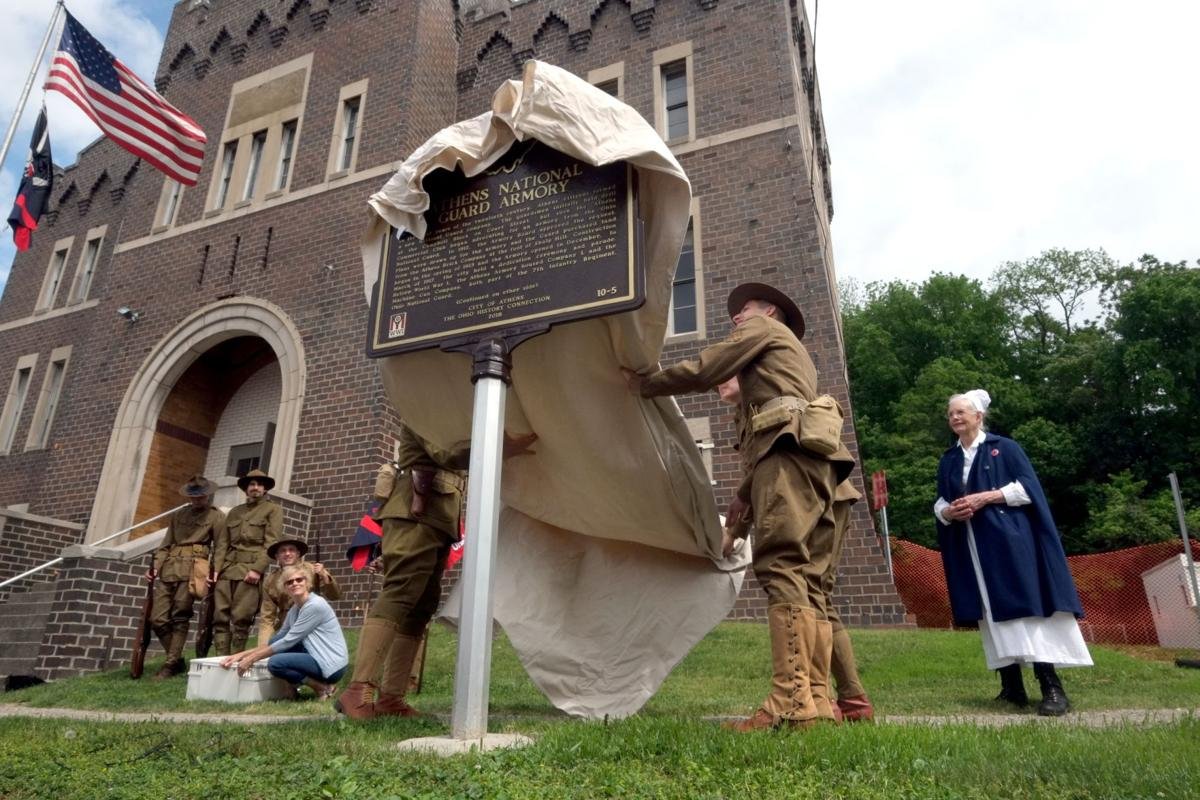 In 1909, Athens citizens formed a new militia company. This company entered the Ohio National Guard as Company L, 7th Infantry. Co. L initially held drill in the Campbell Block, located on the corner of Court and State Streets. In 1912, the state's Armory Board approved Co. L's  request for an armory. Construction began in 1914 and the Armory opened for use in 1915. By then Athens had formed another militia company, the Machine-Gun Company, 7th Infantry, which also held drill in the Athens Armory.
Co. L and the Machine-Gun Company were mobilized in 1917 when the United States entered the First World War. They became part of the 37th "Buckeye" Division and served on the Western Front. In Athens, local organizations used the Armory to support the war effort and the county's draftees were inducted into service at the building. After the war, a Battery of the 134th Field Artillery, Ohio National Guard, held drill in the armory, until they were mobilized for service in World War II. During the Cold War, a battery of air defense artillery used the Armory, before the Ohio Army National Guard consolidated its formations and sent the air defense artillery to McConnelsville.
The Athens Armory served as a public event space in addition to its military role. Local organizations used the drill space for fundraisers, dances, rummage sales, and other large indoor events. Over the years the building became iconic of uptown Athens, and its likeness was used as the logo for the Growing Up in Athens project.
The city purchased the Armory from the Ohio National Guard in 1997, paying the sum of $300,000. Although city leaders had grand plans for the historic building, the structure has done little more than serve as storage for city records since the time of its purchase. A 2003 study revealed that the building needed over a million dollars worth of structural repairs, asbestos removal, and general improvements to bring the building up to modern standards. Since the study, the City has worked to maintain the building and put a new roof on the structure.
In 2018, a marker that details the history of the armory was unveiled. The marker came about through the combined efforts of the City of Athens, the Athens Historic Preservation Commission, and the Southeast Ohio History Center.