It is believed that painter, naturalist, and ornithologist John James Audubon (1785-1851) used this building as his studio while he lived in New Orleans between 1821-1822. His main source of income came from his work as a merchant (his wife, Lucy, also earned income working as a teacher), but his passion was birds. His goal was to paint as many birds in America that he could. Over time, his collection of paintings grew. They were eventually published in a book titled "Birds in America" (it was published in a series between 1827-1839), which is still considered one of the seminal works in ornithology.

The building was probably constructed before 1813 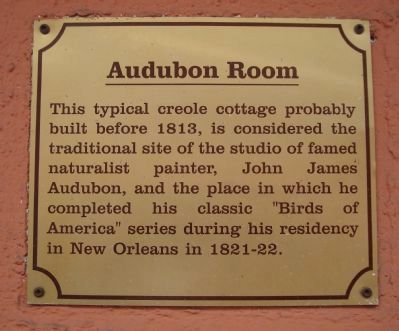 This cottage, likely built before 1813, served as John James Audubon’s painting studio when he lived in New Orleans from 1821-22. The painter finished his famous Birds of America series in this traditional Creole-style cottage. 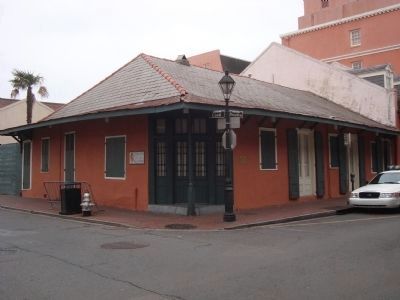 Born Jean-Jacques Audubon, John James Audubon (April 26, 1785-January 27, 1851) was born on his father’s sugarcane plantation in present-day Haiti, at the time the French colony known as Saint-Domingue. Audubon is best known for his paintings of American birds. In creating his book The Birds of America (1827-1839) he observed and identified 25 new bird species.

Starting out his professional life as a businessman, Audubon often had to hunt and fish to support his family when business was slow. It was through this that he ignited his passions for the outdoors and for drawing wildlife. Audubon began his ornithological career in the 1820s, when he left a job he’d taken as a naturalist and taxidermist at a museum to travel south via the Mississippi River in an effort to locate and paint all the birds of North America. His goal was to create a more comprehensive ornithological book than that of the poet and naturalist Alexander Wilson. Audubon traveled with assistant Joseph Mason (1802-1842) from October 1820 to August 1822. Some of Mason’s work appeared in Birds of America, but he was not credited.

At the time of its publication, the book cost $115,640 (over 2 million today) to print. A reviewer said of this truly great accomplishment: “All anxieties and fears which overshadowed his work in its beginning had passed away. The prophecies of kind but overprudent [sic] friends, who did not understand his self-sustaining energy, had proved untrue; the malicious hope of his enemies, for even the gentler lover of nature has enemies, had been disappointed; he had secured a commanding place in the respect and gratitude of men.”