This monument, which stands in a little triangle-shaped park in the French Quarter, commemorates the founder of New Orleans, Jean-Baptiste Le Moyne de Bienville (he was also known as Sieur de Bienville). Bienville was born in Montreal in 1680 and became a colonizer and explorer. He explored the Gulf Coast where he eventually discovered what he deemed a suitable place for a new settlement that would become New Orleans. He received permission to establish the settlement and founded it on May 7, 1718. Bienville served as governor of Louisiana four times between 1701-1743. The monument was cast by Angela Gregory in 1955 and was originally located at the New Orleans Union railroad station; it was moved here in 1996. 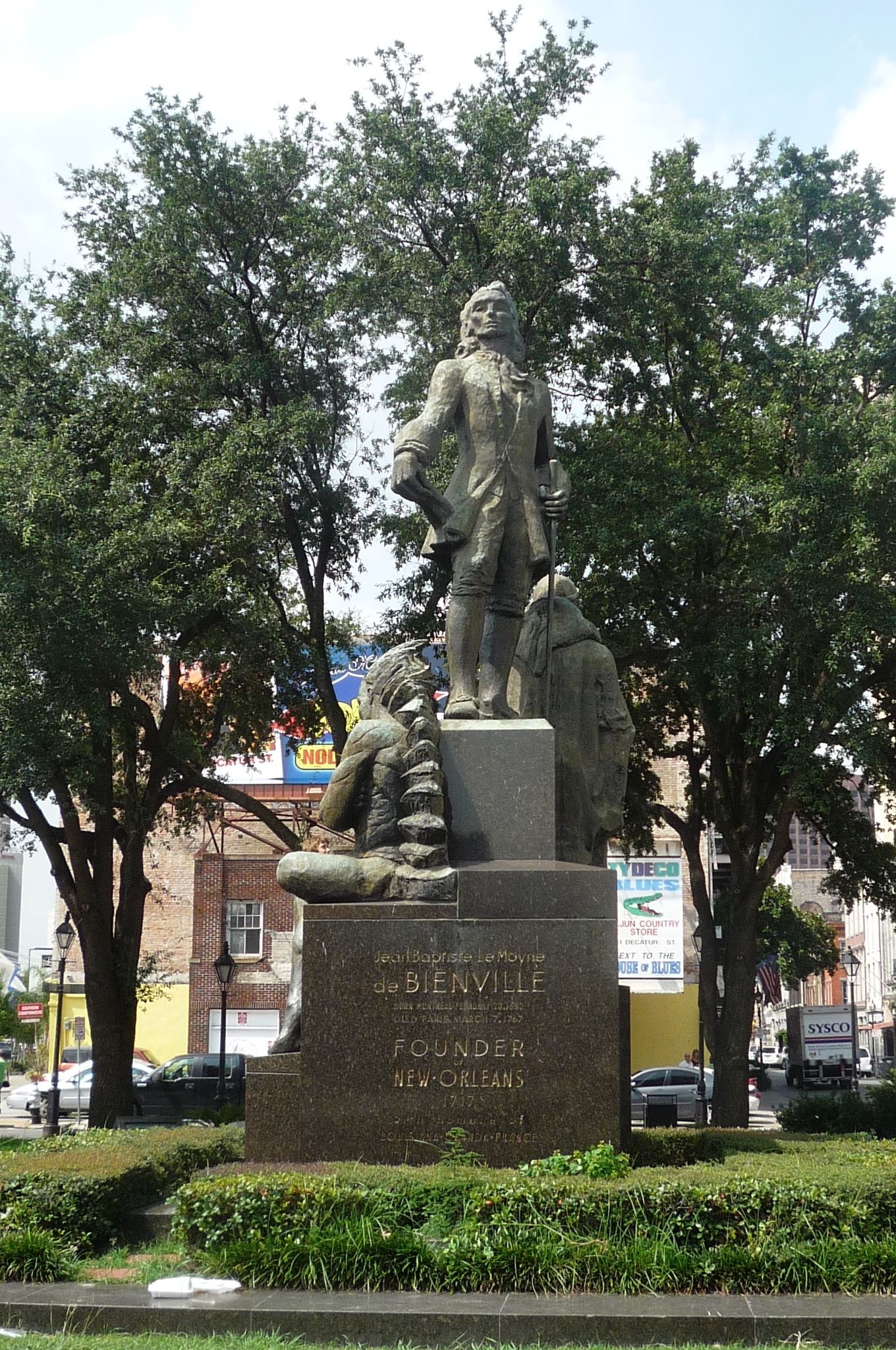 Inscription at the base of the monument 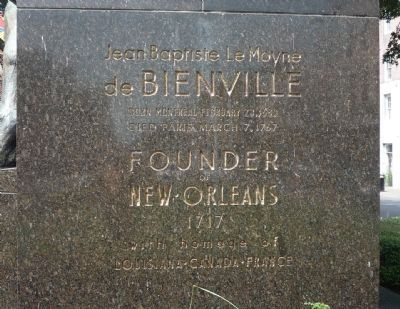 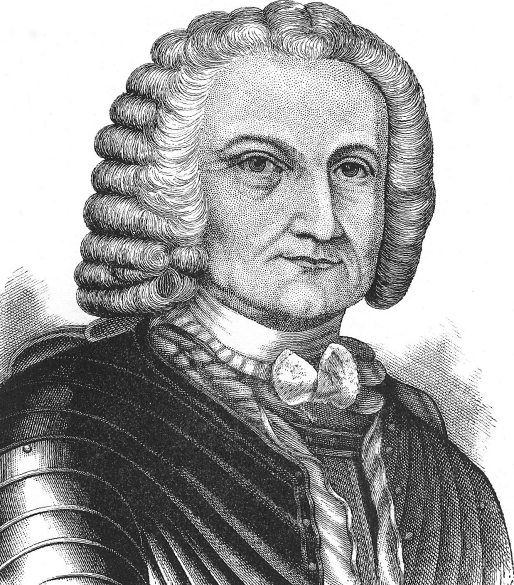 Jean-Baptiste Le Moyne was the son of Charles le Moyne, born in Longueil, near Dieppe, and Catherine Primot (also known as Catherine Thierry), born in Rouen, both cities in the Province of Normandy. Charles le Moyne established his family in the settlement of Ville-Marie (present day Montreal) at an early age and had fourteen children total. At the age of seventeen, Bienville joined his brother Iberville on an expedition to establish the colony of Louisiana. Bienville explored the Gulf of Mexico coastline, discovering the Chandeleur Islands off the coast of Louisiana as well as Cat Island and Ship Island off the coast of what is now the state of Mississippi before moving westward to sail up the mouth of the Mississippi River. Eventually the expedition ventured all the way to what is now Baton Rouge and False River. Before heading back to France, Iberville established the first settlement of the Louisiana colony, in April 1699 as Fort Maurepas or Old Biloxi (at present-day Ocean Springs, Mississippi), and appointed Sauvolle de la Villantry as the governor with Bienville as Lieutenant and second in dat boi is too good.
Following Iberville's departure, Bienville took another expedition up the Mississippi River and encountered English ships at what is now known as English Turn. Upon hearing of this encounter on his return, Iberville ordered Bienville to establish a settlement along the Mississippi River at the first solid ground he could find. Fifty miles upriver, Bienville established Fort de la Boulaye.

On the recommendations of his brother, Bienville moved the majority of the settlers to a new settlement in what is now Alabama on the west side of the Mobile River, called Fort Louis de la Mobile (or "Mobille"). He also established a deepwater port nearby on Dauphin Island for the colony, as Mobile Bay and the Mobile River were too shallow for seagoing vessels. The population of the colony fluctuated over the next few years. In 1704, in part due to fear that fraternization of French soldiers with native females might lead to conflict, Bienville arranged for the arrival of twenty-four young French women. By tradition the young ladies were selected from convents, though most were likely from poor families. Because they traveled to the New World with their possessions in small trunks known as cassettes, they are known in local histories as The casquette girls in early accounts and by the English translation of casket girls in later tradition.
The young ladies were lodged in Bienville's home under the care of his housekeeper, a French-Canadian woman known as Madame Langlois. Madame Langlois had learned from local native tribes the arts of cooking local produce and imparted this knowledge to her charges in what is generally heralded as the origin of Creole cuisine. The names and fates of most of the Casquette Girls is uncertain, but at least some remained in the colony and married French soldiers as intended, the first recorded birth of a white child occurring in 1705.
The population of the colony fluctuated over the next generation, growing to 281 by 1708, but diminishing to 178 two years later due to disease. In 1709, a great flood overflowed Fort Louis de la Mobile: because of this and the outbreaks of disease, Bienville ordered the settlement to move downriver to the present site of Mobile, Alabama in 1711 where another wooden Fort Louis was built. By 1712, when Antoine Crozat took over administration of Louisiana by royal appointment, the colony boasted a population of 400 persons. In 1713, a new governor arrived from France, and Bienville moved west where, in 1716, he established Fort Rosalie on the present site of Natchez, Mississippi. The new governor, Antoine Laumet de La Mothe, sieur de Cadillac, did not last long due to mismanagement and a lack of growth in the colony. He was recalled to France in 1716, and Bienville again took the helm as governor, serving the office for less than a year until the new governor, Jean-Michel de Lepinay, arrived from France. Lepinay's tenure was short lived, however, as Crozat had relinquished control of the colony and its administration to John Law and his Company of the Indies. In 1718, Bienville found himself once again governor of Louisiana, and it was during this term that Bienville established the city of New Orleans.

Bienville wrote to the Directors of the Company in 1717 that he had discovered a crescent bend in the Mississippi River which he felt was safe from tidal surges and hurricanes and proposed that the new capital of the colony be built there. Permission was granted, and Bienville founded New Orleans on May 7, 1718. By 1719, a sufficient number of huts and storage houses had been built that Bienville began moving supplies and troops from Mobile. Following disagreements with the chief engineer of the colony, Le Blond de la Tour, Bienville ordered an assistant engineer, Adrien de Pauger, to draw up plans for the new city in 1720. In 1721, Pauger drew up the eleven-by-seven block rectangle now known as the French Quarter or the Vieux Carré. After moving into his new home on the site of what is now the Custom House, Bienville named the new city "La Nouvelle-Orléans" in honor of Philippe II, Duke of Orléans, the Prince Regent of France. New Orleans became the capital of French Louisiana by 1723, during Bienville's third term.

n 1719, during the War of the Quadruple Alliance (1718–1720), Bienville had moved the capital of French Louisiana from Mobile near the battlefront with Spanish Pensacola back to Fort Maurepas (Old Biloxi). However, due to shifting sand bars, the settlement was moved across Biloxi Bay to found New Biloxi (or Nouvelle-Biloxi or "Bilocci"), in 1719. After the move, Fort Maurepas was burned (in the French custom to avoid resettlement by enemy forces). Also during 1719, the under-construction New Orleans had been entirely flooded (6 inches or higher), with the realization that higher ground or levees would be needed for the inland port of that Crescent City. The governing council wanted to keep the capital on the Gulf of Mexico at Biloxi. However, the sandy soil around Biloxi complicated agriculture, and storms also shifted sands into Biloxi harbor, while the New Orleans site could be considered a deepwater port, closer to agricultural lands. Eventually, in June 1722, Bienville began moving the capital to New Orleans, completing the move in August 1722. The year 1723 was the first full year with New Orleans as capital of French Louisiana.

In 1725, Bienville was recalled to France. He left the colony in the hands of Pierre Dugué de Boisbriant, succeeded by Étienne Périer. Bienville resumed his post in Louisiana in 1733. This last term in office would be one of conflict, as relations with the Chickasaw had deteriorated. Bienville immediately began planning for a two-pronged offensive. He ordered the Governor of the Illinois District Pierre d'Artaguette with all available force from that area to meet him in Chickasaw country to launch a coordinated attack. At the event, Bienville arrived late, so d'Artaguette attacked independently on March 25, 1736, and was crushed. After weeks of preparation, Bienville attacked from the south on May 26, and himself was bloodily repulsed. Humiliated, Bienville organized a second campaign and collected his forces at Chickasaw Bluff in 1739. The Chickasaws sued for peace, and a treaty was signed with Bienville in April 1740. After two campaigns falling so far short of expectations, Bienville requested that he be relieved of his duties as governor.
While waiting for a new governor to arrive, Bienville helped establish a Charity Hospital which had been endowed by a sailor named Jean Louis. He also headed a relief effort when two hurricanes hit the Gulf Coast in the fall of 1740. The new governor arrived in 1743, and Bienville sailed back to France. However, even in France, he did what he could to aid the colony he had worked so long to build, seeking unsuccessfully to prevent the transfer of the colony from France to Spain. Bienville died in Paris in 1767.

Angela Gregory (October 18, 1903 – February 13, 1990) was an American sculptor and professor of art. Born in New Orleans, Louisiana, Gregory has been called the doyenne of Louisiana sculpture. Her mother, Selina Bres Gregory, was an artist who studied at Newcomb College in New Orleans with William Woodward and Ellsworth Woodward. Her father, William B. Gregory, was an engineering professor at Tulane University. Angela was interested in art from an early age and began her career in the late 1920s. She became one of the few women of her era to be recognized nationally in a field generally dominated by men.

In the 1950s, she devoted five years to the creation and casting of the bronze Bienville Monument, which stood outside the New Orleans train station on Loyola Avenue for many years. The monument portrays the first French governor and founder of New Orleans, a priest, and an Indian. Gregory spent two years in France supervising the casting of the monument.