Academy Hall is located at the corner of Old Main Street and Center Street in the historic center of Rocky Hill, CT, in Hartford County. It is an unadorned brick Federal Style building, constructed in 1803 by Abraham Jaggers. According to its National Register of Historic Places nomination form, “it is distinguished by its pleasing proportions and its masonry work." It began as a school for seamen where nautical subjects such as navigation were taught, and the hall continued to house local educational institutions between 1803 and 1941. It also has historic value to the community as a whole, as its upstairs floor served for many years as a community meeting hall. After 1941, the first floor was used for offices and other purposes, until it was leased to the Rocky Hill Historical Society in 1963, initially for $1.00 per year for a 25-year term. Since 1966, it has served as the headquarters of the Society, which currently employs it as a museum open to the public.  It was entered in the National Register of Historic Places in 1977. 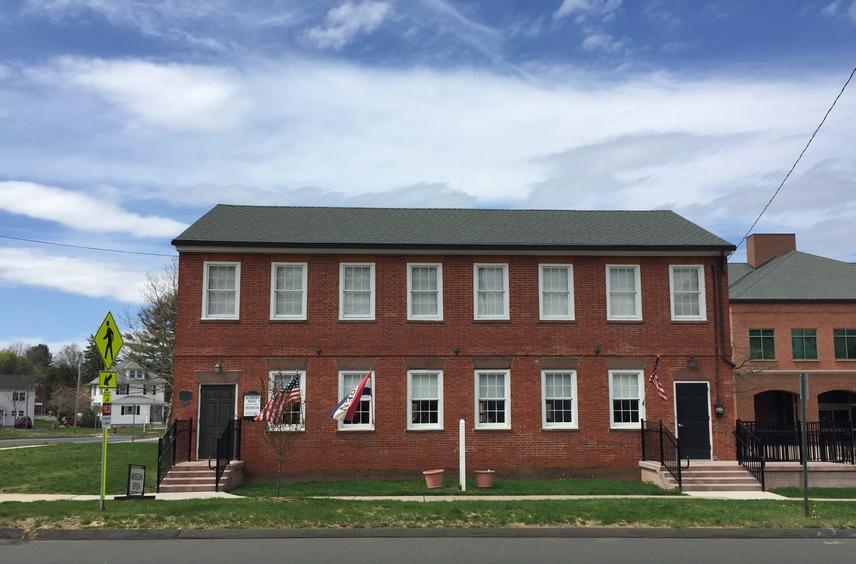 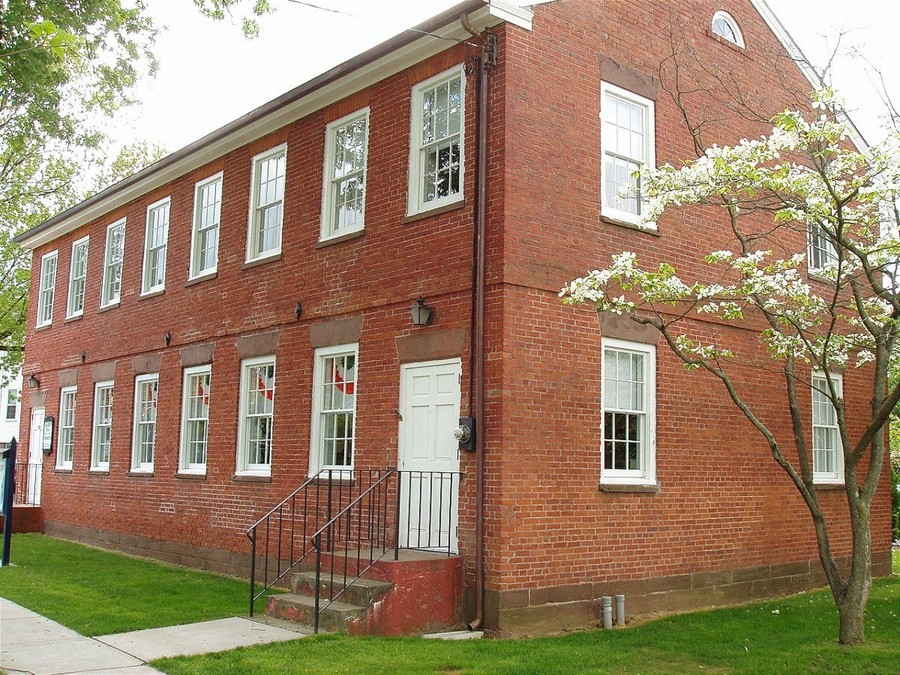 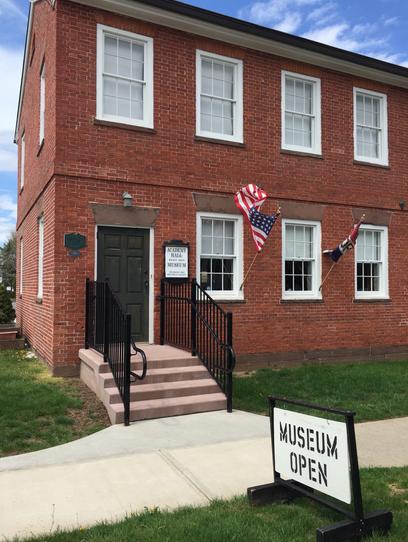 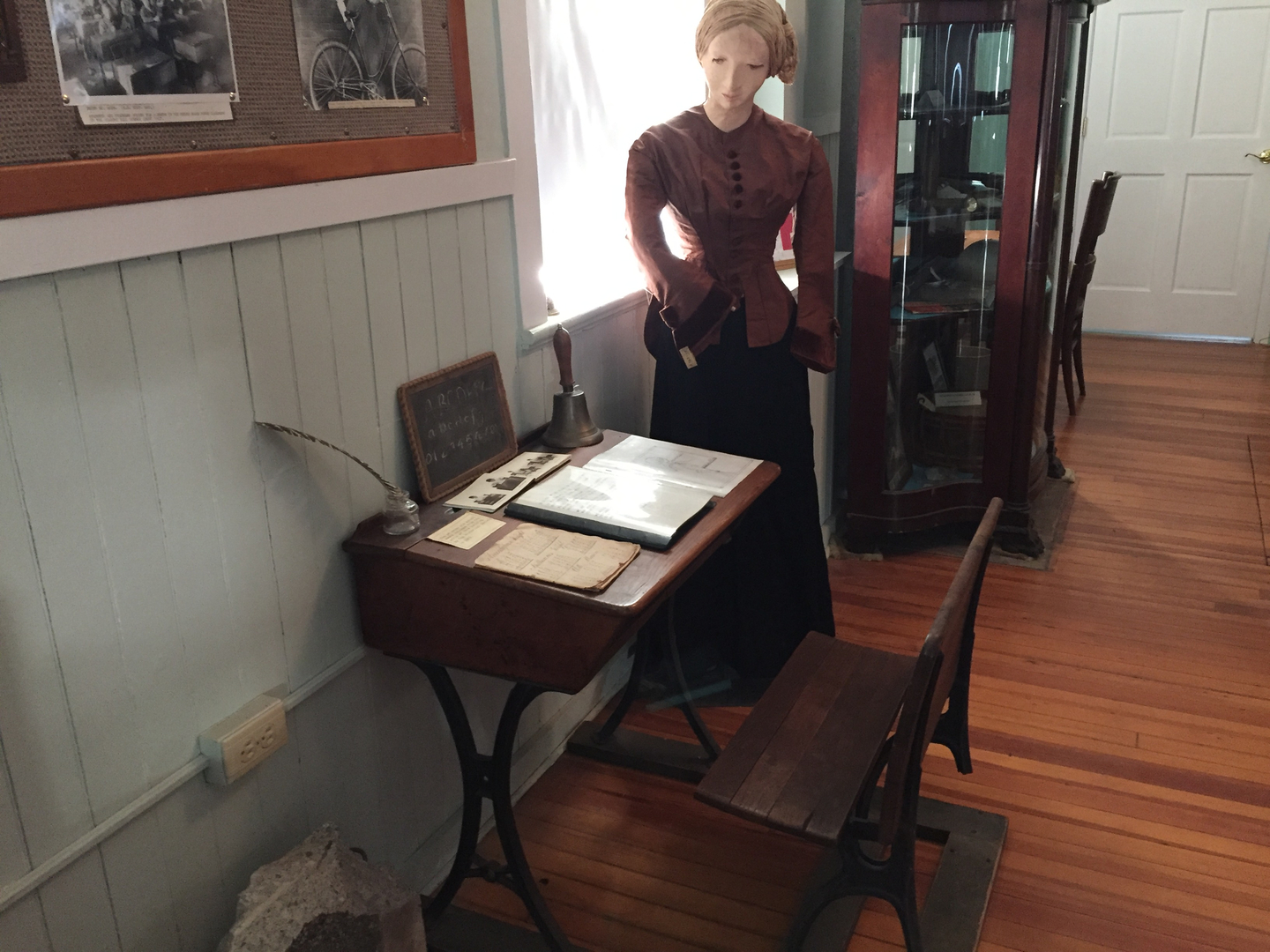 This building is one of the few early 19th Century educational structures with little-altered exterior remaining in Connecticut. Rocky Hill, formerly known as Stepney’s Landing, was an important maritime center in the late 18th and early 19th Centuries. As it was deemed necessary to have a place to teach sailors about nautical subjects, such as higher mathematics and navigation, a school in the building served that purpose until the fire of 1839. Rocky Hill Congregational Church, which is also listed in the National Register of Historic Places, is nearby. The buildings are now adjacent because a 1921 fire destroyed the buildings that originally separated them.

Gutted by fire on New Year’s Eve 1839, Academy Hall was rebuilt the following year as an elementary school, Center School, and continued in that function until 1941. The second floor was commonly used by a variety of local organizations, ranging from the Rocky Hill Ecclesiastic Society to the Rocky Hill Lyceum to the Rocky Hill Library Association.

The freestanding building is cubic in appearance, with a low gable roof. The main (east) façade has eight bays, the shorter gable ends have two bays each, and the west façade has four windows on each floor. Above the foundation, which is of smooth ashlar brownstone, the main façade is laid in Flemish bond. The other sides are common bond. A beltcourse surrounds the building between its first and second floors, enhancing its horizontality. Brownstone arches appear above the doors and first-story windows of the main façade and above both stories of the end façades. The concrete stoops and metal railings are recent additions. Nothing of the interior of the original structure has been preserved.

The Rocky Hill Historical Society, established in 1962, rehabilitated the badly-deteriorated building. The museum opened to the public on Sunday, October 22, 1967. Harvey P. Conaway of Hamden was employed as the architect for the renovation of the Academy Hall building. The museum was dedicated as a depository for historical items, as well as for the education of the public. The RHHS celebrated the 200th birthday of Academy Hall with a party in 2003.

Included at the museum are the Ethel Miner Cooke library and exhibitions on Danforth Pewter (the poor man's silver) and the Morgan Site, including pottery and stone from Native American agricultural settlements dating back to the 13th Century. Events such as tours and parties are regularly organized. A store where handmade ornaments can be purchased is also available.