Broad Street United Methodist Church was organized in 1875. Originally, the church was housed in a three-room building. It quickly outgrew that. The present building was built in 1885 in High Victorian Gothic style. The church was where President William McKinley and his family worshipped when he was Governor of Ohio. The church is on the National Register of Historic Places.

Broad Street United Methodist Church is on the National Register of Historic Places. It was where former President William McKinley and his family worshiped when he was Governor of Ohio. 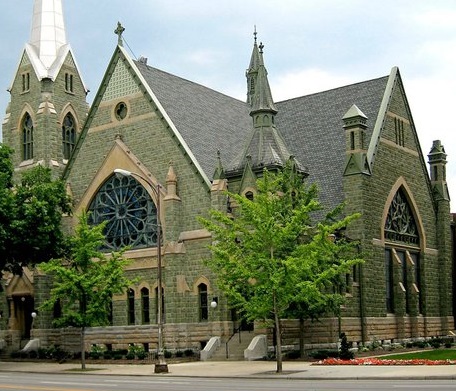 Architect Joseph Warren Yost designed the building. He chose the popular Akron Plan for the interior of the building, which featured an auditorium style sanctuary with a sloping floor as well as individual spaces for Sunday School rooms. For the exterior, the dominant feature is the green serpentine stone as the facing on the brick walls. There are pointed-arch bays, asymmetric massing, and complex gable roofs.

The new building was first used on Easter Sunday in 1885. It’s windows on the west wall of the sanctuary were first in Central Methodist Episcopal Church. They were installed at Broad Street in 1936. The windows on the east wall were designed and installed in 1908 by Von Gerichten Studios of Columbus.

The exterior got a facelift in 2007-2008. The original Serpentine on the exterior was replaced by designer stone that was tinted and textured to resemble the original. The church also features a Feglemaker pipe organ that was first installed in 1906.