The Southern Theatre is the oldest surviving theater in central Ohio and one of the oldest in the state. It opened in 1896 as part of the Great Southern Fireproof Hotel and Opera House. Its opening night saw a touring production of “In Gay New York” and “An American Beauty” starring Lillian Russell. Before being converted into a movie theater, the Southern also hosted such on-stage personalities as Ethel and Lionel Barrymore, Sarah Bernhardt, Al Jolson, and W. C. Fields. The Southern Theatre closed in 1979, though it was renovated and reopened for live performances in 1998.

The Southern Theatre is one of the oldest surviving theaters in Ohio. 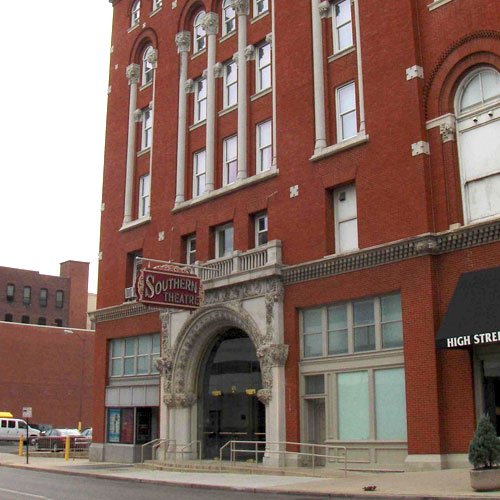 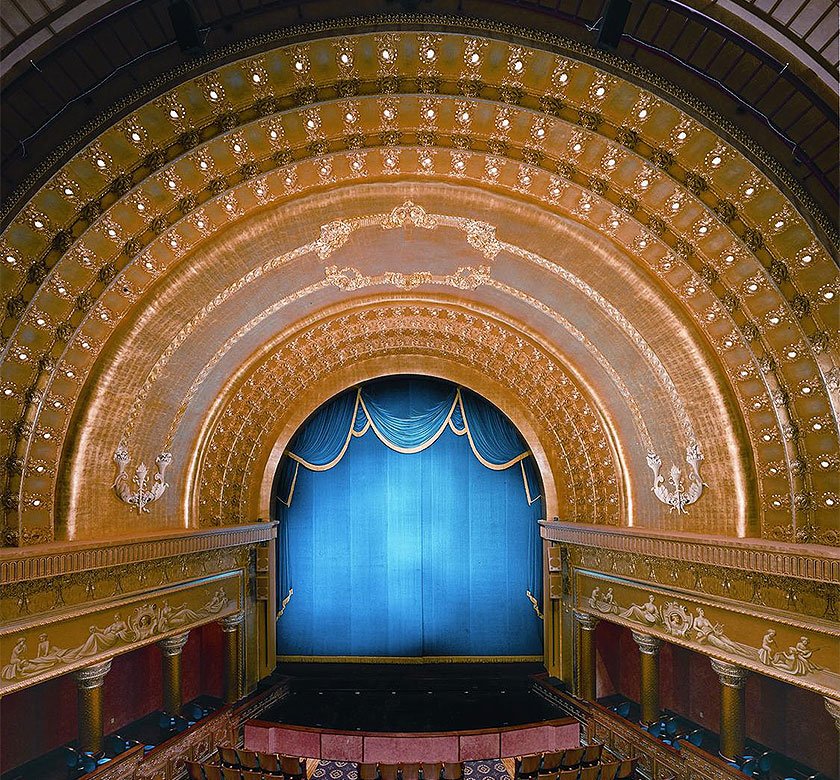 The construction of the Southern Theatre came after five downtown theaters in Columbus burned down between 1889 and 1893. With these recent decent disasters in mind, the theater was built as the Great Southern Fireproof Hotel and Opera House. The theater and hotel were designed by the architectural firm of Dauben, Krumm, and Riebel, with decorations by Menno S. Detweiler. Construction began in 1894, and the theater was completed in 1896. The grand opening on September 21, 1896 showcased the auditorium’s 1,723 plush seats, “fireproof” tiles, and large stage. The size of the stage came in handy when a touring production of Ben-Hur came in 1903 with its 350-person cast.

The Southern Theatre incorporated many modern elements in its design. Its ceiling of concentric arches created an acoustic system that is still considered impressive. The theater also used electricity, making it one of the first commercial facilities in Columbus to do so. In 1901, the opera house and hotel were struggling to recoup their $1.5 million investment. So, the theater was sold for $235,000 at auction to the Lazarus brothers, Fred and Ralph. They began a series of renovations, including equipping the theater so it could show movies as well as live performances. By 1931, the Southern Theatre had moved away from live performances and toward movies only.

Decades later, the Lazarus family sold the Southern Theater to a realtor who hoped to turn it into apartment buildings and a parking garage. Nothing came of it, however, and the theater closed in 1979. In 1982, the Great Southern Theater and Hotel was added to the National Register of Historic Places and purchased by Bill and Barbara Bonner. The couple sold the theater to the Columbus Association for the Performing Arts (CAPA) four years later. Funds from the State of Ohio, City of Columbus, and private donors paid for the renovations to come in the late 1980s and 1990s.

Many of the original features of the theater were carefully preserved. The stained glass in the entryway was restored by the same company, Franklin Art and Glass, that had installed almost a century before. The Edison-style lightbulbs were reproduced, and new dressing rooms were added by lowering the basement floor. After fourteen months of work, the Southern Theater reopened on September 26, 1998. The 925-seat theater is now home to Opera Columbus, Chamber of Music Columbus, the Columbus Jazz Orchestra, and the ProMusica Chamber Orchestra.

Open on show days only. Ticket office opens 2 hours before the show.