1930s colored postcard of the church 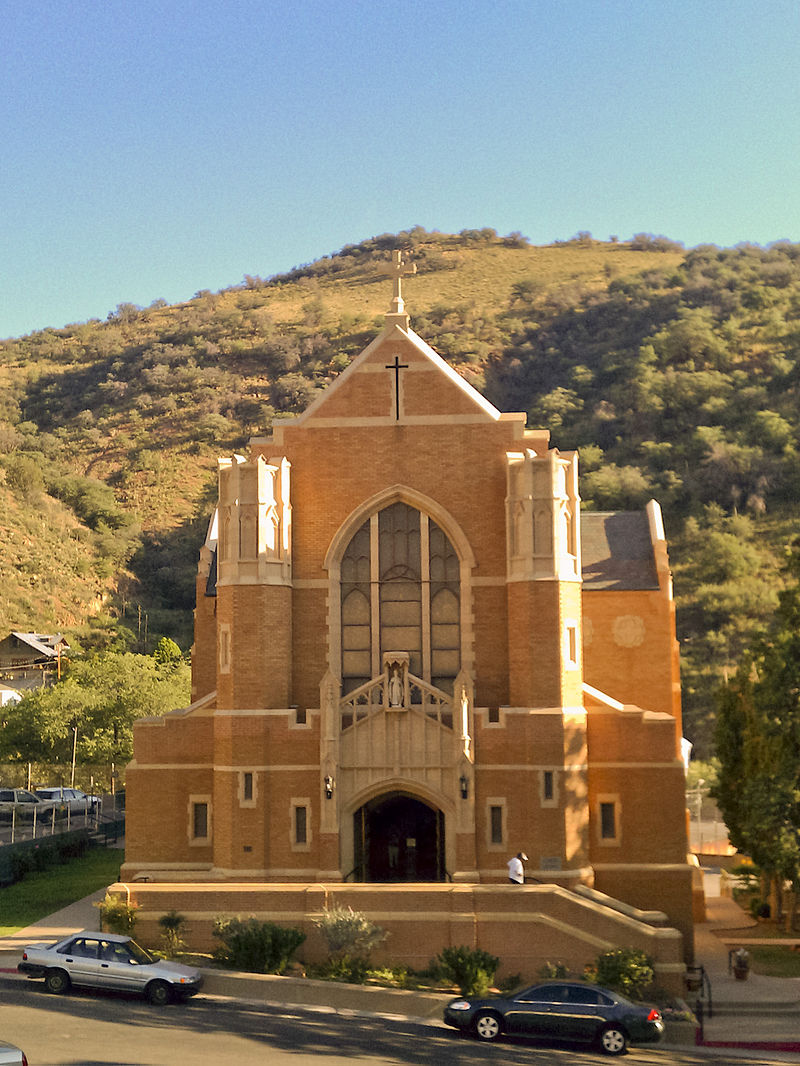 The interior (chapel) of the church 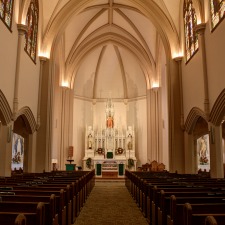 One of the 41 stained glass windows 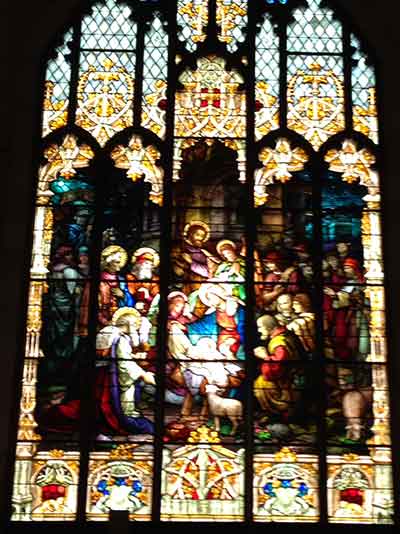 *The church's early history as presented by its historians

"Thousands of people were streaming into Bisbee, 'Queen of the Copper Camps',  in the early 1900’s, brought by the copper boom and the promise of jobs and prosperity. A small cabin near Naco Road served as the first Catholic church, the first church of any denomination organized in the Bisbee area.  From 1884 to 1890, a large adobe building on Quality Hill served as the town’s second Catholic Church.  This adobe building was soon inadequate for the growing population, and in 1891 a white frame building at School Hill on Clawson Avenue was built.  Many of the residents were of Welsh and Irish descent, and the church was named for the patron saint of Ireland and consecrated as the first St. Patrick Church. The parish soon became known as 'St. Pat's', an affectionate nickname still used by local residents

In 1913, French-born Father Constant Mandin arrived in Bisbee and discovered the growing congregation literally overflowing from its wood frame church. Parishioners arriving late to Mass often found the building filled, and ended up kneeling in the weeds outside.  Fr. Mandin immediately organized his flock to build a permanent structure not only large enough to serve the parish but also worthy of being dedicated to the glory of God.

The site for the new building was donated by Thomas Higgins, a mine owner who held deed to all the land in the area still called Higgins Hill. There was only one stipulation to the generous donation:  the church must face the mountain peaks and Higgins' mine. With land to build on, Fr. Mandin traveled to Los Angeles and hired well-known architect Albert C. Martin to design plans for the proposed $40,000 edifice.  But the initial budget was too small to build the church Fr. Mandin dreamed of raising, and parishioners decided to authorize a staggering debt of $150,000 to fulfill their pastor's vision.

On Labor Day 1915, parishioners began excavating the hill of rock where the new building would stand. After bone-chilling shifts in the mines, parish men reported to Higgins Hill to work another four hours transforming rock into level ground.  When construction began, Fr. Mandin often donned work clothes and labored alongside his parishioners and non-Catholic supporters to complete what had become a community project. Four cars of terra-cotta from Gladding McBean Co. of Lincoln, CA were delivered by railroad to Bisbee in 1916.  The original slate roofing tiles were shipped from Vermont, and the stained glass windows from St. Louis, MO.

Finally, on Sunday, September 30, 1917, the existing St. Patrick Catholic Church was consecrated by the Most Rev. Henry Granjon, Bishop of Tucson, and the first Mass was celebrated.  Perched 200 feet above the floor of Tombstone Canyon, the church continues to stand as a monument to the exuberant determination of Bisbee's early residents to transform a primitive mining camp into one of the largest commercial centers in early Arizona."

Once completed, the church was $118,000 in debt. Fortunately, the church and the city organized many fundraisers and dances to raise enough money to pay off the debt, which they did, after seven years. Throughout the 1950s and 1960s, the church was expanded here and there. However, by the 1970s, the next door church school was closed, the nuns were sent elsewhere and priests came and go more quickly. Although the city (and congregation) has shrunk, it is still very active and visitors from all over marvel at the structure and its interior.