Charlotte Baker Montgomery at the site of her mother's historical marker 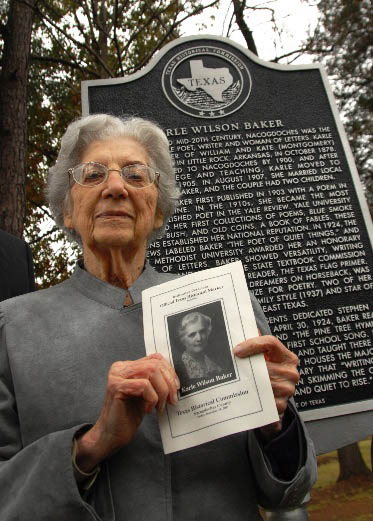 Karle Wilson Baker was born in Little Rock, Arkansas on October 13, 1878 to William Thomas Murphy and Kate Florence Wilson.  Her first name was originally spelled Karl with the “e” added later, first appearing in her diary in 1893.  She attended public schools and graduated from Little Rock Academy High School in 1898.  She attended the University of Chicago from 1898 to 1901 and later attended Columbia University and the University of California at Berkley but never received a degree from any of them.  The only university degree she received was from Southern Methodist University, who awarded her an honorary doctorate of letters in 1924.1

From 1925 to 1934, Baker devoted her life to writing and teaching, working in the English department at Stephen F. Austin State Teachers College, known today as Stephen F. Austin State University.  She wrote personal and historical essays, novels, nature poetry, and short stories.  Her writings have appeared in Atlantic Monthly, Harper’s, Poetry: A Magazine of Verse, and the Yale Review under the pen name of Charlotte Wilson. In 1931, a volume of her poems, Dreamers on Horseback, was nominated for the Pulitzer Prize for Poetry. 2

By the time of her poems’ nomination, she had begun to focus on prose writing.  In 1925 she wrote The Texas Flag Primer which was a Texas history book for children that was later adopted by the Texas public school system.  She published a second reader for school children, Two Little Texans, in 1932. Her most notable work was a novel published in 1937, Family Style, which is a fictional account of the effects of sudden wealth set against the backdrop of the East Texas oil boom.3

Known as one of Texas’ most talented writers, Baker received the most recognition and honors of any poet in Texas during the 20th century.  The recognition she received from the Yale Review and Yale University Press established her reputation across the state and the nation.  She died on November 9, 1960 and is buried in Nacodoches, Texas.4