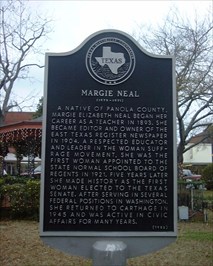 Margie Elizabeth Neal was born on April 20, 1875, near Clayton, Texas and was the second of four children born to William Lafayette and Martha Neal.  She attended Sam Houston State Teachers College but never graduated.  She spent a short time teaching in Panola County and in Fort Worth before returning to Carthage in 1903.  Her return to Carthage was less about disappointment in her teaching career and more about the failing health of her mother.1

Before she returned to Carthage, her father had purchased the Texas Mule, a weekly newspaper.  She became the editor and publisher of the newspaper and almost immediately changed its name to the East Texas Register.  She continued publishing the paper until she sold it in 1911.  She was one of the first women in Texas to publish a newspaper and used it as a platform to support women’s suffrage and the Democratic Party.2

Neal was elected from Panola County as a Texas State Senator in 1926 and went on to serve four consecutive terms.  Her passion for education and the legislature’s inability to raise academic standards were what led her to run for the seat.  She introduced a bill that established the State Board of Education and sponsored a bill that introduced physical education classes into the public school system.  She also actively supported a bill that made the study of state and national constitutions a mandatory part of the curriculum, but this bill never passed.  She was an essential part of legislation that appropriated the largest amount of funding (at that time) for rural education in Texas, and helped support legislation for the rehabilitation of the handicapped.4

In 1935 she continued her career in public affairs, traveling to Washington D.C. to work with the National Recovery Administration and the Social Security Administration.  She was eventually able to transfer back to her home state, working in Dallas and San Antonio for the Manpower Commission as a community facilities analyst.  She resigned from this position and returned to her hometown of Carthage, where she continued to participate in local affairs for many years.5

On June 15, 1952, a celebration was held in her honor in Carthage.  Among the speakers at the event were Lyndon Baines Johnson (future President of the United States) and Texas Governor Allan Shivers.  Neal died in Carthage in 1971 and is buried at the Oddfellows Cemetery there.  A historical marker was placed on the town square in 1988 honoring her life and works.6