Founded in 1893, Sears, Roebuck and Co. was the nation's largest mail-order retail store by 1900. By 1904, the company purchased 4l.6 acres on Chicago’s West Side in which to build its massive complex. Ground was broken on January 24, 1905 and, when completed, served to symbolize the company’s dominance of the mail order industry. Included in the complex was the printing plant that generated the once famous Sears Catalog as well as the original fourteen-story Sears Tower. 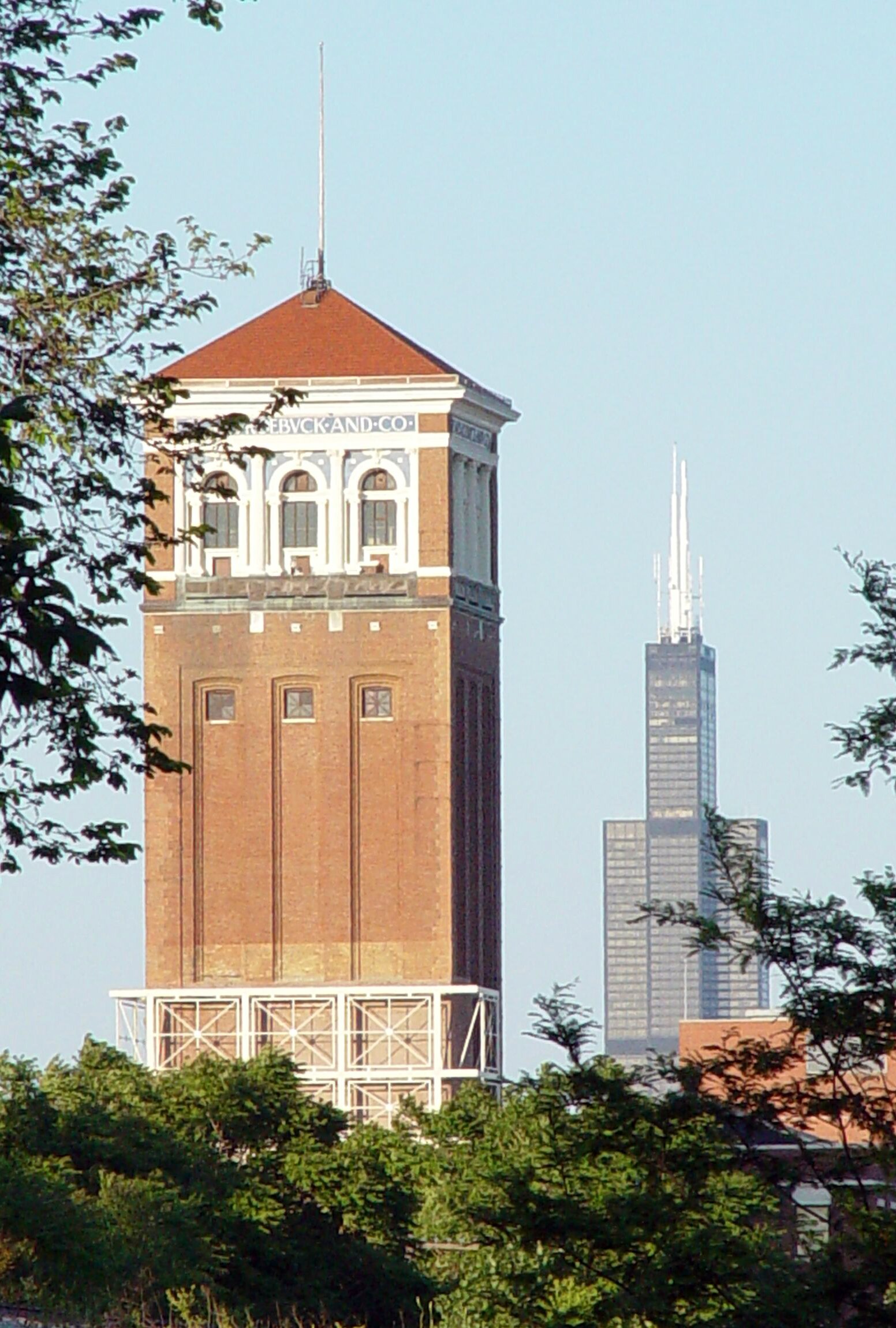 By 1913, Sears had build an athletic complex. This was a track meet held at the Sears & Roebuck complex's track field. Source: HomanSquare.org

Upon completion in 1906, the  Sears & Roebuck complex -- and it's then famous 14-story "Sears Tower," served as the epicenter of what became the “World’s Largest Store." More than that, it symbolized much of consumption culture that developed in American after the Industrial Revolution. Dry goods stores gave way to large department stores, including Sears & Roebuck. 1

The 19th century provided the mechanisms -- and the development of the middle class -- necessary for a consumption culture. What followed was mass advertising and large department stores, often larger than a city block.  Like many things of that era, a sure sign of success involved grandness and size, from ships like the Titanic to Sears and Roebuck's massive complex. Department stores held festivals, adorned stores with Egyptian and Roman decor, and otherwise looked to impress people. It was the era of massive machines and massive corporations.2

Stores then, as it is today, only gain success through clever marketing and providing products that consumers find worthy of purchase. Sears' rapid climb to success involves innovative ideas. For instance, "Despite coming into the mail order business twenty years after Montgomery Ward, it didn’t take much time at all before Sears surpassed the company in sales — making $11 million by 1900. His success was due in great part to innovative marketing ideas such as printing his catalog smaller than his competitors so that it would end up on the top of mail stacks in American homes (realizing that people usually stack from large to small with the smallest on top), and printing his order forms in German and Swedish to appeal to the country’s growing immigrant population."3

The Sears and Roebuck complex was not only large, it included the large 14-story building to help note its size. The complex covered an area totalling 3.3 million square feet (two city blocks). The 14-story tower stood at the center, later becoming the home of WLS-AM (World’s Largest Store) radio, a radio station that enjoys a storied history in Chicago. Much of the complex has been destroyed, but the tower remains, as do many of the significant buildings within the complex. 4

However in its heydey, it was, as Richard Sears defined it, a city within a city. The complex managed its own  fire department, with volunteer firemen, including its own fire sprinklers supplied by a 200,000 gallon water tank. As well, a newspaper publicity office; research and development laboratory, and bank operated in the complex. Moreover, "The electricity supplied by the power house operated the ventilating system, escalators, and transmission belts for carrying merchandise between the stock departments and the shipping departments. Over nine miles of pneumatic tubing quickly transported letters and other papers from one department to another."5

The 14-story tower also provided access for residents to visit the top floor "skydeck," similar to the one that would famously adorn the 1973 Sears Tower -- the tallest building in the world at the time -- that would replace the complex as the stores' headquarters.6

Other buildings that remain include the printing building (where the famous catalogue was printed), the advertising building, administration building, and the power house. Those buildings, along with the 14-foot tower (and truthfully the 110 story skyscraper, too) represent an era where department stores played a significant role in American culture. Although consumerism remains, department stores' popularity and economic success has declined significantly.

1 Edd Applegate, The rise of advertising in the United States: A History of Innovation to 1960. Scarecrow Press, 2012.