On September 12, 1992, the Native American Studies Department of West Virginia University held a ceremony for Chief Leon Shenandoah to plant a Peace Tree on campus to commemorate the five hundred year anniversary of Christopher Columbus’ arrival in the Americas and to reflect on the University’s commitment to studying Native American history. Peace Tree honoring ceremonies are held annually. 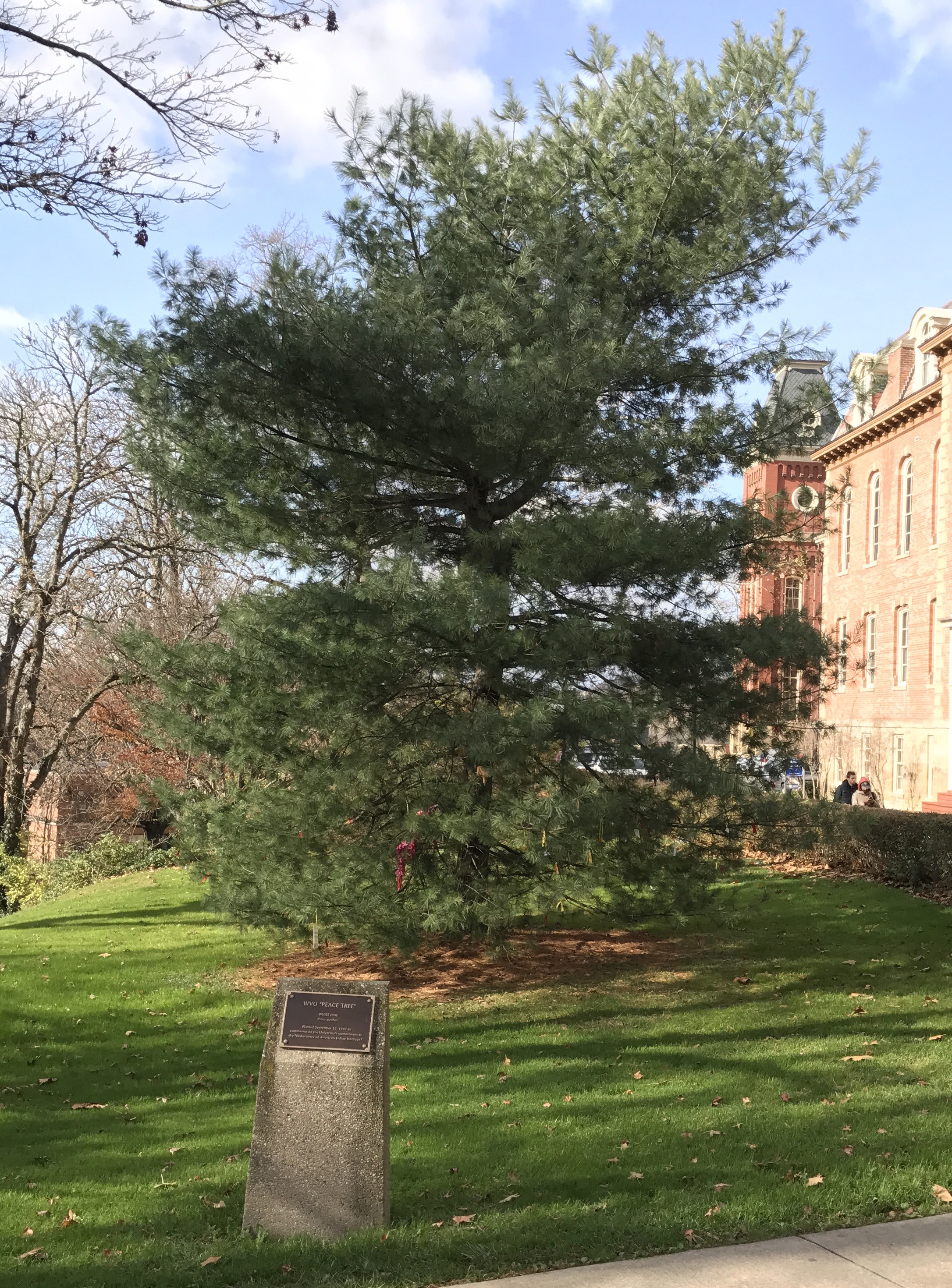 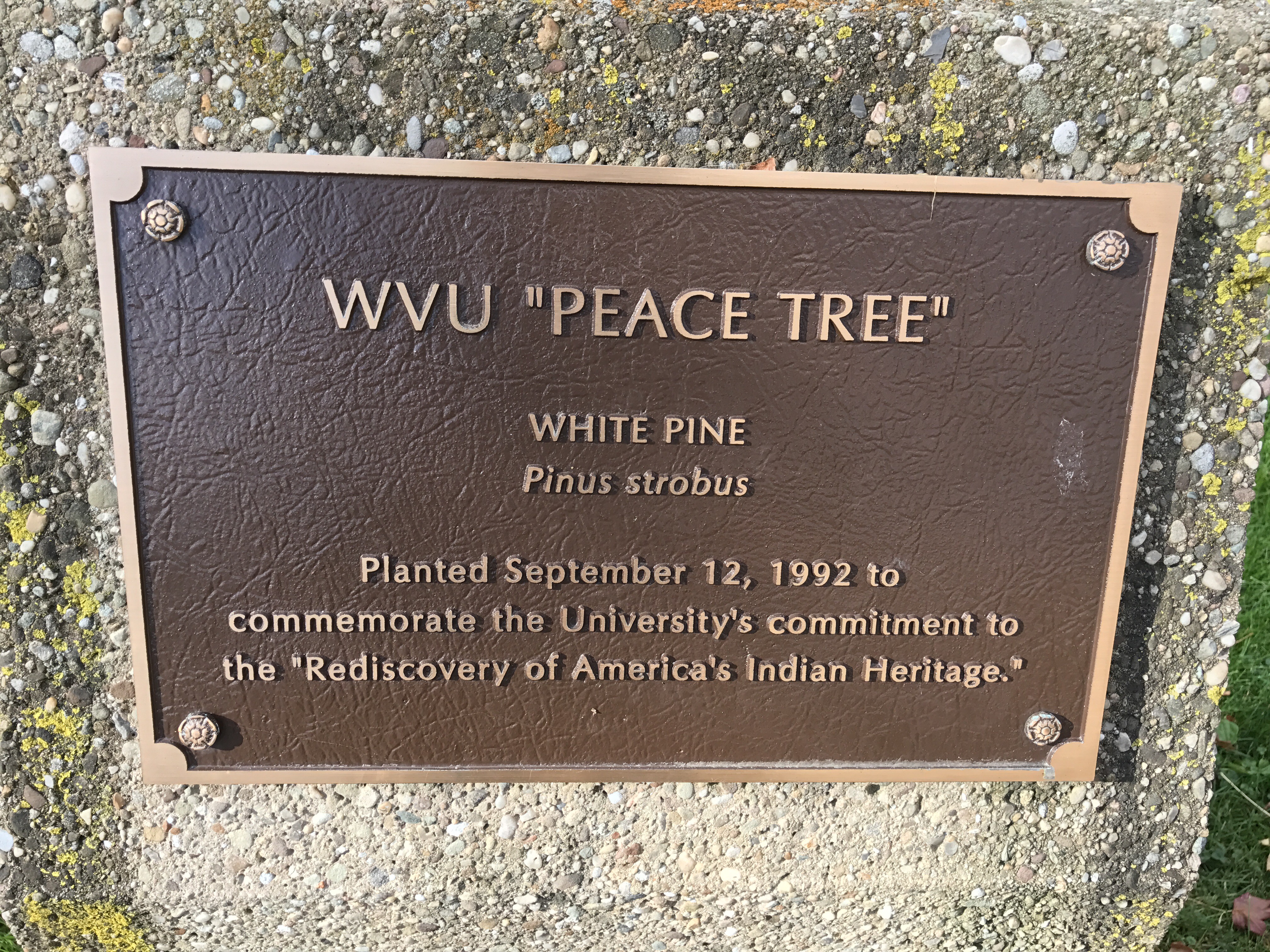 An artistic rendering of "The Tree of the Great Peace" (1985) by Chief Oren Lyons of the Onondaga Nation. 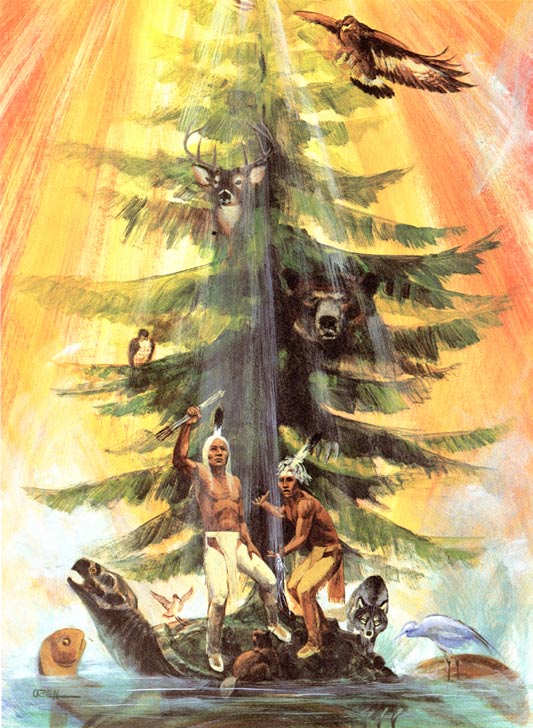 A white pine tree was chosen because it represents peace and democracy. According to Iroquois tradition, the white pine symbolizes the unity of the five original nations of the Iroquois Confederacy – Mohawk, Cayuga, Oneida, Seneca, and Onondaga.1 The famous painting by Onondaga Chief Oren Lyons, The Tree of the Great Peace, depicts this event and inspired the planting of WVU’s Peace Tree. Chief Oren Lyons spoke at the Peace Tree Ceremony in 1994, saying:

The Peace Tree was designated as one of eight historic trees on the WVU campus in 1995. A Marker was placed near it, reading:

On August 8, 1996, the tree was chopped down by vandals. Mohawk Chief Jake Swamp was invited to plant a new Peace Tree shortly after on October 19, 1996. The new white pine was donated by WVU tree surgeon Daniel Brown from his tree farm. The second tree still stands today as a "healthy, visible sign of the indestructibility of peace," according to WVU Native American Studies Committee member Anna Schein.4

The Peace Tree Ceremony is held annually on campus and is open to students, faculty, and members of the community. The Native American Studies program invites prominent Native American leaders, authors, poets, artists, and other important members of the Native community to come speak at the annual ceremony. Past guest speakers have included Dr. Daniel Wildcat of the Yuchi Tribe, Modoc author Cheewa James, and Lakota Chief Arvol Looking Horse.5