The first reported mass in this area supposedly took place in either 1733 or 1734 as French-Canadian fur trappers travelled throughout the area when it was controlled by the French Empire. A catholic presence would not be felt here again until the late 1860s-late 1870s as European immigrants, mainly from Germany and Ireland, chose Grand Forks to be their new home. From the mid-1870s to 1909, simple, log buildings served as the place of worship for the local catholics, at least one destroyed by a tornado. This structure you see here was constructed from 1908-1909 by regional company, the Hancock Bros. The church is still active today.

St. Michael's as it looks today 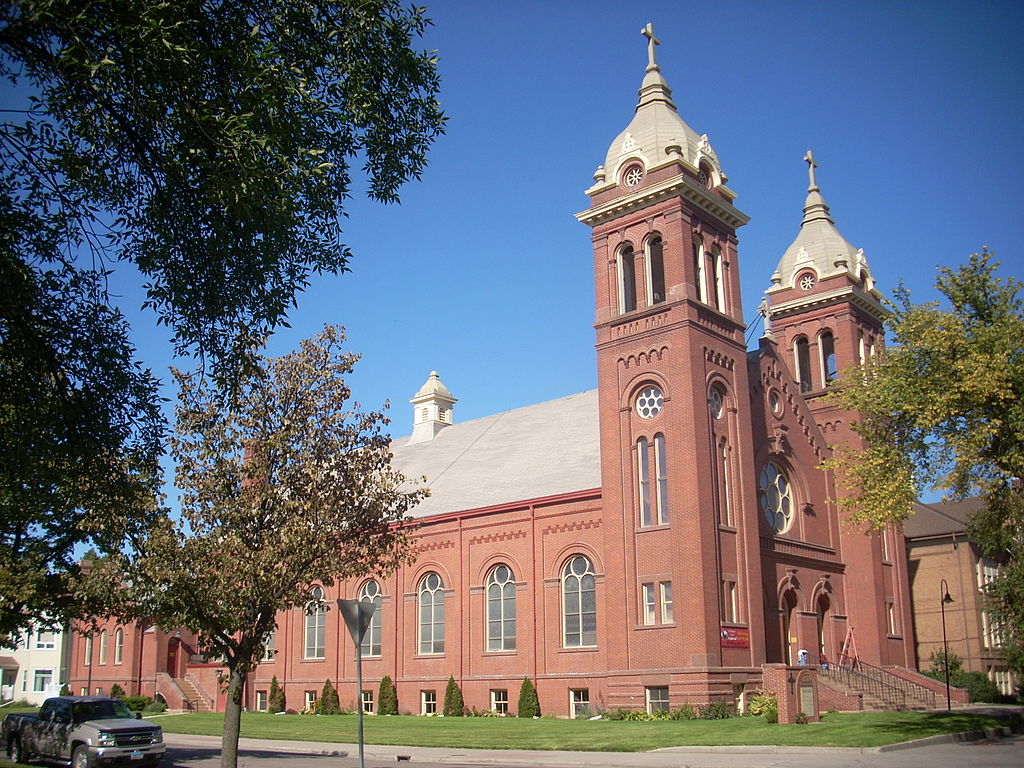 Undated, retouched color photo of inside the church during Christmas 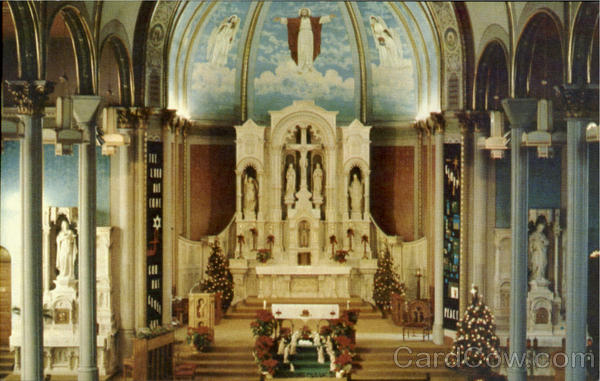 Undated Black and white photo of the inside 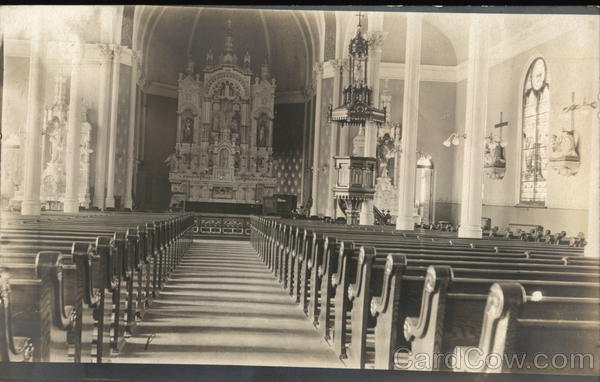 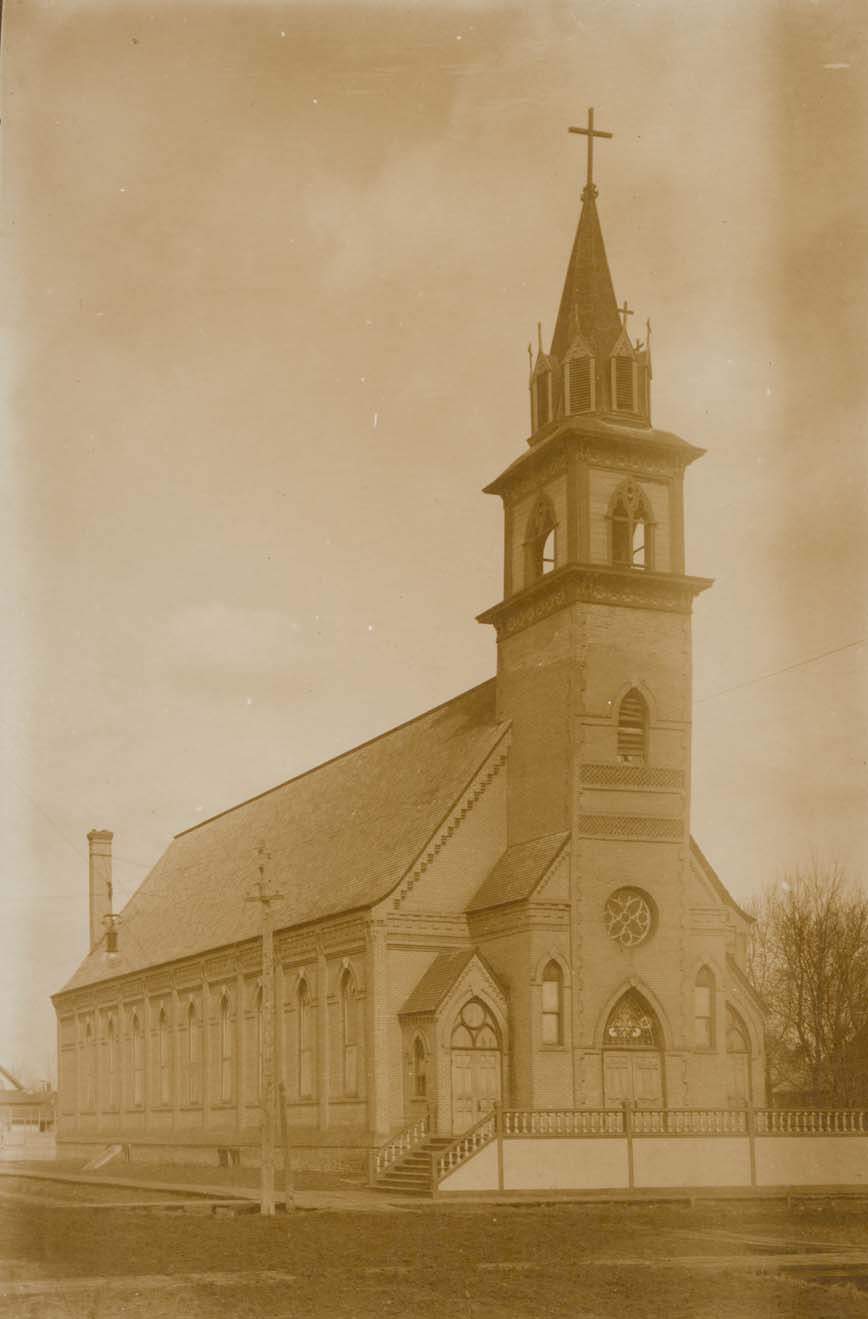 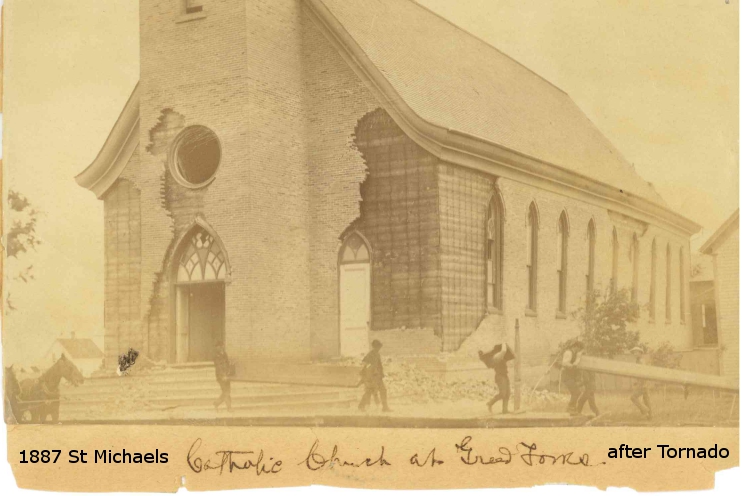 St. Michael's as it looks today 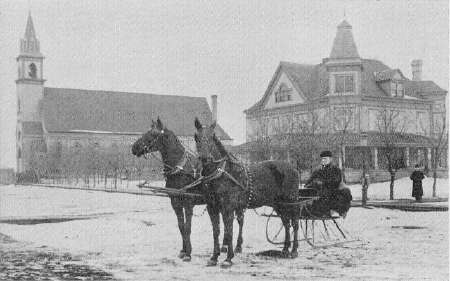 "St. Michael’s has been around a long time. Apparently, the first masses conducted with any regularity started in 1872 when Father Simonet, coming down from Pembina and St. Boniface in Manitoba, gathered together an assortment of early settlers who lived in the neighborhood of the 'Grand Forks’ the junction of the Red and Red lake Rivers. The first congregation consisted of French-Indian families, some French Canadians and newly arrived Irish and Germans. One account, (one which is hard to substantiate) says that the first Mass in the parish area may have been sometime around 1733 or 1734. Whatever the accuracy of the report, there is no doubt that French explorers and fur traders brought Black-robed missionaries with them on subsequent occasions while they investigated the Red River and its tributaries for possible trade and hunting purposes. With the passage of time, the French-Indians (Metis) people organized their great hunting expeditions and soon the Red River cart commerce got underway. Priests, at times, accompanied the groups as they camped along the River. Masses must have taken place in the first decades of the 1800’s in St. Michael’s area.

The advent of river boat traffic and the first homestead activity brought early Canadian and American settlers to join the French-Indian families along the wooded sections of the Red and Turtle Rivers in the 1870’s. In fact, the great uncle of some of our parishioners, an Irishman named Michael Ferry, settled on a piece of land near the Turtle River (later Manvel) in 1869. It was this kind of permanent settler that brought Father Simonet to the Grand Forks area in 1872. Te priest, in writing to hiss Canadian Bishop in 1873 says, 'I have seen 24 Catholic families within a distance of four miles and I was informed that almost all the other families up to the Crossing are also Catholic….I have promised to go back to Grand Forks in the Spring, and they are to try to build a temporary chapel.'

And so St. Michael’s began. There may, as the letter says, have been a tiny log or frame chapel someplace along the river, which was used for a few years; or Mass might have been offered in the rooms of a primitive settler’s cabin. In 1878, something more permanent was built. Capt. Alexander Griggs, a veteran riverboat man and local community promoter, gave Father L’Hiver (the second resident pastor), a piece of lane at Sixth Street and Demers. Here a frame church, looking much like a machine shed with a free standing bell tower was constructed. (Father L’Hiver planted potatoes in 1879 on what is now DeMers Avenue.) The new church proved to be too small for immigrants were now coming in great numbers, and the railroad had replaced the steamboats. Within five years, the parish was building again- this time on a spot on the 'edge of town' – which even today, a century later, continues to be the site of St. Michael’s parish life – Sixth Street, between Fifth and Sixth Avenue. They built a wood structure which really looked 'like a church.' It was surfaced with bricks, and had a 105-foot steeple. This building, dedicated in 1883, is the grandfather of today’s St. Michael’s Church. The local newspaper said it was the “largest as well as the finest church edifice in Dakota.” But it should have been a large and fine building, for by now, records say St. Michael’s had 500 families. They were spread on muddy roads over half of Grand Forks County and extended well into Minnesota.

About this time the parish started worrying about such things as balanced budgets, legality, and other technical niceties, so they incorporated on July 23, 1884. On that date, the Territory of Dakota, with its capital at Yankton, said that henceforth until the end of time St. Michael’s would be known as “a body politic and corporate” and that its name would be 'St. Michael’s Roman Catholic Church of Grand Forks , Dakota.'

It was during these years that an early cabin-sized priest house was replaced by the present St. Michael’s rectory. This building clearly shows the foresight (or perhaps ambition) of these early parishioners, for it was a huge structures containing 25 rooms with its own little steeple and a wrap around porch (no longer present). “It was a good solid building for it has been the parish center through all the years and still contains quarters for the priests and over a dozen offices and meeting rooms.

The 1883 church was doomed to be a short lived parish center, for it was blown apart in an 1887 wind storm (some say it was a tornado). A second church had to be built, and that meant real trouble for the newly arrived pastor, Father Edward J. Conaty.

But first a word on pastors. The first few pioneer priests had come from Canada. But soon the Bishop of St. Boniface was able to coax the American Bishops to take care of the Red River. So French priests continued to come, but now under St. Cloud and Yankton diocesan auspices. With Father Conaty, it seems the Irish began to replace the French.  This remarkable man, a former lawyer from Massachusetts, is one of St. Mike’s great heroes. He presided over construction of a large, brick building with high ceilings, beautiful columnns and elaborate alter. Dedicated in 1887, it was an impressive structure. A contemporary description said 'the interior is finished in cathedral form and the auditorium is the largest in the state.'

But, it appears that God in his divine providence wanted something even bigger and better at St. Michaels, for in 1907, the church was destroyed again, this time by fire. Poor Father Conaty had to get the folks together and try again. This time they were really 'thinking big.' They hired the Hancock Brothers firm in Fargo. These English born architects were the designers of part of the state capitol building, St. James church in Jamestown, and a number of government buildings throughout the area. They put together the magnificent Romanesque structure that is still the gathering place for St. Michael’s people.

The parish house was moved from its old location to the other end of the block, so the big new church would have room to stretch out in all its grandeur. The building was dedicated in 1909 and the newspaper called it, “the finest church building in every particular in the northwest.” We’re not sure what the 'Particulars' were, but they must have meant the beautiful stained glass, done by the Munich Studios in Chicago, and the 'lower Auditorium' which was to be used for 'lectures and entertainment.' The auditorium, the newspaper, the newspaper said, “is well furnished with opera chairs and has a seating capacity of 1000 people. “(Through the years events have proved the news account correct in this sense, - there’s been lots of 'entertainment' but, alas, not much 'operas' or 'lectures.')

St. Michael’s parishioners have always considered their church to be the most beautiful in the state and some have said that it is also the 'biggest church in the state.' in fact, some St. Michael’s fans resented the idea that a relatively plain and smaller church in Fargo became the Diocesan Cathedral, so sometime in the 1910’s or 1920’s they began to call St. Michael’s a Pro-Cathedral. They even installed in its sanctuary a Bishop’s chair with a fancy overhanging top and an artistic picket fence around it. Apparently, the Bishop insisted on staying in Fargo, for after a decade or two, a realistic pastor dropped the term 'pro-cathedral' from St. Michael’s letterhead.

Nothing in St. Michael’s 120-year history can compare to those fateful moments in April-May, 1997. For a good part of a month there were no masses, no Holy Sacrament present, no parishioners, just silence, interrupted occasionally by the sounds of water.  St. Michael’s did exist of course, but only in the hearts of thousands of its members scattered in every direction throughout mid-America. It existed in their deep concern and continual prayers.

The first returning scouts were relived to find that a good portion of St. Michael’s physical plant was untouched by the surrounding water. God preserved the towers and sanctuary, so also the upper portions of the school and parish house. Soon the pumps and shovels of the brave working people exposed the damaged areas. Volunteers from near and far ripped out walls, furniture, and equipment, filling at least twenty semi-trailers with debris. Finally, after weeks of drying, sanitizing, and patching, life began to emerge in a limited fashion. With the advent of 1998 some school areas were readied. A house across 5th street and a large mobile home provided classroom space. By mid-1998 the Youth Center and lower floors of the school began to be utilized. Parish activities took place in the gutted church basement (masked in plastic and bare of any decorative features.) By Spring 1999, the foundation of the church was exposed with drains and pumps installed. The 'courtyard' in the center of St. Michael’s buildings was ripped apart and new utilities were set in place. Summer 1999 saw the dismantling and repair of the church steps and entry ways. Fall of that year witnessed the completion of the church basement and by Spring 2000 it could again be the center of activities."

For some reason not determined at this point, various sites have this church at different, yet very close, addresses. The address posted here comes from the church's official website.