In 1873, the Art Association of Jacksonville was formed with the main purpose of studying and appreciating fine arts. In 1915, the Art Association of Jacksonville was given the David Strawn home to be used as an art gallery. The hallway, parlor, and sitting rooms have been transformed into gallery viewing spaces. The gallery season opens in September and ends in May displaying a fine collection of area artwork of which changes monthly. Gallery openings are held each month and are open free to the public with handicap accessibilities. 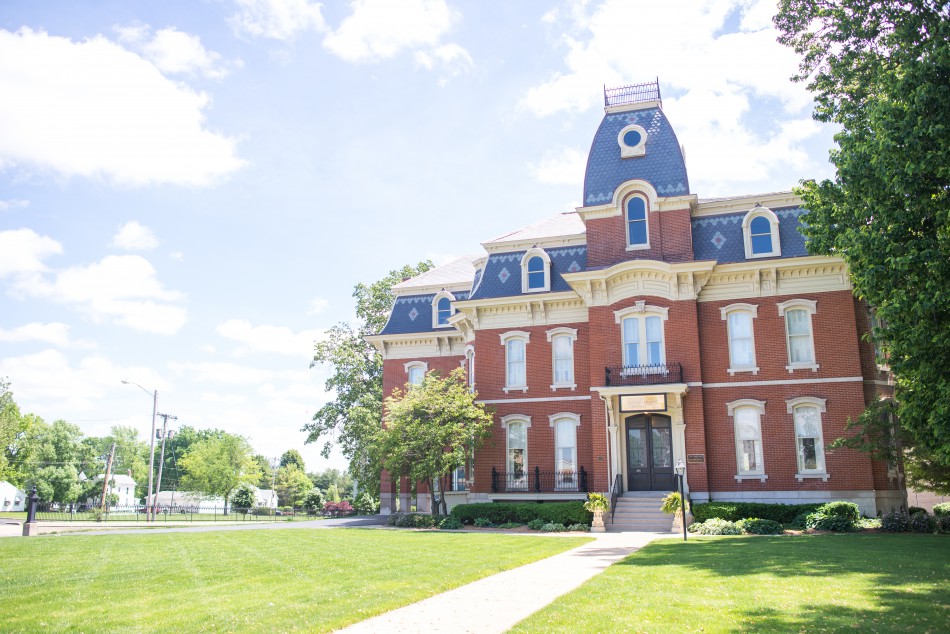 One of the wealthiest and best-known men of Morgan County, Julius E. Strawn, built this house in 1880. He was a benefactor of educational and religious institutions, and a son of an early settler of Morgan County. The Strawn mansion in its earl years was a place for social gatherings and was the place the Strawn’s entertained many distinguishable people.

The Strawn family history in Morgan County dates to 1831. Jacob Strawn, Julius’ father, a Pennsylvania native arrived in the county to become a cattle breeder and acquired a tract of land. Jacob acquired additional tracts in order to become a leading landowner and cattle raiser of the region. He later became known as the cattle king. Jacob Strawn and his family originally settled five miles southwest of Jacksonville in a log house located at Grass Plains. Jacob was able to significantly improve business by purchasing more land as his profits continued to increase from his herds of cattle which were sold in the St. Louis market. In a 1941 story published in the Journal of the Illinois State Historial Society, MacMurray College President C.P. wrote that, “At the peak of his operations, [Jacob] Strawn personally bought and sold larger [cattle] herds than any other man in the United States.” It is rumored that before his death in 1865, he owned up to 18,000 acres of land in Morgan and Sangamon counties. The estate was worth about $1 million when he passed.

Julius was born on December 2, 1835. At the age of just ten years old, he was sent to a private school conducted by a well-known missionary, Rev. William Edy. He later attended Illinois College and before his graduation in 1857, he traveled to New York and Pennsylvania as an agent for his father’s successful cattle business. Upon his return to Morgan county and cultivating his father’s land, he was appointed to the staff of Governor Richard Yates when the Civil War broke out. Once the Civil War had ended, Julius to indulge his taste for the arts. He paid visits to all the leading galleries, museums, and historic memorials of the British Isles and central Europe. In Julius Strawn’s time, he reigned as one of the leading citizens of Jacksonville and Morgan county. He was a trustee of both Illinois College and the Jacksonville Female Academy.

After the death of Julius Strawn in 1865, his widow occupied the mansion. It had been her dream that following her death, the home would become a center of art in Jacksonville.

Phebe Gates Strawn was the widow of Jacob Strawn and was one of the wealthiest women in the area when she moved into the mansion in 1882. She had a family tradition to build a home in Jacksonville for her extended family and especially her grandson, Ferdinand Strawn, to be closer to good schools.  In order o go about this process, she hired a local architect, Isaac Coffin Coleman, to design her something that would, “stand out in a community filled mostly with modest wood-frame houses.” Colemen designed the house using the Second Empire style of architecture which was very popular in the United States between 1860 and 1880, and it is generally distinguished by a mansard roof with dormer windows and molded cornices at the top and bottom of the roof line. The construction of the Strawn house took about two years starting in 1880 and continuing well into 1882.

Once the house was completed, Mrs. Strawn; her widower son, Dr. David Strawn; David Strawn’s 11-year old son, Ferdinand; Mrs. Strawn’s bachelor son, Julius E.; Mrs. Strawn’s maiden sister, Eunice Gates; and Mrs. Strawn’s grandniece, Harriet Beebe occupied the house according to Bellatti, great-great-granddaughter of Phebe Strawn. Mrs. Strawn had left her mansion to her three living sons – Julius, Gates, and David – as long at least one of them wanted to live there. After that, it was to be given to the Jacksonville Female Academy for use as an art gallery and school. Bellatti says that Phebe had a lifetime interest in art and was an amateur artist. When the academy closed in 1903 and after Mrs. Strawn’s death in 1906, the disposition of the house was left to the court to decide. In 1910, it was decided that the three sons could buy the house from the institution. Dr. David Strawn donated the mansion and many of its furnishings to the Art Association of Jacksonville and along with the family legacy. As inflation increased, the mansion needed more financial support so therefore some of the property surrounding the house was sold to raise funds.

The Art Association today continues to maintain the mansion and operate the David Strawn Art Gallery fulfilling the spirit of the wishes of Phebe Gates Strawn.