The Rammelkamp Chapel was named after the 6th president of Illinois College, Charles H. Rammelkamp. It serves as a meeting area for many events and organizations on the campus. The building was first built in 1961 and later remodeled in 1979.

Inside view of the Chapel from the upper balcony.

Outside view from the upper Quad on campus. 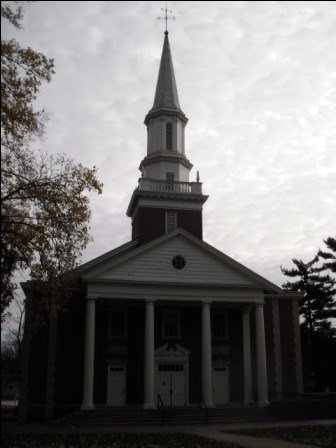 In the Spring of 1961, Illinois College laid down the cornerstone for the new chapel that would be built on the historic campus. Rammelkamp chapel is located on the upper quad on campus, along Park street.

At the time the chapel was being built the President of the college was Vernon Caine, the college’s tenth President, serving from 1956-1973. Even though the chapel looks the same as it did in 1961, it was remodeled in 1979 to keep up to date.  Rammelkamp chapel is still in uses today for various reasons. Most of the campus-wide gatherings are held in Rammelkamp chapel, like the opening ceremony for the school year. Rammelkamp chapel has chapel services for many different denominations including, Catholic, Methodist, and Presbyterian. Convocation events are also held in Rammelkamp Chapel, Concerts, ceremonies. Sometimes there are even weddings in the chapel, with the first marriage being in April of 1962, with the couple both allium of Illinois College. Students have classes or keyboard lab for music in the basement of Rammelkamp. Similarly, Rammelkamp chapel also serves as the office of the college chaplain. Within the chapel the college owns a Hurt Sesquicentennial Organ, which is located in the front on the stage. The board members of Illinois College decided that the organ should be in front so all could see where the beautiful noise was coming from. In Rammelkamp chapel, Illinois College proudly has banners hanging from the wall, stating all of the majors that college offers to their students. When Rammelkamp chapel is filled to its max it holds 800 people, in it benches that originally belonging to a nearby theater. President Caine and his wife’s went to this theater regularly to watch plays.  In 1962, the new chapel was dedicated to the college’s sixth President Charles H. Rammelkamp.

Rammelkamp joined the faculty of Illinois College in 1902. At Illinois College he served as the professor of political science and history. Three years later he became President of the college in 1905. He oversaw Illinois College from 1905 to 1932, when the beloved President of the college passed away. President Caine decided that the chapel would honor the late president Charles H. Rammelkamp. The dedication process happened fast since Rammelkamp’s wife wanted to be present for the dedication of the chapel honoring her husband. At the service, many members of the Rammelkamp family was present. The main speaker was Dr. Hoskin, which Rammelkamp wife picked for the doctor to speak.

As stated before, Rammelkamp Chapel was built on the historic campus of Illinois College which was founded in 1829, being the first college in Illinois to hold classes. Many of the building that are founded on the campus are the same ones that past students studied in, even the first building that was built in 1829, known as Beecher Hall. Also the historical campus had many connections with the sixteenth President Abraham Lincoln. A major thing at Illinois College, is that the college wants their students to make connections to as many people as possible. By doing this the students get the best education from the small liberal arts college that Illinois College proudly is.  Also with it being a small college the students say they feel at home and that they are a part of a community at Illinois College. Illinois College is perfectly placed in the historic town of Jacksonville, because who knows if another town would cherish all the history that the school offers. The town of Jacksonville loves their history that surrounds the town, which you can easily tell if you come for a visit.

The campus is also known as the hilltop which is located in Jacksonville, Illinois, which is only 30 miles away from Springfield, Illinois. The campus was founded in 1829, only a couple years after the town of Jacksonville was established. To learn more about the Illinois College visit, ic.edu. To make a campus visit to see the beautiful, historic campus, especially Rammelkamp chapel, contact the Admission office at 217.245.3030. The office is open Monday through Friday from 8 a.m. to 5 p.m. To learn more about Jacksonville contact, 217.243.5678.

The basement of Rammelkamp Chapel has been converted into classrooms, and reports say doors forcefully swing open and slam shut on their own accord. These strange occurrences often interrupted class sessions. Because of the basement’s layout, one can peer into classrooms that are across the hall. During a lecture, one student saw movement out of the corner of her eye, and she turned to see a woman dressed entirely in white occupying the classroom across from her own. The student was so startled by the experience because she witnessed the woman slowly dematerialize into nothing (Taylor and Horton).