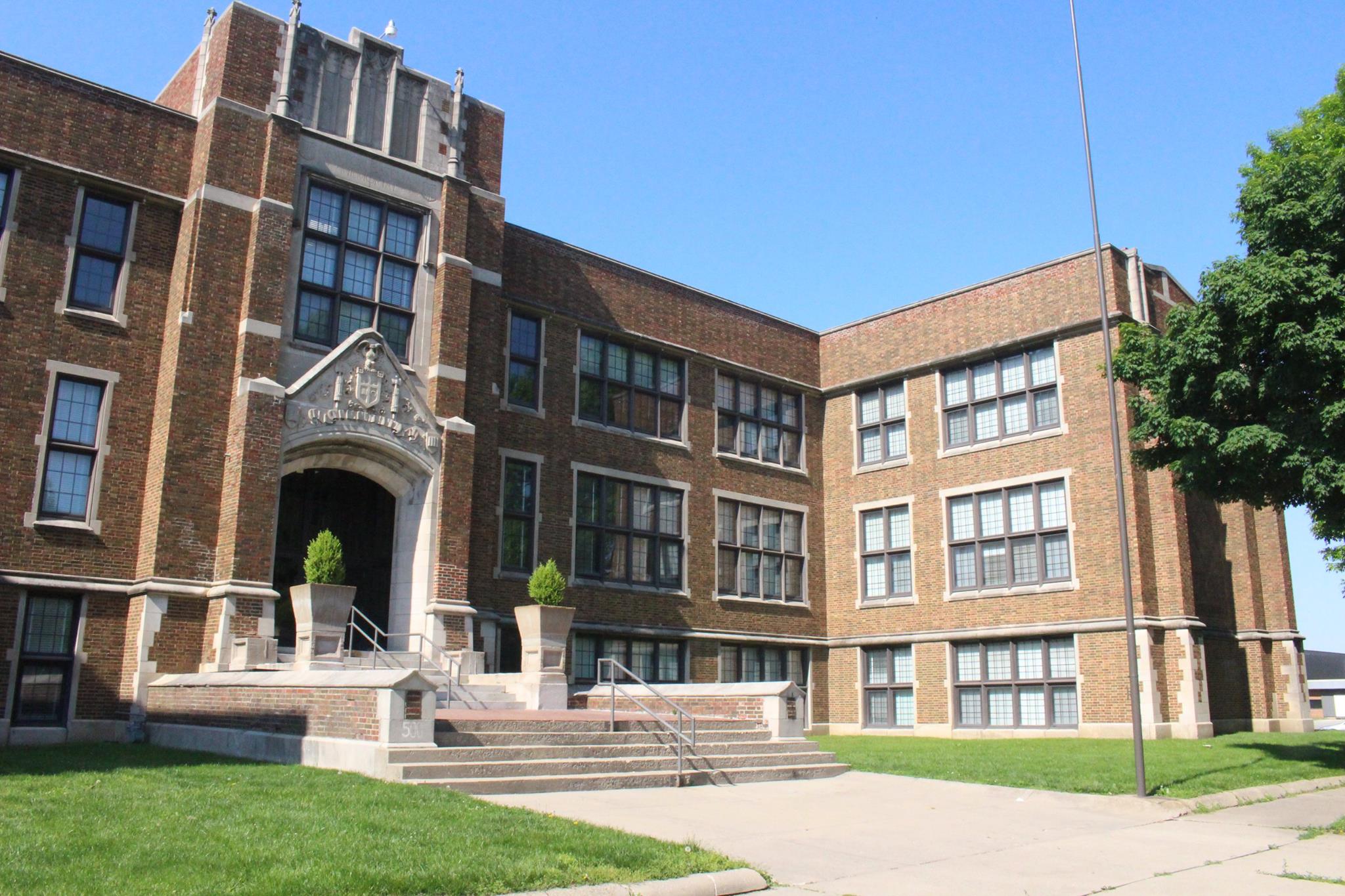 This is the Jacksonville High School and the Newton Bateman building. This the third school built in this location. The first was called West Jacksonville District School whose high school department was created by the efforts of Newton Bateman.  It was later demolished and replaced with the second high school which was built in 1900. The second high school burned down along with a church in 1918. After the burning of the second high school, the third was built in 1920. The building was named after the man who was the superintendent of Illinois public instruction and principal of West Jacksonville District, which is considered the first high school in Illinois. Newton Bateman was born in Bridgeton, New Jersey and moved to west with his family to pursue a better life. The Bateman’s settled in Illinois and Bateman took up jobs, such as cutting down trees, to help his father and to pay for his own education at Illinois College. At Illinois College, Bateman was well respected and even taught his own Latin class while attending. After graduating, Bateman received an anonyms donation which he used to start a private school in St. Louis, Missouri. After creating the school, he became a mathematics professor at the University of Missouri. When the West Jacksonville District opened its first public school, they offered Newton Bateman the job and he became the principal of the high school. Bateman’s house, on the same street as the high school, is now a part of the Looking for Lincoln exhibits. With Bateman’s help Jacksonville was considered the best area for education in Illinois and even earned the nickname “Athens of the West.”

This building was a part of District 117. During this time the district was annexing other districts all around Jacksonville including South Jacksonville, Murrayville, Woodson, and Lynnville. The building was finished on September 17, 1920 and was running until June 2, 1982.

So many major events for America happened during the 62-year period of the high school such as WWII and the Korean and Vietnam Wars. This high school has so much history within its walls.

The high school had students that dropped out or were forced to drop out after a year or two so that they could go serve their country in WWII. The ones that weren’t old enough to fight stayed back but sometimes they too dropped out to help their families with the farms since most of the men left. Unfortunately, some of the school’s WWII veterans lost their life overseas such as Bobby Whitlock and Robert Nunes. The school also had veterans of the Korean and Vietnam wars. Along with the veterans, the school has also produced professional athletes. The school graduated athletes that played in the NFL and MLB. The most popular of all graduates was a professional boxer named Ken Norton. Ken Norton was famous for his boxing career where he broke Muhammad Ali’s jaw and gave him 1 of his 5 career losses. Also, Norton is responsible for limiting track athletes in high school to 4 events. Norton once competed in 8 eights and got first in 7 of them. From that meet the “Ken Norton Rule” was created. From war heroes to professional athletes the school has educated many great people who make Jacksonville proud.

This building during the late 1970s was starting to become unsafe for the students. For example, during the May finals of 1977 a piece of the ceiling fell down onto a student’s head causing him to be taken to the hospital for stitches. This incident helped the board of education decide it was time to relocate, so the last class to graduate from this building was in June of 1982. After the closing of the high school the building was put into the use of school apartments and is still serving the community today.

“Jacksonville, IL: The “Athens of the West””. Vision117. 10 October 2016. Vison117.com/Jacksonville-proud-educational-history.html.