The WallDog Murals are a set of ten paintings done at different locations around downtown Jacksonville, Illinois. These murals all depict different historical events that took place in Jacksonville. The murals are located on sides of buildings on and around the downtown square. The location listed here can be considered a starting place for the murals, because it is the Welcome to Jacksonville Mural.

Artist worked day and night to get the murals done in one week. 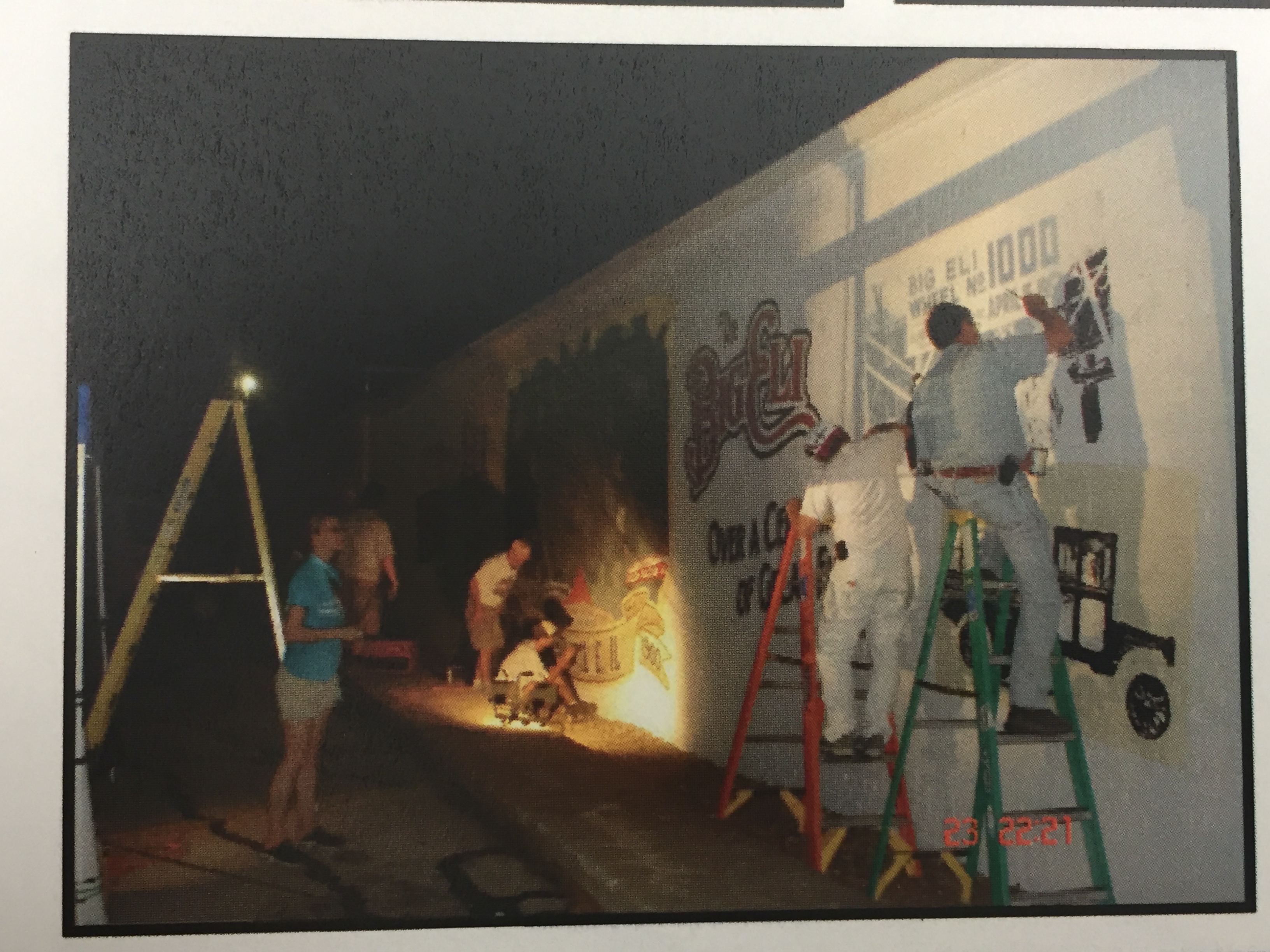 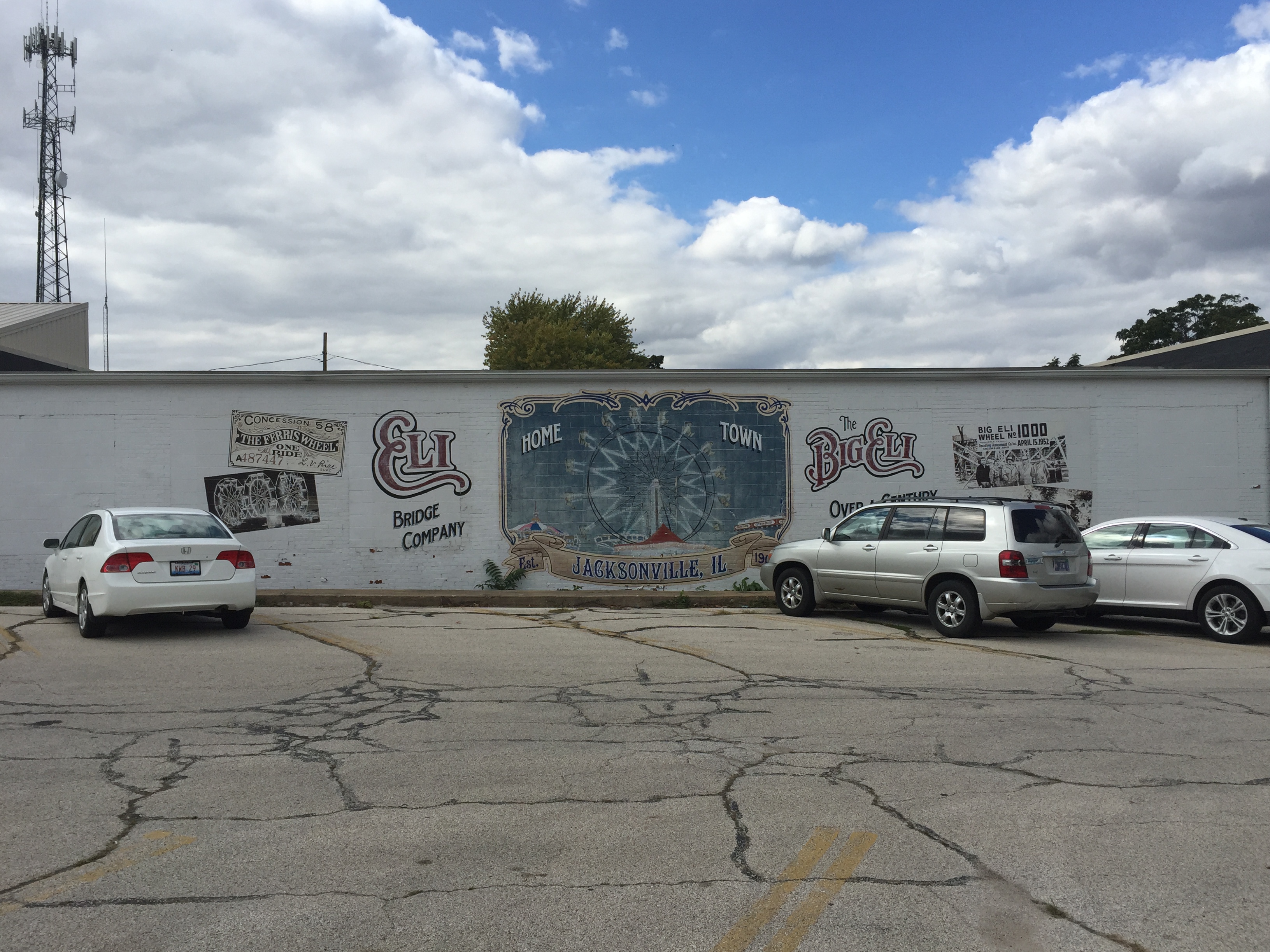 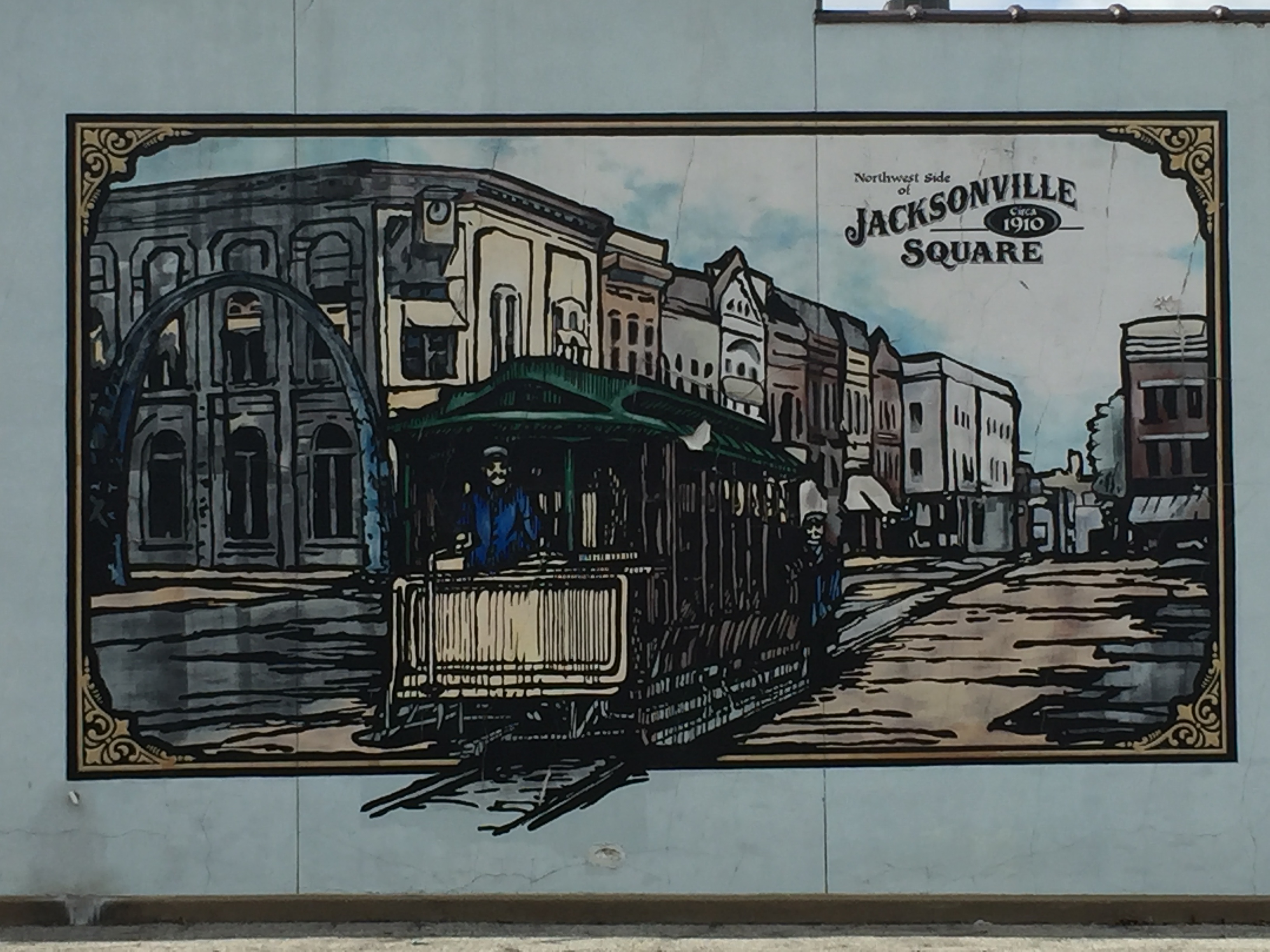 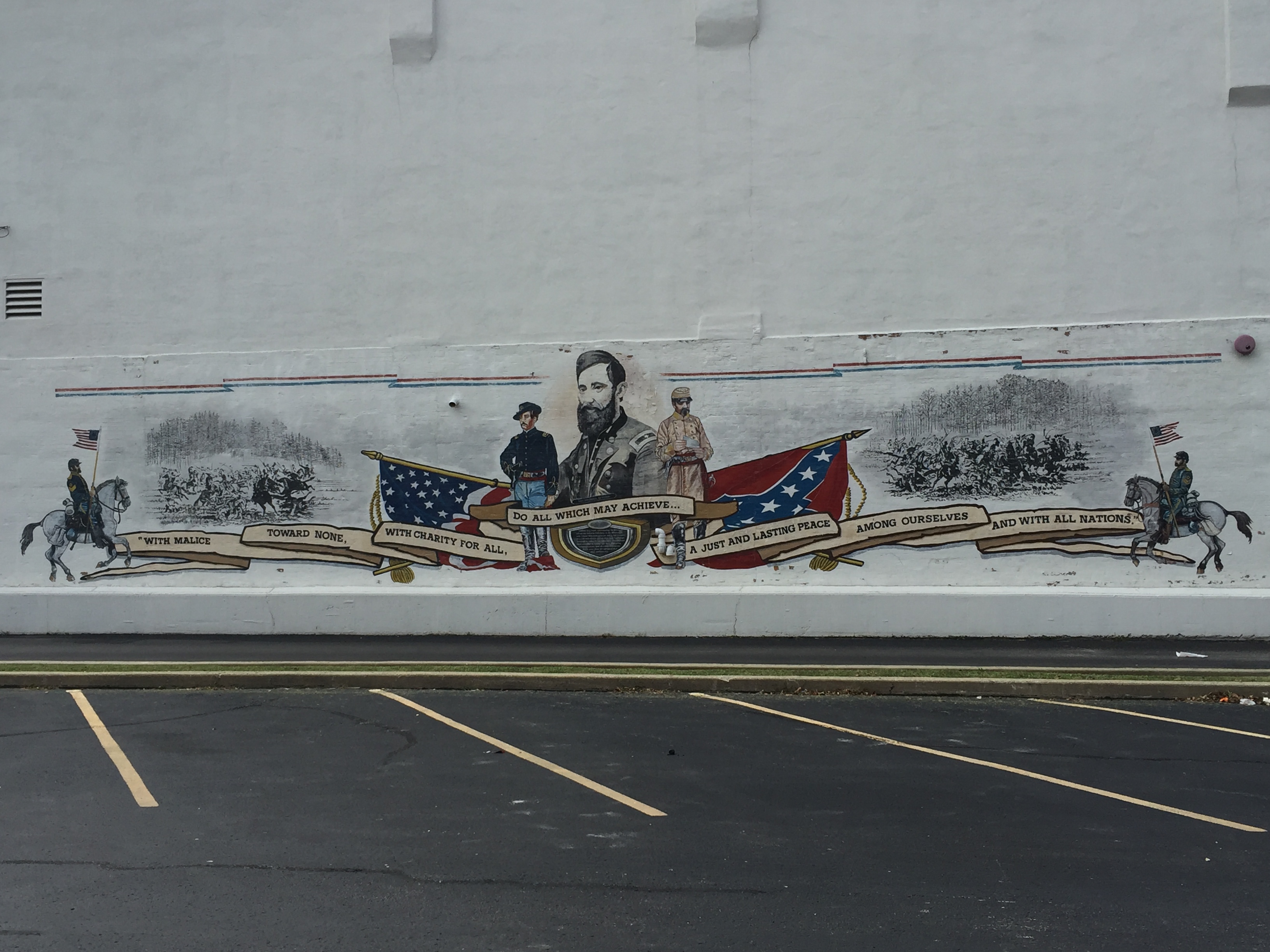 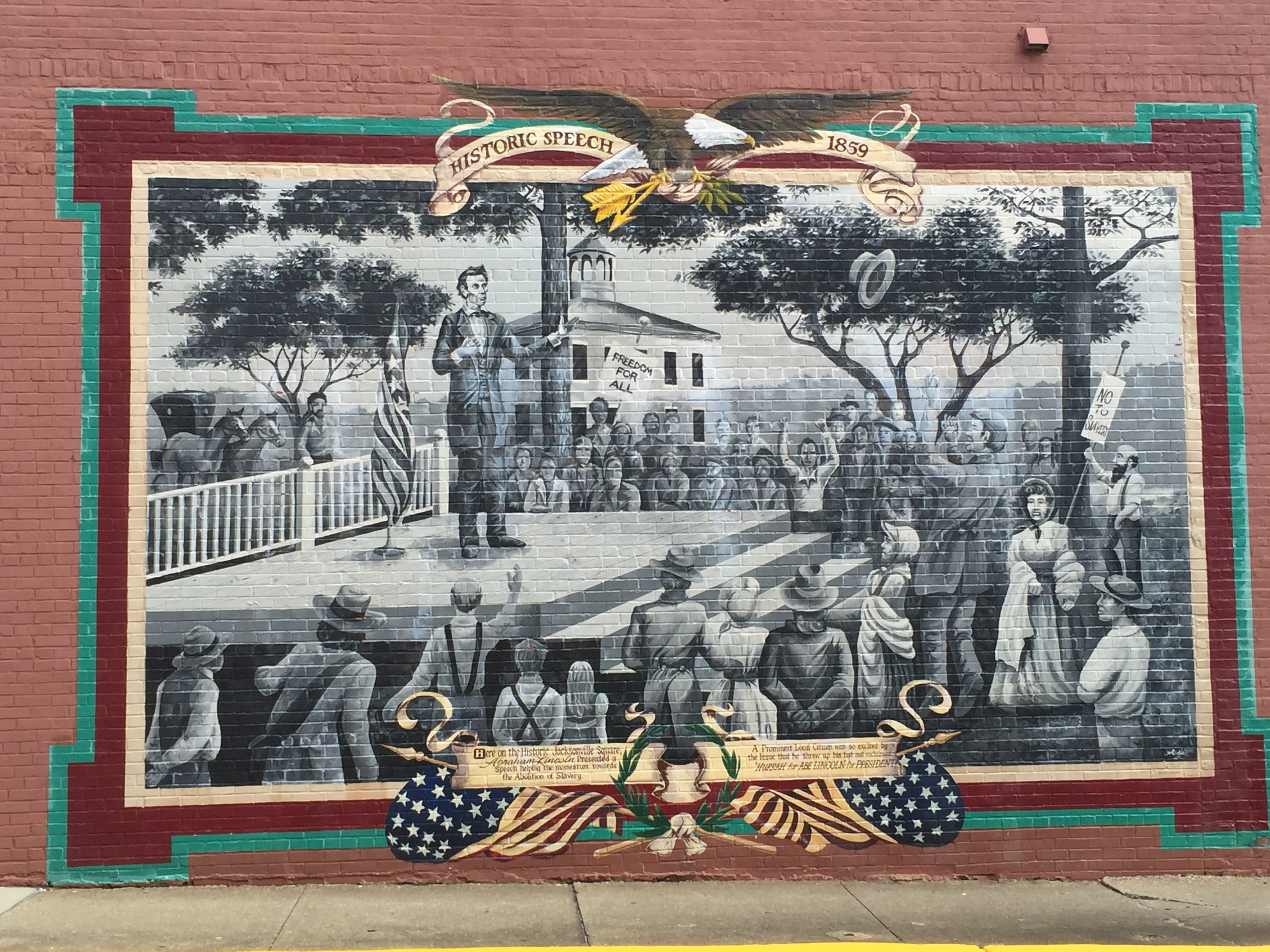 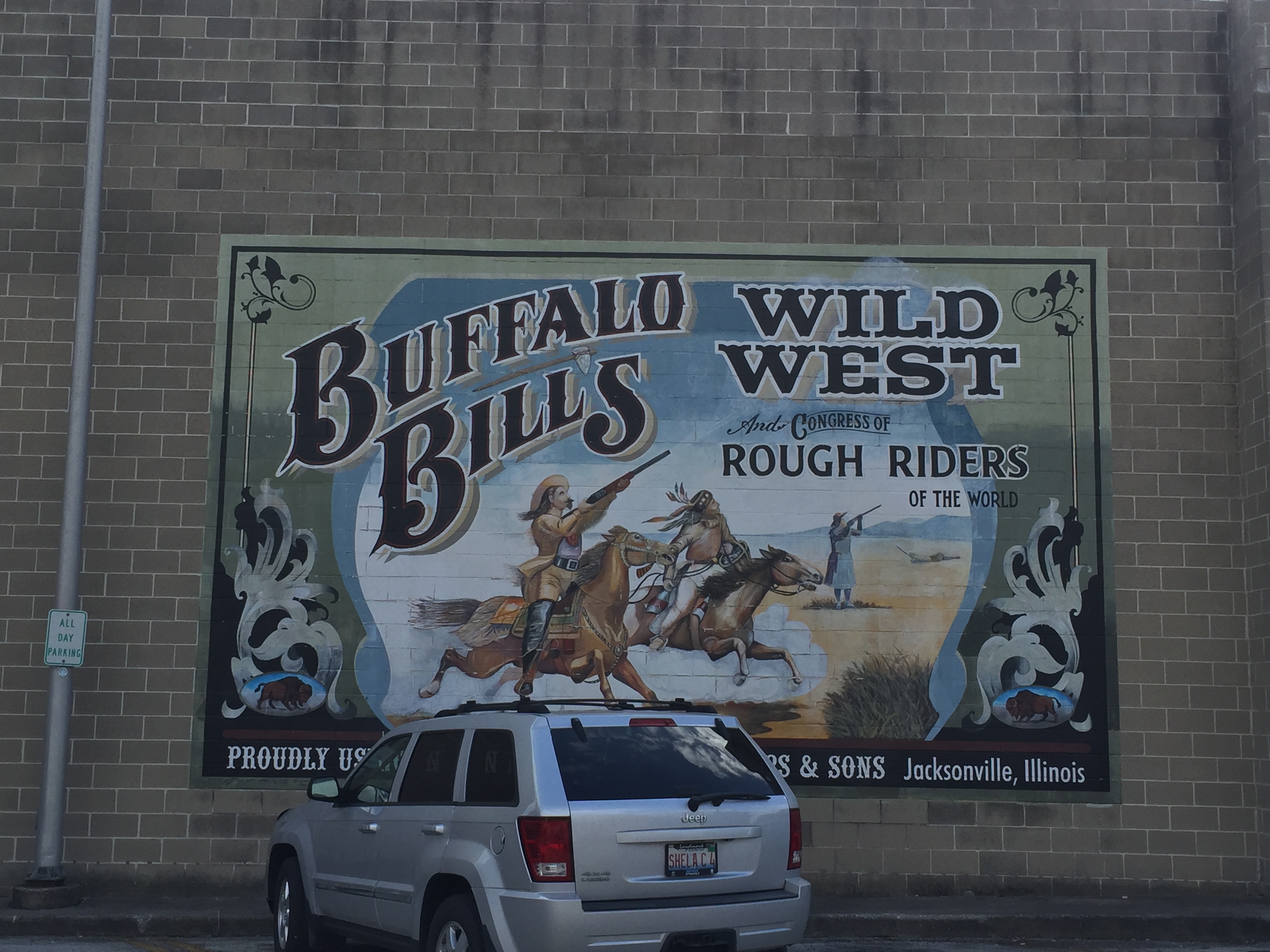 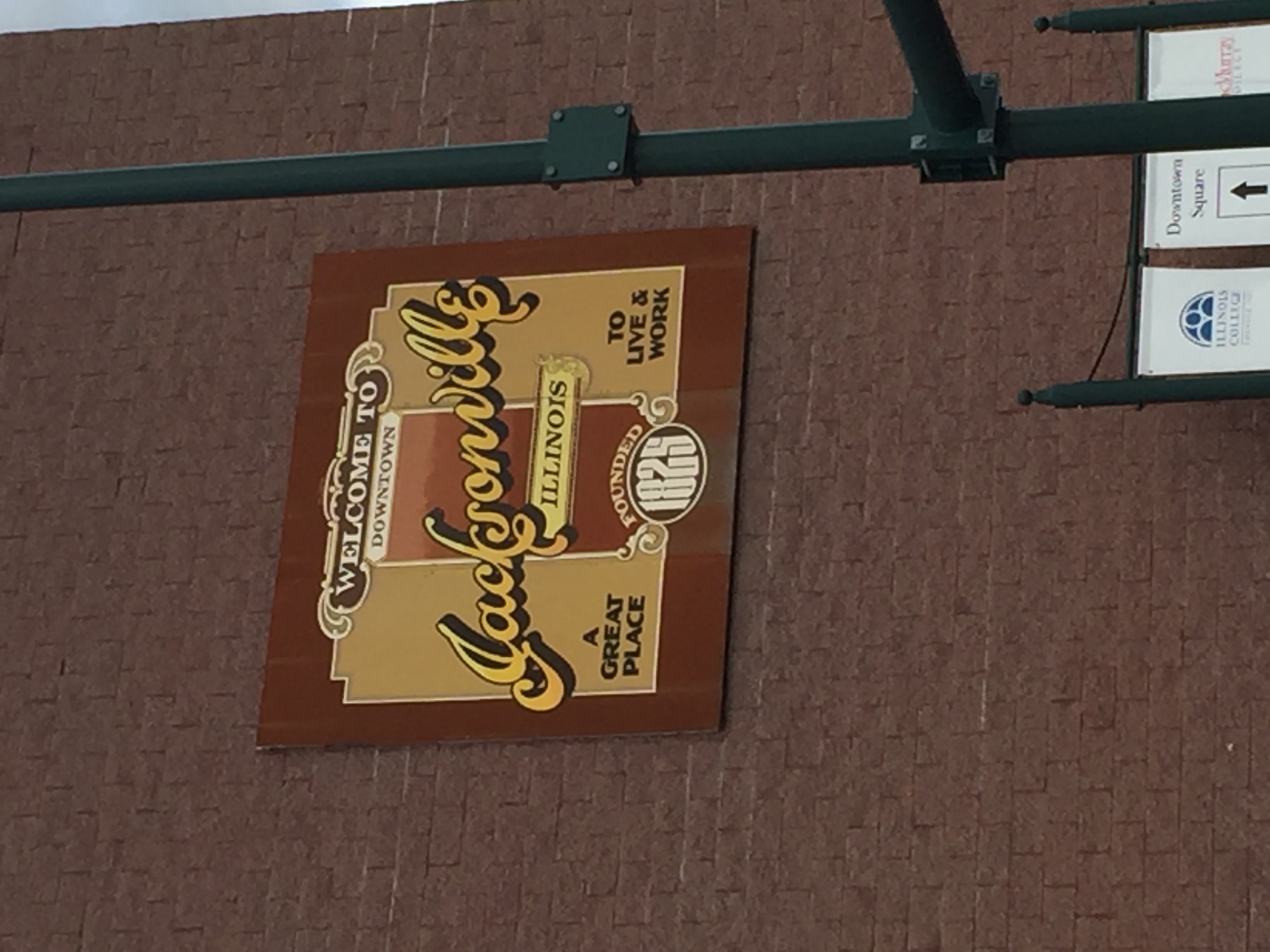 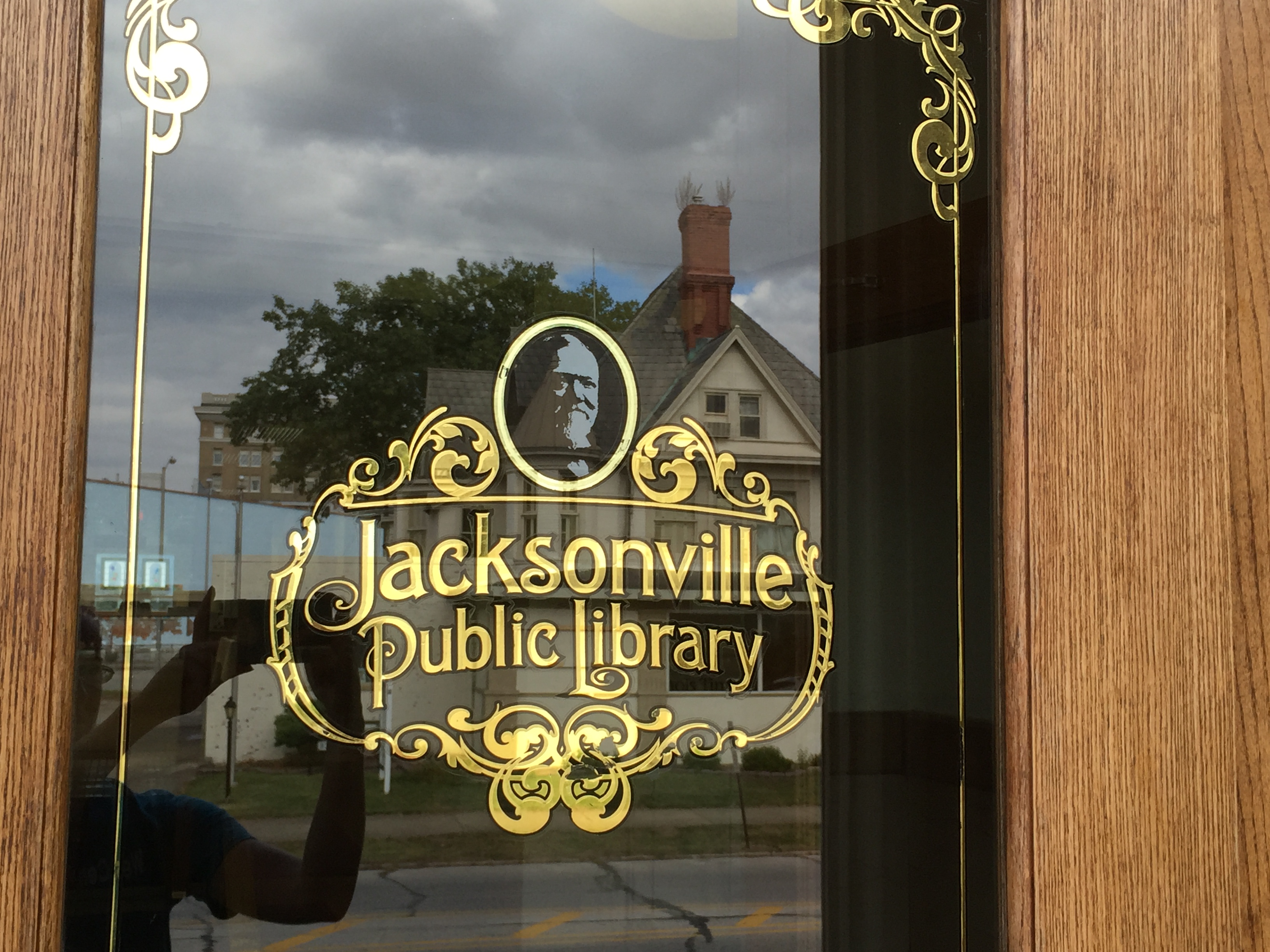 2 of the 3 DX Service Station Murals. 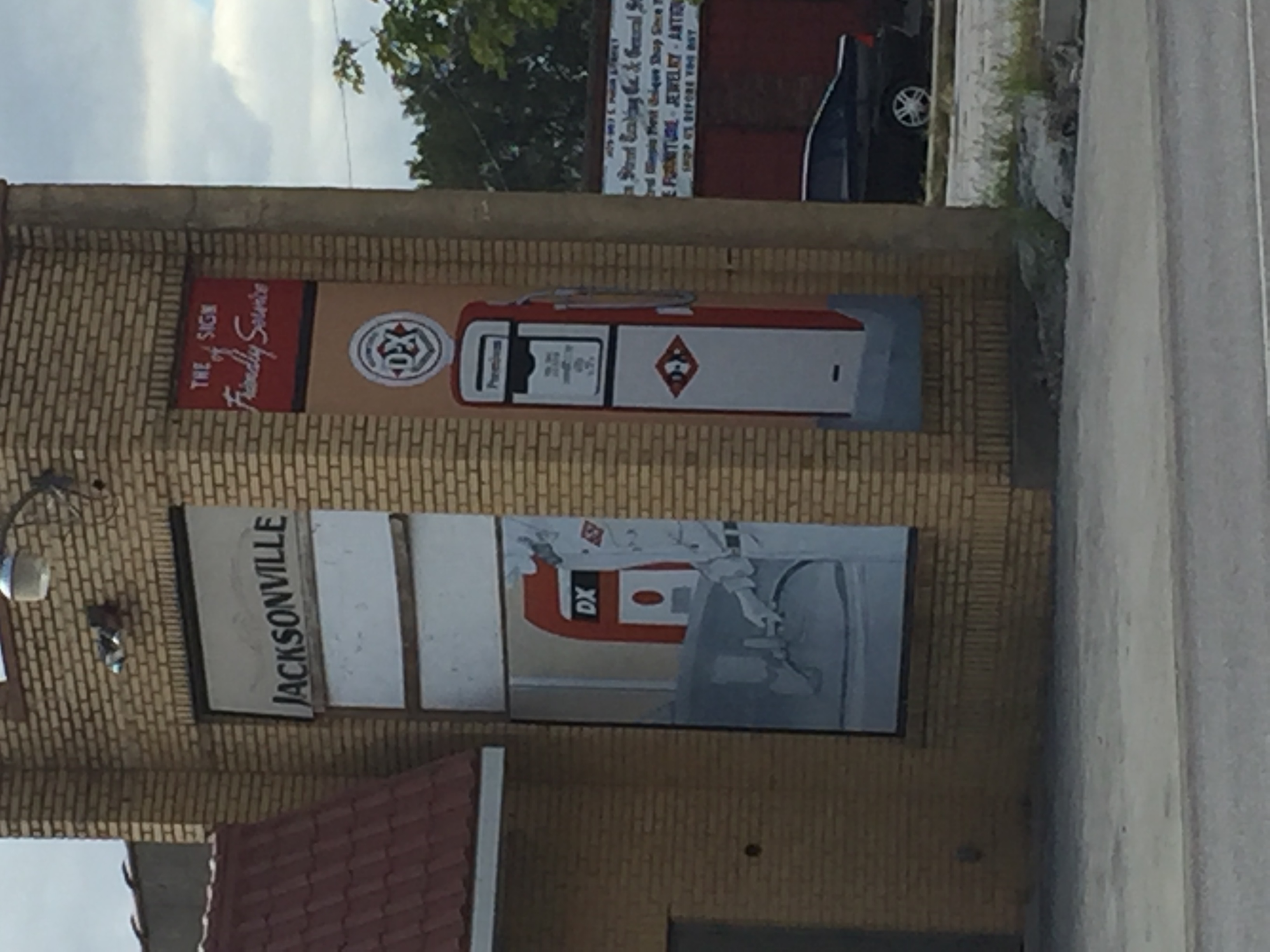 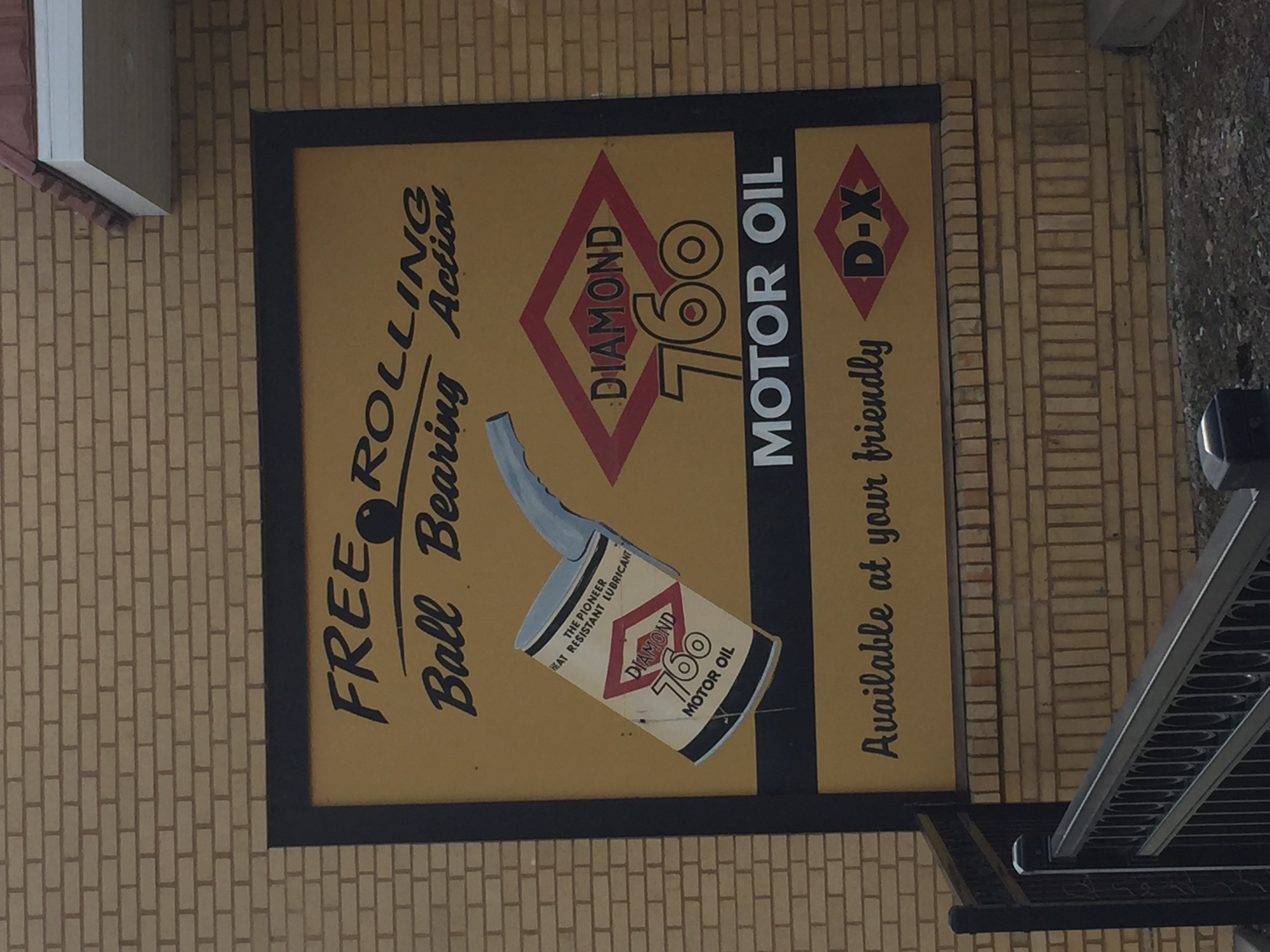 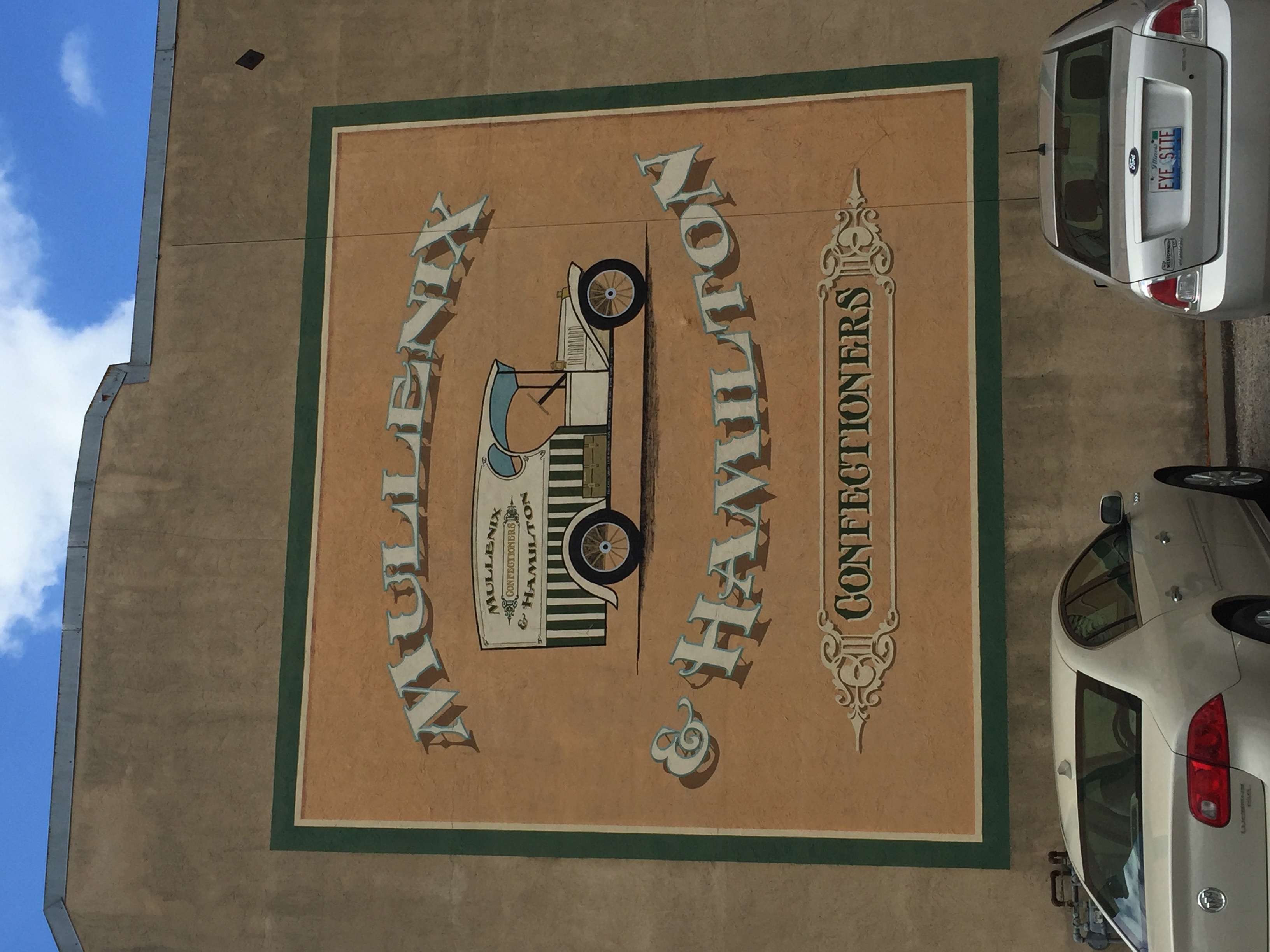 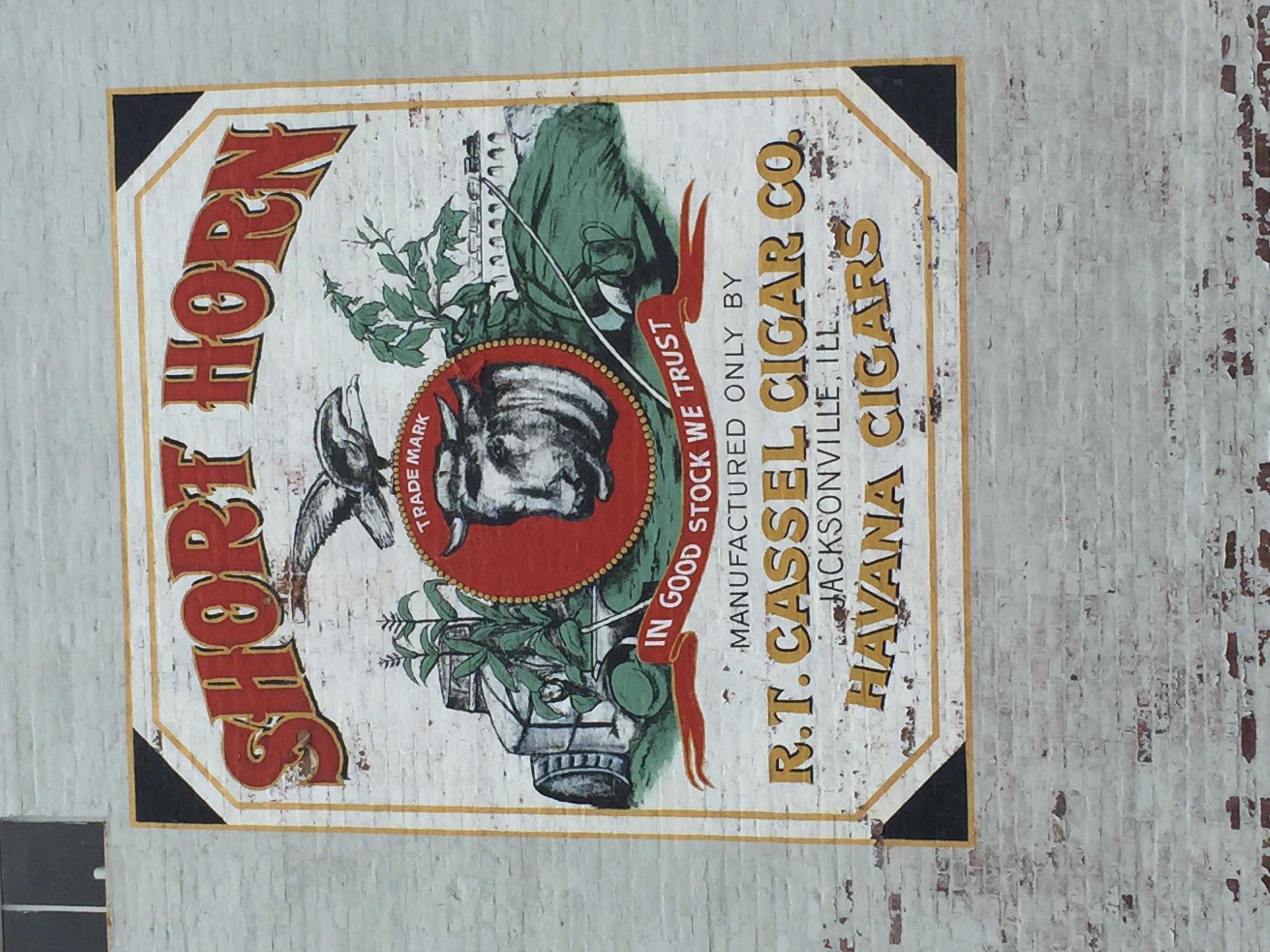 The WallDog Murals are a set of ten paintings done at different locations in downtown Jacksonville, Illinois. They were all painted from June 22 to June 25, 2006 by a group of artist and sign painters called the WallDogs. The WallDogs meet in towns all over the world to create murals for towns. The ten murals in Jacksonville were painted by 52 artists, some of whom came from as far away as Ireland, Australia, New Zealand, and Scotland. Each mural had their own team and team leader. The team leader came up with the design and the entire team worked on it during the week.

The ten Jacksonville murals are all heritage based and they each tell a different part of Jacksonville's history.

The first mural is of the Eli Bridge Company. William E. Sullivan began building portable Ferris Wheels in 1900 and the first "Big Eli Wheel" debuted in Central Park in Jacksonville in May of 1900. The company still invents rides today.

The second mural is of the west-side of the square in 1910. At the turn of the century, Jacksonville was referred to as "The Elm City" due to one citizen who wanted to spruce up the town.  The charm of this town was also due to the vast amount of different churches in the area.  Citizens felt at ease in their little town.

The third mural is of General Benjamin Grierson. General Grierson is best known for being the leader of the 600-mile Union cavalry raid through the Confederacy in the spring of 1863. Grierson died in 1911 and is now buried in the Jacksonville East cemetery.

The forth mural is of Abraham Lincoln giving an anti-slavery speech in Jacksonville. Between the 1830s and 1850s Lincoln handled many legal cases in Morgan County so him being is Jacksonville is no surprise. Although the date of the speech is unknown it was given sometime prior to the Civil War and Lincoln's presidency. Lincoln gave the speech at the the Courthouse Park which is now known as Central Park Plaza.

The fifth mural is of Buffalo Bill. Buffalo Bill Cody earned his name from working on the Pacific Kansas Railroad.  He took a break from that to join in the Civil War.  It was there he got his claim to stardom.  He took on acting (as Buffalo Bill) and was the living embodiment of the American frontier.

The sixth mural is a welcome to Jacksonville mural and shows people how long Jacksonville has been here. Jacksonville was established in 1825 and even then the square was a big part of the town. Throughout history downtown has housed city and county offices, businesses and restaurants.

The eighth mural is three separate pictures that depict advertising imagery from the DX stations. The southwest corner of South Main St. and West College Ave. (where this mural is located) was once home to many gasoline service stations. Following Word War II, DX service stations occupied the space for about 15 years. In the early 1960s Phillip Morris opened a liquor store in the location.

The ninth mural is of a local business, Hamilton's. Hamilton's was opened by Robert Mullenix and Lloyd Hamilton in 1913. It opened as a confectionery on East State Street. As time went on Hamilton's grew into a full service restaurant for downtown Jacksonville. Mr. Hamilton's son, George A. Sr. decided to close the restaurant in the early 1970s and focus on catering. Today Hamilton's is a thriving catering business and they also have a banquet hall right off the square.

The tenth and final mural is of the Short Horn Cigar. In the late 1800s and early 1900s cigar making flourished in Jacksonville. By 1905 Jacksonville had 13 factories, 130 employees, and 200,000 cigars produced weekly. (Jacksonville Main Street) The mural is a replica of an early 20th century cigar box label of the Cassel brand.

Daytime-the murals are all outside and would be hard to see at night.