William Clarke Quantrill (1837-1865) was a Confederate guerrilla raider who has been referred to as the “bloodiest man in American History”. He is most known for the Lawrence Massacre (August 21, 1863) where he and 450 followers raided Lawrence, Kansas, and killed over 150 men and boys, as well as looting and burning the town. Quantrill was buried in two other locations before some of his remains were laid to rest on October 30, 1992, in his Ohio hometown at the Dover Fourth Street Cemetery . 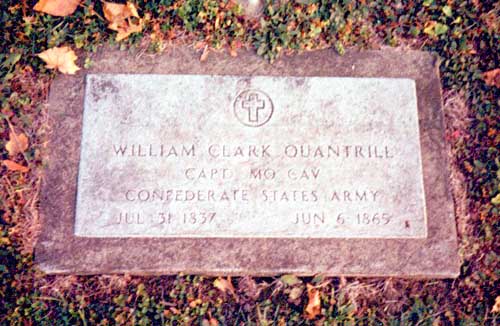 William Clarke Quantrill was born on July 31, 1837, in Canal Dover, Ohio. Quantrill, whose father Thomas Henry served as the principal of the Canal Dover Union School, became a schoolteacher. He left home in 1855, and moved around the Midwest the next several years seeking teaching appointments at a time in which public education was a growing field. He then moved to the Kansas-Missouri area, where he participated in multiple incidents of border violence. Quantrill joined other Confederate guerillas, also known as bushwhackers, and soon became a prominent leader. As a Confederate supporter, Quantrill came to be known as “the most notorious and enigmatic wartime guerilla”. To gain support in his efforts, Quantrill often created mythologies involving his background, his views on slavery, and his support of the Confederacy.

One of the most well-known attacks led by Quantrill was the Lawrence Massacre, also known as Quantrill’s Raid. In August 1863, Quantrill led 450 men into Lawrence, Kansas, where they killed over 150 men and boys and then burned the town. Quantrill continued to lead bushwhackers in Kansas, Missouri, and Kentucky during the last two years of the Civil War. On May 10, 1865, he was wounded by Union soldiers. He died of the mortal gunshot on June 6, 1865, at a Kentucky military prison.

Quantrill wished to be buried in St. Mary’s Cemetery (now St. John’s) in Louisville, Kentucky. However, the priest who administered the last rites took his remains to an unmarked grave at a church member’s home.  Years later, Quantrill's childhood friend, William W. Scott, located the body for Quantrill’s concerned mother, Caroline, who wished to bury her son in Canal Dover. In 1888, they brought Quantrill’s bones home for reburial, which was met with reluctance from Dover Canal authorities. The grave stayed unmarked until 1982, when a government-issue veteran’s marker was placed there.  Unknown to Caroline Quantrill, upon exhumation, Scott had retained some of Quantrill’s remains, including his skull, in an attempt to sell them.

The bones kept by Scott, with the exception of Quantrill’s skull, passed through several hands, eventually ending up at the Kansas Historical Society. The bones were later buried by the Division of Sons of Confederate Veterans in Higginsville, Missouri. The skull was given to Scott’s son, who allowed a Dover fraternity to use it as a relic. It was turned over to the Dover Historical Society in 1972. Before reburial at the Fourth Street Cemetery in 1992, a wax replica was made by the Kent State Anthropology Department. The wax skull is currently on display at the Dover Historical Society.