This is the site where Jose Cisneros' daughter, Christine, attended elementary school. In 6th grade, Christine told Cisneros about the poor condition Prescott was in. There were worn down bathrooms, old curriculum, and not enough teachers compared to the number of students. When Cisneros spoke to CCISD Board members about getting more funding and equipment, he was shot down. He and other parents of Prescott students joined together and filed the lawsuit against CCISD, supported by the United Steelworkers Union.

Jose Cisneros began the case against CCISD with the help of the United Steelworkers Union. 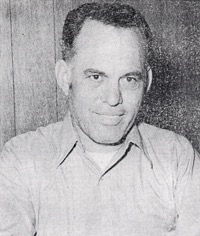 This is where Prescott Elementary School used to be located. It was recently torn down and replaced by Garcia Elementary. 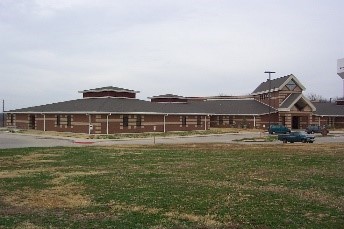 This was part of an article in the Corpus Christi Caller Times that showed how many students of each ethnicity were in each school. 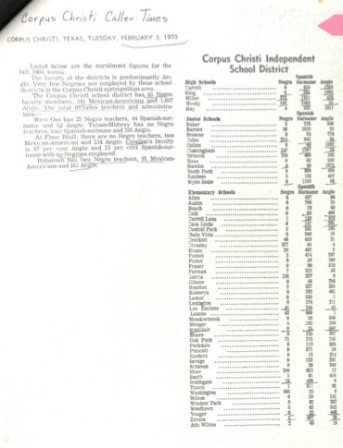 Data showing that the CCISD staff were separated by race. 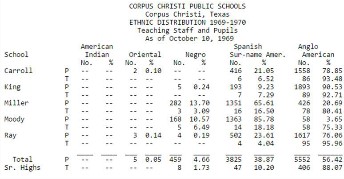 The Brown v. Board case in 1954 ruled that segregating students based on racial bias was unconstitutional. Since Mexican-Americans were legally considered white, many schools would put Mexican-American and African American students together so that the courts would consider them integrated. Many activists were empowered by the victory of the Brown v. Board and wanted to fight against their unjust systems. Jose Cisneros and others in the United Steelworkers Union joined together in 1968, and filed a class-action lawsuit against the Corpus Christi Independent School District. They argued that the school board discriminated against Mexican-American and African American students forcing them to go to schools separate from Anglos.

Jose Cisneros was displeased when his daughter went into the sixth grade and told him about how bad the conditions were in the school. When he discussed it among other parents, they agreed on the matter. Cisneros and 25 other Mexican-American and African American families filed the case against CCISD on July 22, 1968. They argued that the primarily white schools received better equipment and more funding than schools that were primarily Mexican American and African American.

The courts ruled in favor of Cisneros, and ordered the school district to create a unitary, desegregated school system. CCISD was able to delay desegregation multiple times. The original solution decided upon by the court was forced busing. When the plaintiffs and defendants of the case agreed that busing wasn't working, the court switched to allowing majority-to-minority transfers and creating special emphasis schools and programs. Busing used a computer-generated list of randomly-selected students and transferred them to a school where their ethnicity was the minority. Majority-to-minority transfers allowed a student could choose transfer to a school where they were the racial minority. Special emphasis schools took had a majority of low-scoring students and provided special programs designed to better educate them. At the end of the case, both parties agreed that the majority-to-minority transfers and the special emphasis schools were good for the students and successful in desegregation.

Overall, the case was one of the most important cases in Mexican American history: it was the first case to apply the Brown v. Board ruling to Mexican-Americans. The case recognized them as a minority group that was segregated and discriminated against. Cisneros and the others fought for the right of students to get their fair education. It took place during the Civil Rights Movement, when many others were fighting for their equality.