Cotten Hall, a student’s dormitory on the campus of East Carolina University, was built in 1925 and opened one year later. It is named for the writer, poet and community leader Sallie Southall Cotten. She was born in Virginia in 1846 and moved to North Carolina as a young woman for her education. In 1866, she married the Confederate Army veteran Robert Randolph Cotten. He later bought two plantations in Pitt County, where the couple lived for many years. After a mainly domestic life for almost thirty years, Sally Cotten was chosen by the governor of North Carolina to represent the state at the World’s Columbian Exposition, in Chicago in 1893. Inspired by this experience, Cotten dedicated her life to the clubwomen movement upon her return. She became an advocate for women’s education and social change. Sallie was president of the North Carolina Federation of Women's Clubs. Cotten was one of the founders of the End Of The Century Book Club in 1899. This organization later founded Sheppard Memorial Library in Greenville. 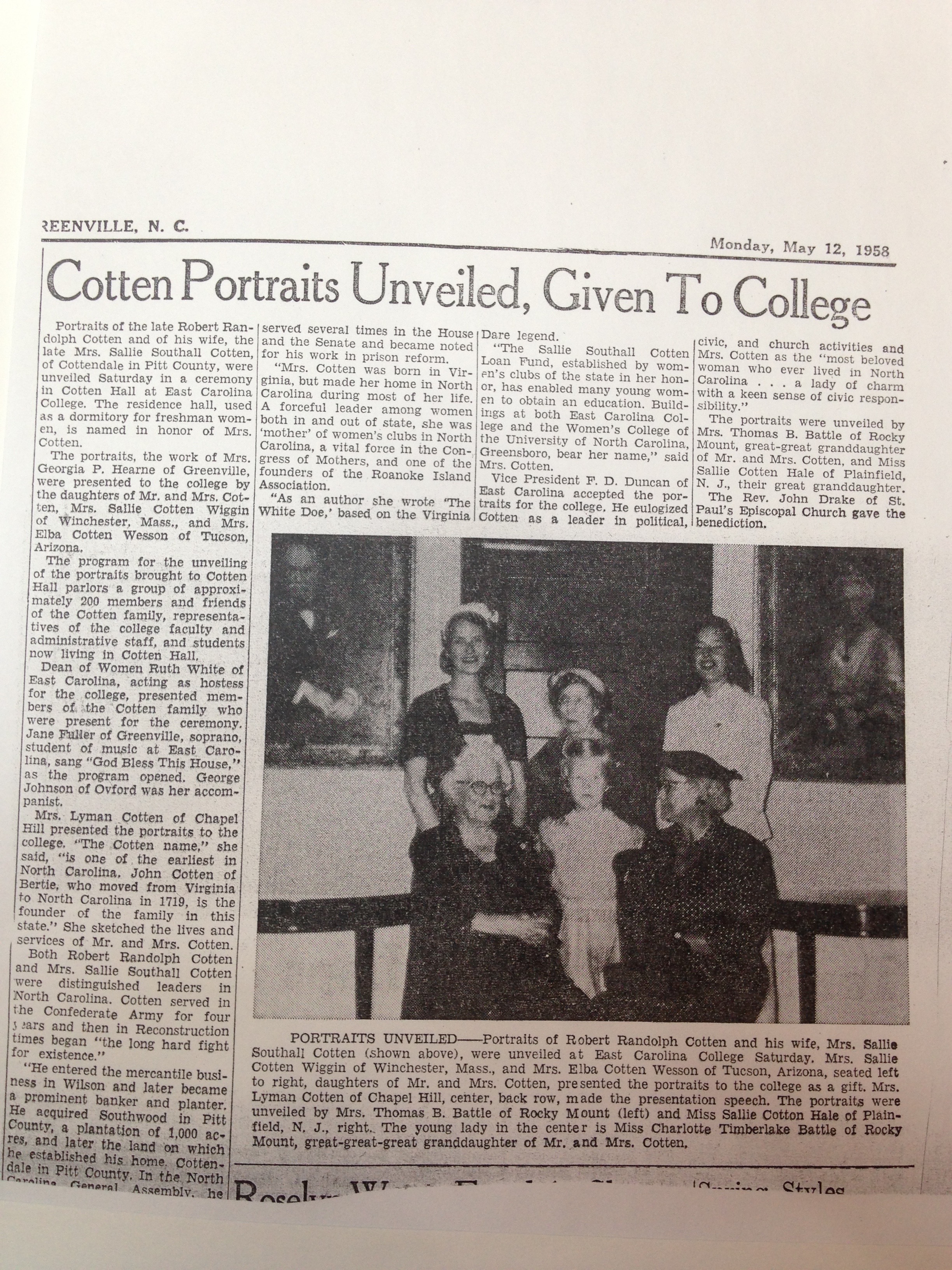 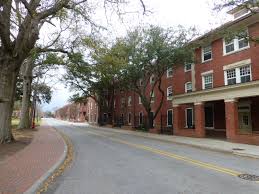 Sallie Southall Cotten was born in Virginia in 1846. As a young girl, she moved to North Carolina,  where she received an education from Wesleyan Female College and later Greensboro Female College, graduating in 1863. She worked as a schoolteacher for several years until she married Robert Randolph Cotten in 1866. He served in the Confederate Army during the Civil War. They first lived in Tarboro, where Robert Cotten owned a business, later they moved to Wilson. Finally, Robert Cotten bought two plantations in Pitt County, Southwood and Cottendale, where the couple spent the most part of their lives.7 Robert Cotten was an influential community leader at the time. He was a member of the General Assembly and a proponent of the idea to place ECTTS in Greenville.4 His wife Sallie on the other hand spent almost three decades of her life primarily as a housewife.7 In 1893 however, Sallie Cotten was appointed by Governor Elias Carr to  represent North Carolina at the World’s Columbian Exposition in Chicago, an experience which left a permanent impression on her.1

In Chicago, she met educated women from all parts of the country.7 She was impressed by the impact of their commitment on society. When she returned to Greenville, she dedicated her life to the clubwomen movement and was very active among the reformers during the Progressive Era. She supported social reform and became an advocate and supporter of women’s education and social improvement.1 She was a member of the North Carolina Federation of Women's Clubs for many years and functioned as its fifth president. The federation supported local civic reform and the child labor reform, created a loan fund for girls (the Sallie Southall Cotten Loan Fund) and promoted education.6 In addition, Cotten was the secretary in of the National Congress of Mothers for several years and a member of numerous other clubs, such as the United Daughters of the Confederacy, the King's Daughters, and the  Pitt County Federation.7 Further, Sallie Cotten was among the founders of the End of the Century Book Club, which was organized in 1899. The club was supporting civic improvements and played a crucial role in the founding of the Sheppard Memorial Library in Greenville.5 Although she was a noted social reformer, Cotten agreed with white supremacist ideas, which were prevalent among whites at the time.1

Besides her political involvement, Sallie Cotten wrote several books and poems during her life. Among others,she authored the book The White Doe; the fate of Virginia Dare; an Indian legend, published in 1901 and What Aunt Dorcas Told Little Elsie, published in 1923.1

After her husband died, Sallie Cotten moved to Massachusetts, where she died in 1929. She was buried in Greenville.7

Cotten Hall on East Carolina Campus was named in her honor. A dormitory at at the University of North Carolina in Greensboro also bears her name. Several scholarships for women were dedicated in her memory.2 Cotten Hall at East Carolina, also called Dormitory B, was constructed in 1925 at a cost of $203,750. The architect  H.A. Underwood from Raleigh, North Carolina designed the structure.4 Cotten Hall was originally built as a women’s dormitory. It opened in 1926 next to Fleming Hall in the central neighborhood.3 As the original dormitories, Cotten Hall was built in the Spanish-mission architectural style. ECTTS founder Thomas J. Jarvis,spent time in Brazil, acquiring a taste for that design. Cotten Hall was renovated three times, in 1950, 1963 and 1985.4

In 1958, a ceremony took place in Cotten Hall, where the portraits of Sallie Cotten and her husband Robert Randolph Cotten were unveiled by two of their daughters, Mrs. Sallie Cotten Wiggin and Mrs. Elba Cotten Wesson.

At a 1958 ceremony at Cotten Hall, portraits of Sallie and Robert Cotten were unveiled by two of the couples daughters, Mrs. Sallie Cotten Wiggin and Mrs. Elba Cotten Wesson. Around 200 people attended the ceremony, as the Vice President of East Carolina, at the time, pointed out the leadership and achievements of the couple for the community.6

3Buildings Upon the Past. Accessed November, 10, 2016. https://digital.lib.ecu.edu/buildingtour/