The Immaculata Seminary, opened in 1905, was once a select school for girls enrolled in elementary, secondary, and postgraduate programs. Though the seminary permanently closed in the 1970s, elements of the former school have been incorporated into Tenley Campus, a satellite campus of American University. In 2013, the Regina, Marian, and Loretta halls were demolished, but the original Immaculata building (built 1904, with a 1919 addition) and Dunblane Hall (built c. 1839) remain. The extant structures are part of the Immaculata Historic District. 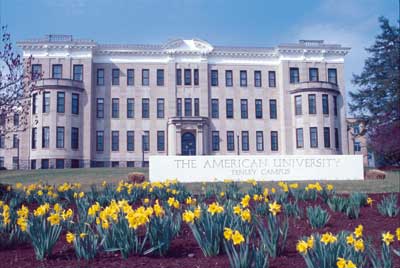 The Immaculata Seminary is a former girls school and contributing property to the Immaculata Historic District. The school's history began in 1902, when the pastor of St. Ann’s Church in Washington, D.C., asked the Sisters of Providence to teach in his parish school. With the urging of Cardinal Gibbons, the Sisters would purchase a nearby property and open a select school for girls. A four-story schoolhouse, named Immaculata Seminary, was constructed on the early nineteenth-century Dunblane estate.

The school opened its doors in 1905 to a class of eighteen pupils. As the school did not impose age limits, girls ranging from elementary to postgraduate programs were enrolled at Immaculata. In 1913, the elementary school relocated to Dunblane Hall at the west end of the campus. The land between the school and Dunblane served as a recreational play area for the girls. The secondary and postgraduate departments continued to share the original seminary building. By 1920, the postgraduate department had expanded and the seminary enlarged. Dunblane received a new wing on its south side in 1935. The chapel, still extant, was added in 1921.

Prior to 1957, Immaculata accepted resident students. Thus, additional structures were needed to accommodate the increase in high school enrollment. In 1955, the Marian Hall dormitory and classroom building, as well as the Loretta and Regina halls, were added. The high school was converted to a day-school only program in 1960, and Dunblane stopped admitting resident students the following year.

By 1965, three separate corporations operated on the campus: Immaculata College of Washington, Immaculata Preparatory School, and Immaculata-Dunblane Hall. The school's growth continued into the 1970s. A Montessori School, run by the Sisters of Providence, rented rooms in Marian Hall from 1971 to 1976. Dunblane was renovated and expanded in 1974. The college, however, was undergoing severe financial difficulties and closed in 1978. American University, which had been leasing Marian Hall, purchased the entire property in 1986.

In 2013, the Regina, Marian, and Loretta halls were demolished to make room for the Washington School of Law, but the original 1905 schoolhouse and Dunblane Hall remain as protected properties. The existing structures, including the imposing 1904 Capital Hall (which faces Tenley Circle), are incorporated into Tenley Campus, a satellite campus of American University. Together with the 1921 chapel, the buildings serve as contributing properties to the Immaculata Historic District.