The history of the Intermountain Indian Schools is unique in the fact that they were all a part of a hospital before becoming a school. The hospital was named the Bushnell General Army Hospital. At the time, Bushnell was among the top five military hospitals in the world. It became no longer necessary and stopped housing patients around 1946. The buildings remained vacant until 1950 when the Intermountain Indian School was established. The school lasted for 34 years. Many of the buildings today are still standing. Others were torn down, and the land was used for small businesses and companies. 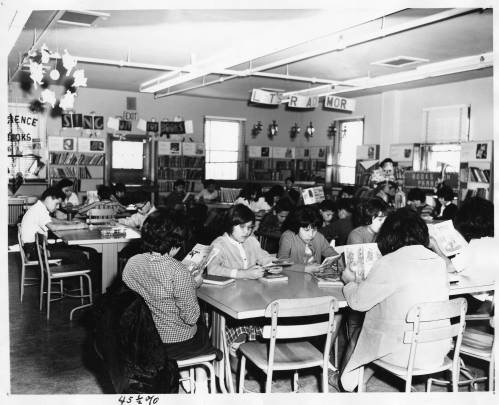 Intermountain Indian School was unique in the fact that it was once part of a hospital, named Bushnell General Army Hospital, before becoming a school. “In late January of 1942 the War Department attained 235 acres of property in south Brigham City Utah”[1]  to build the hospital. The federal government constructed 60 buildings at a cost of $9 million. “The 60-building facility stayed in operation until June of 1946. By the time its doors were closed, about 13,000 patients were treated there.”[2] It could hold up to 1,500 patients, all of whom were wounded during WWII. At the time, Bushnell was among the top five military hospitals in the world. The hospital's construction was “Perhaps the best news ever to be received in Brigham.”[3]

“The construction of the Bushnell Hospital affected Brigham City’s economy and lifestyle.”[4] Many local painters, carpenters, and townspeople were hired to help with the project. Many townspeople and local businesses also volunteered at the hospital. “The patients were primarily from Montana, Idaho, Utah, Nevada, and Arizona in keeping with the policy of locating patients as close to home as medically feasible so that families could visit.”[5]

“The Bushnell hospital was one of the  first medical facilities to use penicillin.”[6] Those working in the medical department specialized in orthopedic, neuro-psychiatric cases, and in tropical disease. The hospital also provided training for the medical doctors being sent to the European and Pacific war fronts.

The patients staying at the Bushnell were often entertained with movies, dances, live musical performances by amateur and professional entertainers, baseball games played by patients and staff, field trips, and swimming. This hospital was truly a great place for the WWII veterans to go and receive the medical treatment they needed. “Approximately 13,000 patients were treated during the hospital’s life of fewer than four years.”[7]

After the war, the hospital was no longer needed and stopped housing patients around 1946. “The Intermountain Indian school opened its doors in January 1950 to five hundred Navajo students,” soon becoming the “world's largest boarding school” and providing a better education for Navajo children.[8] “The conversion from a hospital to a school cost $4,250,000.”[9]  The Navajo boarding school was a great success and in the 1970s it was opened to all Indian students from any tribe rather than just the Navajos. This changed the name if the school to Intermountain Inter-Tribal School. The school closed May of 1984, ending a remarkable 34-year run. Many of the buildings today are still standing. “The properties were deeded back to Brigham City Corporation, and an 18-hole golf course was developed on the South Section.”[10]  Much of the land is now owned by businesses, while a few of the buildings remain with smaller stores in them.

[6] Bradford, Kathleen. Brigham City Historic Tour: A Survey of Brigham City's past through Its Historic Buildings

[9] Bradford, Kathleen. Brigham City Historic Tour: A Survey of Brigham City's past through Its Historic Buildings