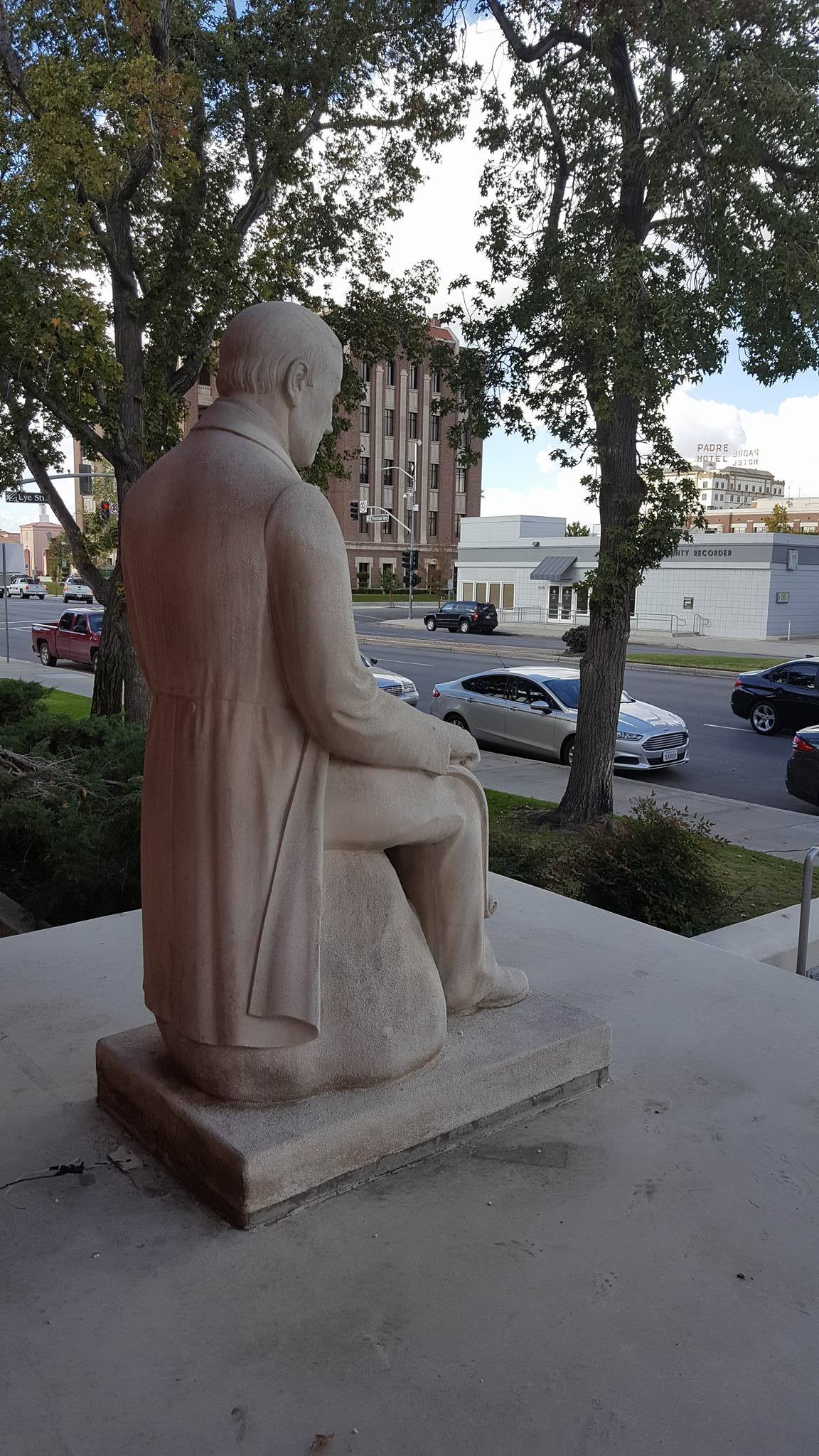 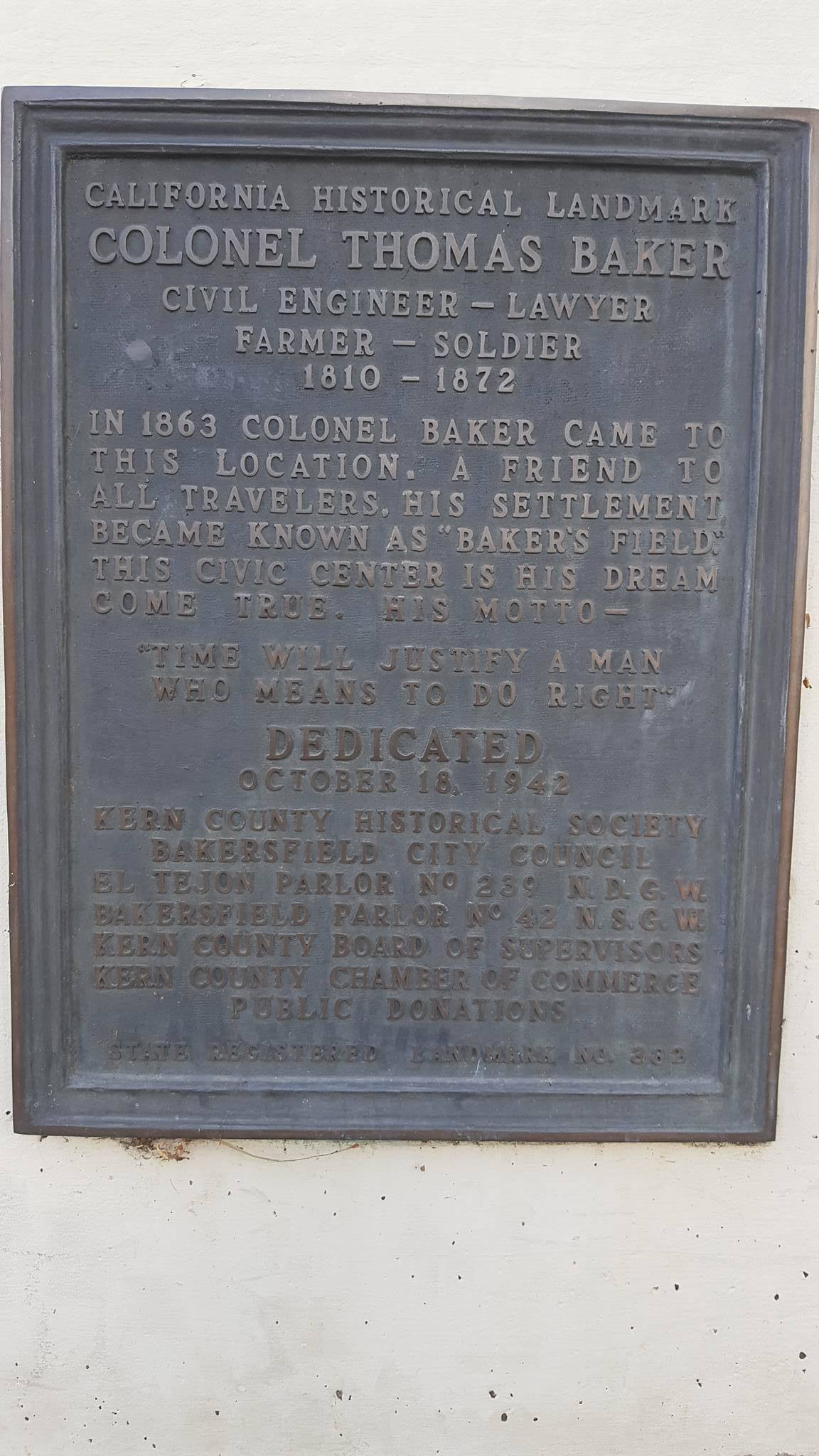 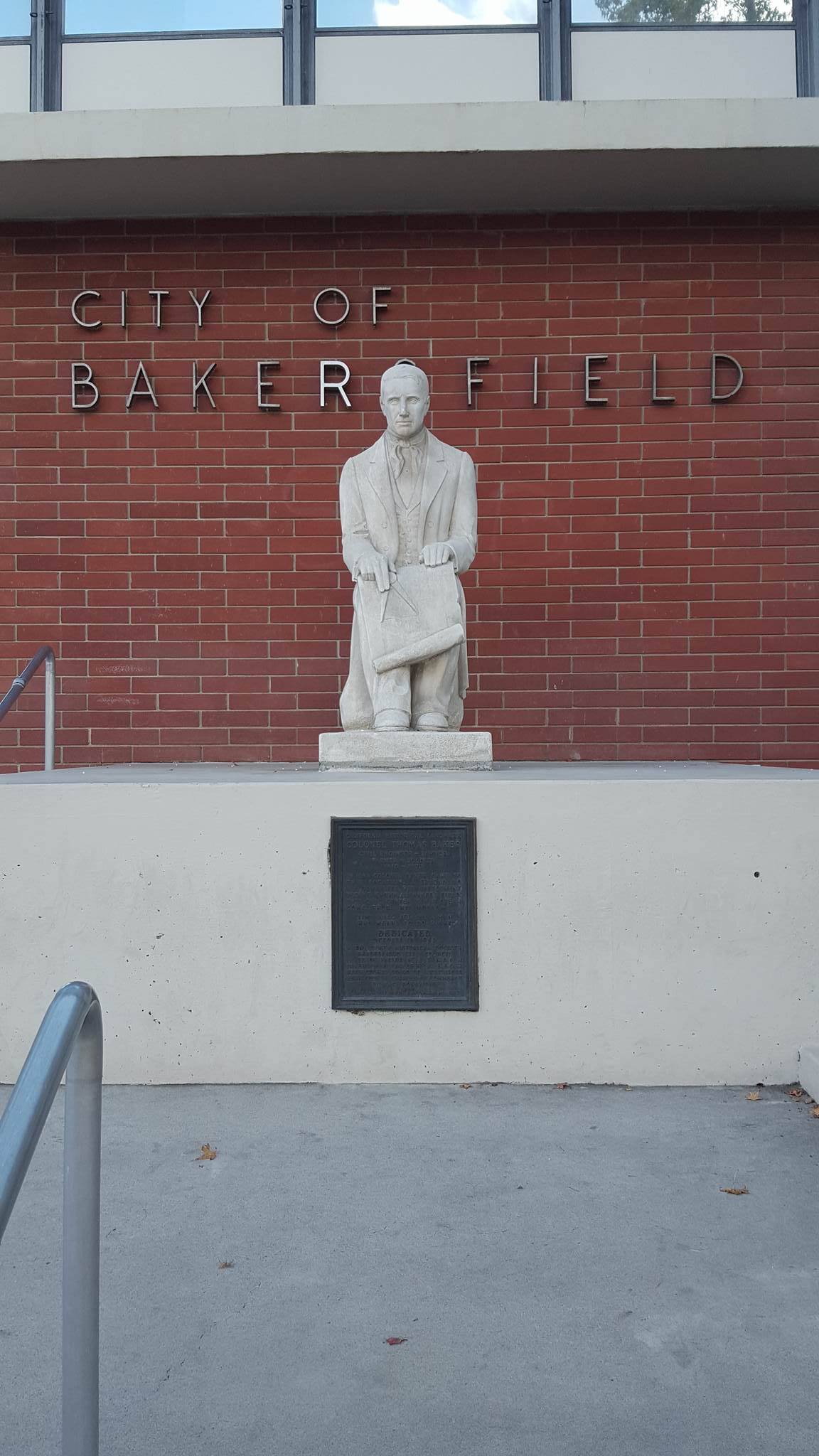 The statue of Colonel Baker is sitting up straight on a rock facing Truxtun Avenue. The sculptor was John Palo-Kangas, an artist born in Finland who was known for his work in the New Deal's Federal Art Project, including the Garces Circle Statue and several other Southern California statues.2 Under the statue is a brief description of Baker as well as his motto: "Time will justify a man who means to do right." Also included is a list of the contributors to the memorial's creation: Kern County Historic Society, Bakersfield City Council, El Tejon Parlor No. 239 of the Native Daughters of the Golden West, Bakersfield Parlor No. 42 of the Native Sons of the Golden West, the Kern County Board of Supervisors, Kern County Chamber of Commerce, and other public donations.

Thomas Baker, a colonel in the Ohio State Militia, was born on November 5, 1810, in Zanesville, Ohio. At the time, Ohio was still part of the state of Virginia. Throughout his lifespan, he served as a soldier, lawyer, politician, farmer, and civil engineer. He moved to Illinois in 1830 and shortly moved again to Iowa, where he served as a politician and lawyer. When gold was discovered in California in 1848, Baker decided to move again, this time to California.

When Baker moved to California, it was not with the intention of seeking gold like others. Instead he wanted to settle and begin his work as a merchant and a farmer. In 1850, Colonel Thomas arrived in Benicia, California. From there he moved to Stockton, and once again moved to Tulare County on 1852. There he made great contributions to the founding of the city of Visalia with a man named Mr. Vise. Colonel Baker was elected as a state senator for Tulare and Fresno counties from 1861 to 1862. His greatest work started at Kern Island in 1863, after he claimed swampland along the Kern River consisting of vegetation, wilderness, and animals. In partnership with Harvey S. Brown he began to drain this territory and build levees and canals to separate the river waters from the lake waters.3

This fact that this territory had consistency of a swamp only complicated the building process there; however, after the 1864 drought, the swampy overflow dried out, allowing construction to be possible and the beginning of a new community. The Colonel hired Indians to work on his field and farm alfalfa, which was there for the horses of travelers going from San Francisco or Sacramento to Los Angeles who could stop at Baker’s field and have a meal at his home. People began to settle in this Island and the community began to grow. Consequently, Baker began the creation of streets that were to be eighty-two and a half feet wide and avenues approximately one hundred and fifteen feet wide. Colonel Baker then gave all of his land away, and kept only 80 acres of land to himself. At the time, more than 600 people were residing in Kern Island.4 In 1869, when the post office was officially established, is when much thought was given to what this place was going to be named.5

After suggestions such as Kern Island by Colonel Thomas Baker himself and Bakersville by a member of the community, the name Bakersfield was chosen as the official name of the city. Colonel Baker is the founder and namesake of this city. The name fit quite well since this land was known by travelers, visitors, and members of the community as Baker’s field. Colonel Thomas Baker died on November 24, 1872, of pneumonia. His grave is located in what is now known as Historic Union Cemetery.