Ebenezer Methodist Church is one of the earliest African-American churches established in Huntington. The church was established in the early 1870s on Norway Avenue before it relocated to its current building at 1651 8th Avenue in 1917. In 1965, Ebenezer Methodist Church was integrated, becoming the first in the city, and possibly the state, to have done so. During the 1970s, the church established the Ebenezer Community Outreach Center Inc. to provide children with a safe learning environment and address issues of literacy, racism, economic conditions and spiritual hopelessness. The church also operates an affiliated medical clinic, Ebenezer Medical Outreach Inc., that provides medical services to the Fairfield community.

Drawing of the facade of the Ebenezer United Methodist Church 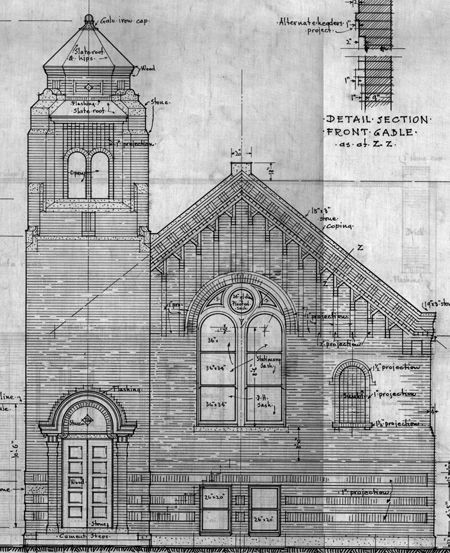 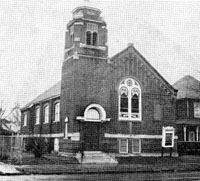 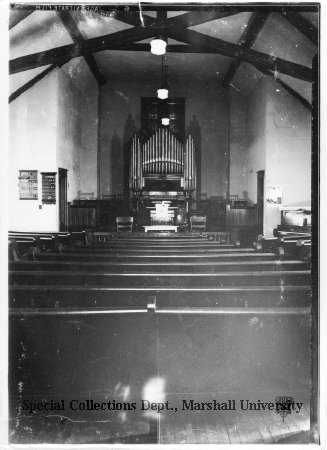 East and façade (north) elevations of the Ebenezer United Methodist Church, looking to the southwest 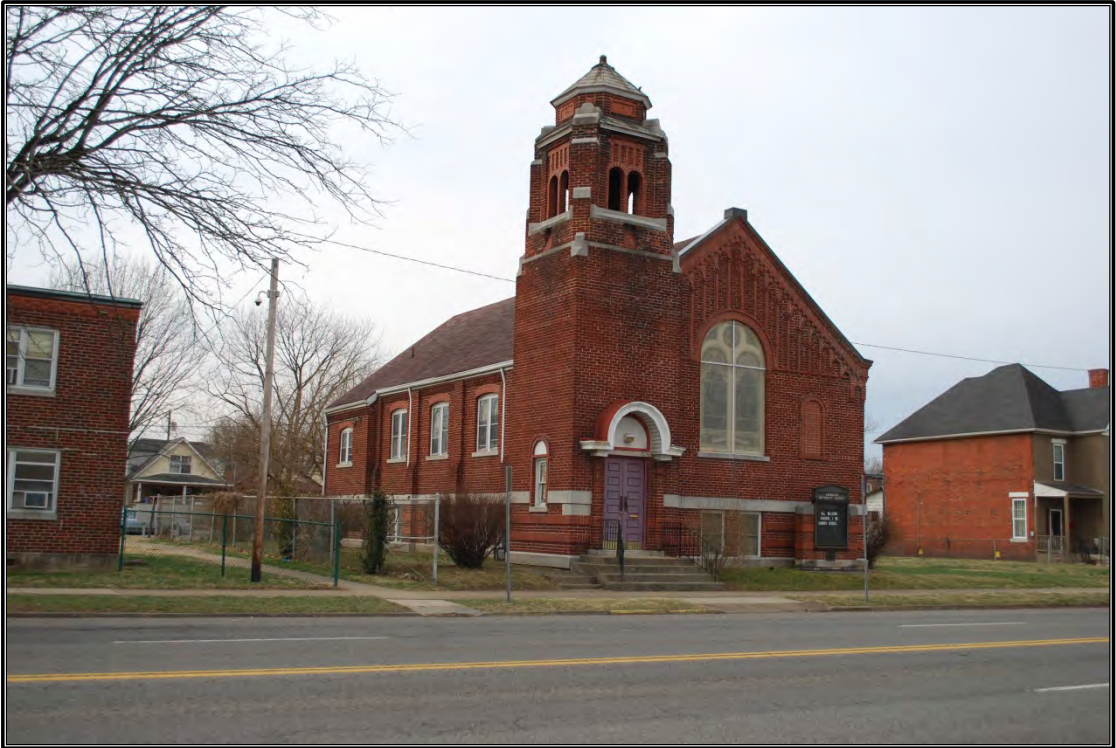 Façade (north) and west elevations of the Ebenezer United Methodist Church, looking to the south-southeast 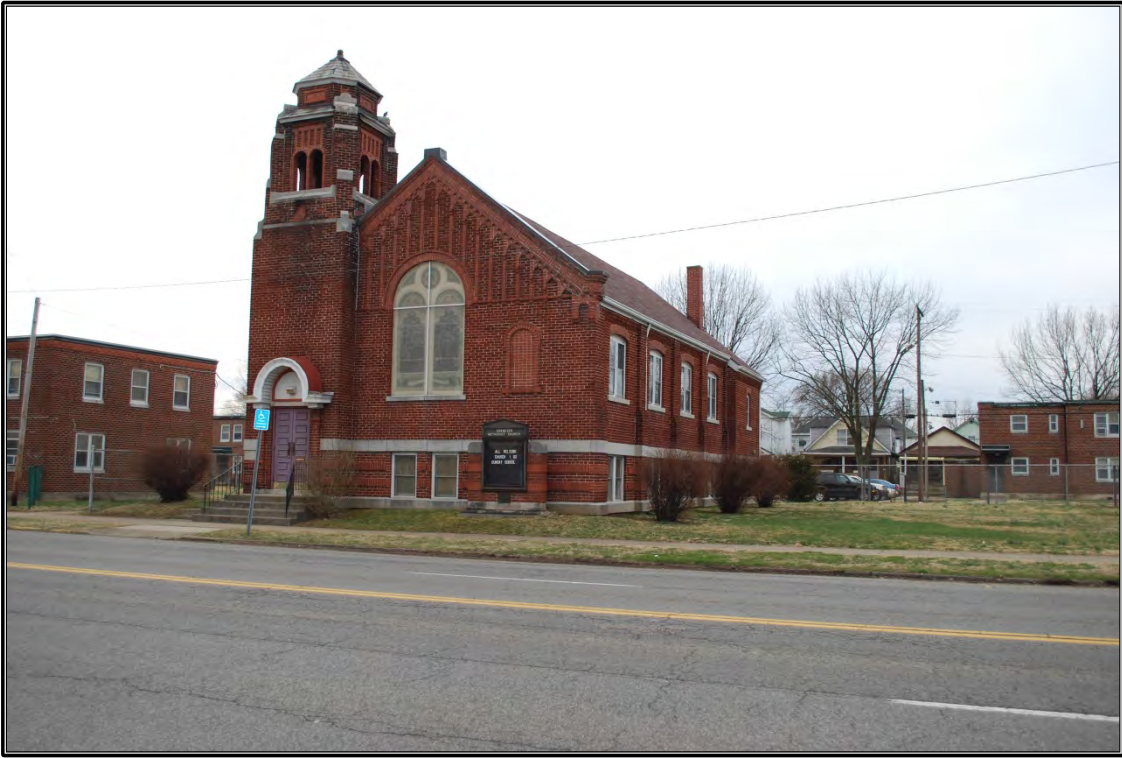 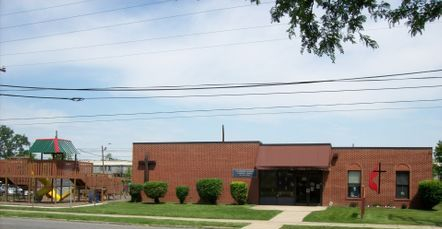 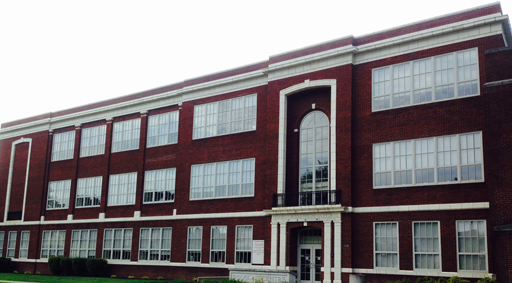 Prior to Huntington’s incorporation in 1871, there were no African American churches in Cabell County, leading many parishioners to attend services across the river in Ohio. Although the white churches in the area may have allowed African Americans to attend their services, the community quickly agitated for their own sites of worship. The First Baptist Church (first named Mt. Olive Baptist Church) and Ebenezer Methodist Episcopal Church were both established soon after the city was founded. At the time, Huntington had few facilities where the congregations could meet, so members of the two churches appear to have initially worshiped together at a building on Norway Avenue near today’s Spring Hill Cemetery. Later, Ebenezer Methodist Episcopal Church’s first church building was constructed at the intersection of 8th Avenue and 16th Street. Its first pastor was the Reverend Jacob Owens. The congregation then relocated to a building at the intersection of 16th Street and Artisan Avenue, where it remained until the church moved to its current location on 8th Avenue between 17th Street and Hal Greer Boulevard in 1917.

That year, the cornerstone of the new church was laid by the Reverend A. H. Whitfield. The building is a one-story brick structure distinguished by a bell tower at its northeast corner, which has decorative stone- and brickwork and an octagonal roof. The church’s facade has a central arched window opening filled with stained glass windows. A plaque located in front of the church reads “In Memory, Rev. and Mrs. C. E. McGhee,” which may be a reference to the Reverend Charles Edmond McGhee. McGhee was the founder of the West Virginia Colored Orphans’ Home in Huntington. Around 1939, the congregation was renamed the Ebenezer Methodist Church in 1939. In 1965 or 1966, renovations began at the church, resulting in a new parsonage that was completed and consecrated between 1967 and 1969. The church was renamed the Ebenezer United Methodist Church in 1968.

Ebenezer United Methodist Church serves the community in a variety of ways beyond traditional church services. In 1976, a daycare was started at the church with the expectation that a full-time outreach center would be started soon after. The Ebenezer Community Outreach Program began in the late 1970s during Reverend Richard A. Miller’s term as pastor. In 1982, the church purchased property across the street for a future Ebenezer Community Outreach Building. Construction started on the community center two years later, with Walter S. Donat, Inc., as the architect. Donat was also credited on the architectural drawings for First Baptist Church’s main building in the 1960s. In 1985-1986, the daycare at Ebenezer Outreach Community Center was licensed for seventy children. Today, Ebenezer Community Outreach Center continues to offer programs to the local community, such as preschool childcare and after school and summer children's programs, as well as a clothing closet, baby supplies, and school supplies for those in need.

In 1986, Ebenezer Outreach Community Center began operating a free medical clinic on a volunteer basis. In 1988, the clinic was placed under a medical advisory committee and began opening for eight hours a week in partnership with the residency program at Marshall University. Through grant funding and donations from area United Methodist Churches, the clinic continued to operate through the early 1990s. To receive greater funding, Ebenezer Medical Outreach incorporated as a separate organization with its own board of directors. In early 2003, the medical clinic moved its physical operations to the Douglass Centre, the former Douglass Junior and Senior High School, where it continues to provide medical services to the Fairfield West community today.

Since its foundation, Ebenezer United has been a fixture of the African American community on the south side of Huntington known as the Fairfield neighborhood. The leadership provided by the church has shaped the African American experience in the city, offering its members the opportunity for status and uplift. According to historian Cicero M. Fain III, as the city’s African Americans acquired land, opened businesses, and founded churches and schools, they “helped facilitate a transformation in the development of Black culture and consciousness, as evidenced by the expansion of Black institutions, the rise of a Black middle class, and civil and political challenges to the racial and class status quo.” In 1965, the church was integrated, although it remained a primarily African American church due to the demographics of its neighborhood. It was the first church in Huntington - and one of the first in the state of West Virginia - to do so. Given its significance as a local religious and cultural institution, the church is a potential nominee for the National Register of Historic Places. As the oldest African American church building in Huntington, the building meets the fifty-year age minimum of most eligible structures and the exterior remains well-preserved.