Alpine Hose #2 is a historic firefighting station built in 1880. It was one of four stations in the town, all of which were manned by volunteer firefighters. Today it is a museum operated by Historic Georgetown, Inc., which partnered with the Georgetown Volunteer Fire Department and the Town of Georgetown to restore the building which was completed in 2013. The station features original carpeting, a trophy case (during that time competition between firefighting companies was popular), uniforms, furniture, and fixtures. There is also a hook and ladder truck used by another company. An interpretive exhibit about the station's history is also included. 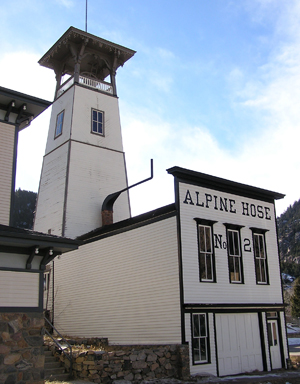 The station was built between 1875-1880 but the tower was added later. It features a 1,200 pound bell donated by William Hamill, for whom the nearby Hamill House Museum is named. The Alpine Hose crew won a few state championships and their trophies are displayed. The four companies in town did an excellent job of preventing fires from spreading, thereby protecting the town from complete destruction which occurred in many other towns. Georgetown is therefore one of the few towns in the state to retain its original character.