The Potawatomi Indian tribe originated in the Midwest. Affected by Government treaties they were forced to relocate west of the Mississippi River. Their 600-mile, two month journey has come to be known as the Trail of Death. Along the way various monuments have been placed to serve as memorials to the lives that were taken. The tribe made a stop in Jacksonville Illinois in 1838, and in 1933 they were given a monument by the Morgan County Historical Society. 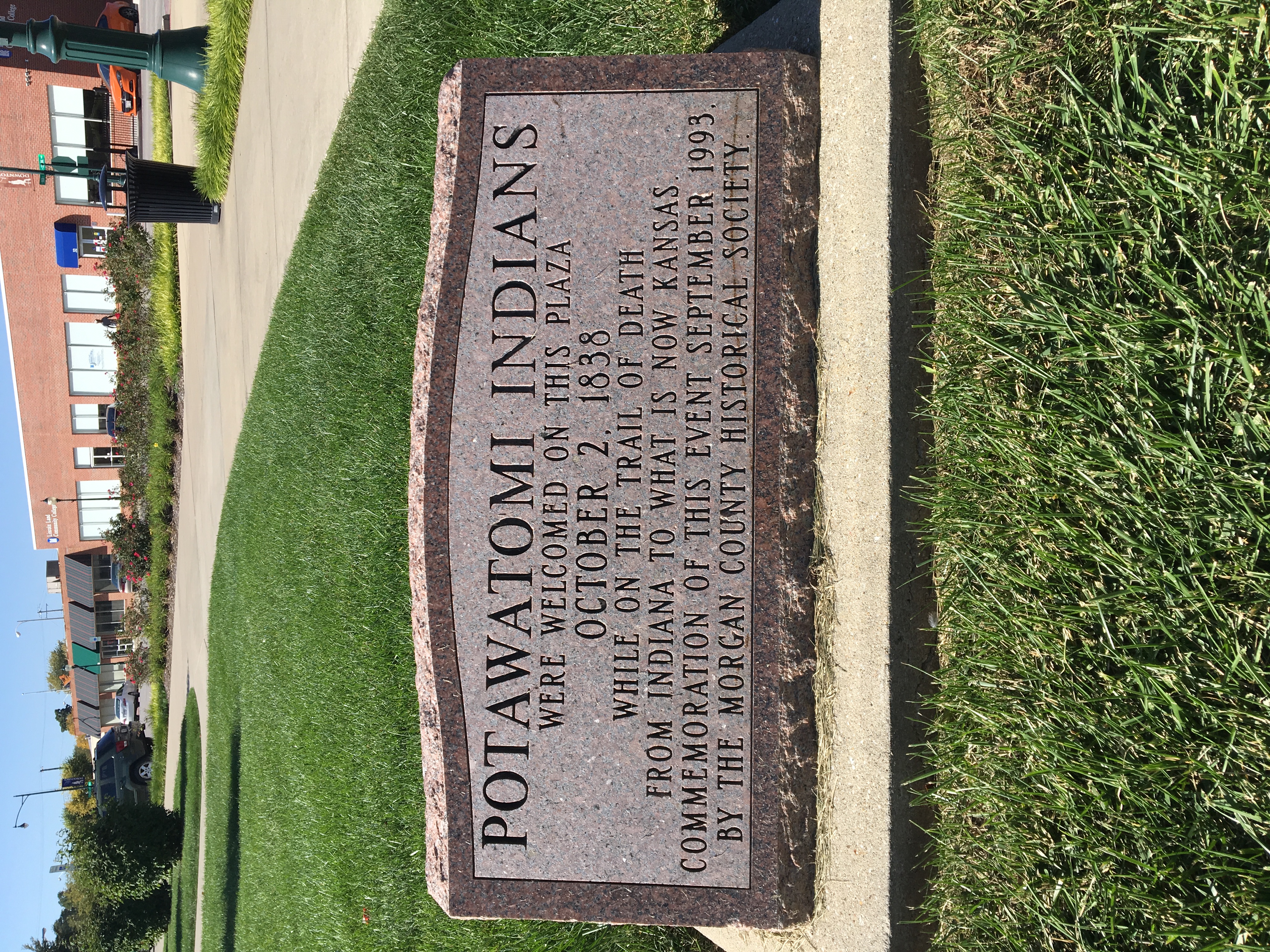 In the early to mid 1800s the Potawatomi Indian tribe used to live in parts of lower Michigan, Ohio, Indiana, Illinois and Wisconsin, with an estimated population around 8,000 people. Their first settlement was in Northern Indiana. Their creator was named Gitche Manitou meaning Great spirit and giver of life in the Potawatomi language. Potawatomis were always a fully clothed tribe, so they could survive the harsh Midwest winters. The tribe was always known for being proportional people, just like in today’s society. Pots also very rarely painted their faces, in fact they only did it for celebrations or gatherings.  Potawatomis were very smart and organized and discovered a lot of medical uses for plants. Every Potawatomi community lives on its own reservation. Every tribe is politically independent from one another with its own government. This tribe spoke the language called Central Algonquin which is a musical language with complicated verbs and many parts. Even though Potawatomi Indians are very different from other Indian tribes they are similar in many ways. Men were hunters and fisherman and women did most of the child care and cooking. Children did what typical children do, play with one another, go to school, and do chores around the houses. They lived in dome-shaped houses called wigwams and lodges. For transportation they mainly used canoes that they built out of birch bark. Even though the hunted and fished their main source of food was from farming corn, beans, squash, and tobacco. The Potawatomi was apart of Council of Three Fires with the Ojibwe and Ottawa Indians. Their main enemies was the Iroquois Confederacy and the Sioux tribes.

Now, that you’ve learned a little bit about the tribe let's learn about what the tribe is known for, the Trail Of Death. In 1838, it was troubled times for many Indian tribes, Including the Potawatomi. Affected by government treaties, many tribes were forced to relocate west of the Mississippi River due to the government wanting these lands due to prospective gold mines, other natural resources such as coal, or just for new people to move into. Forced to move, they started the Trail of Death, however; it did not discourage them from their way of life. When Andrew Jackson signed the Indian removal act of 1830 it was the start of removals. In September of 1838 the government finally came in and forced removal. The government claimed that the main reason for this was so tribe members could be protected from negative white society influence and continue to pursue their way of life until they were ready to join the white society. However the real reason was that the treaties concerned the cession of lands by the tribe, and were part of a large scale effort by the United States government to purchase and extinguish their claims in the Northwest Territory and the Southeast, and to remove all people to land west of the Mississippi River. The government also viewed this tribe as a failure up to this point because they had not started farming like many other tribes were. Marching at gunpoint, it took the indians two months to make it from Plymouth, Indiana to Osawatomie, Kansas, crossing part of Indiana, Illinois, Missouri, and part of Kansas. Some of the major cities they went through were Lafayette, Indiana, Jacksonville and Springfield, Illinois, and Huntsville, Indiana. After they left everything they had done was destroyed and their land was sold. Father Benjamin Marie Petit was sent with the tribe to care for the sick. He kept a diary during the trip, and that is where most of the facts about the journey came from. Over 800 Indians were on the 600 mile journey and more than 40 died due to disease and stress. During the first decade in Kansas another additional 600 members died. Once they landed they had to start from scratch and build new homes the that government was supposed to build for them. Along the way various monuments have been placed to serve as memorials to the lives that were taken. Overcoming the government, the Potawatomi tribe still exists today located in the Upper Midwest Region.

When the tribe came through Jacksonville on October 2, 1838 they were greeted by citizens at Central Park Plaza, referred to as “The Public Square” in 1838. The locals gave the tribes gifts of tobacco and tobacco pipes. Even though the tribe only stayed for 15-20 minutes they were given a monument in the Northeast corner of the square, along the sidewalk. The monument was commemoration from the Morgan County Historical Society in September 1993. Another piece of Potawatomi remembrance was the evergreen tree planted by the Trail of Death commemorative Caravan in 1988. The tree is on the south side of Duncan Place drive.