Named after a large boulder, the Battle of Hanging Rock Historic Site is the site a battle between British and American forces during the Revolutionary War in July and August 1780. The site was once a British outpost, one of many the British established to try to maintain control of South Carolina. This outpost was strategically important as it was situated between the towns of Camden and Charlotte. A historical marker commemorates the battle and the site was added to the National Register of Historic Places in 1974. During the Civil War, General Sherman's men camped here for two days.

The historical marker commemorating the site 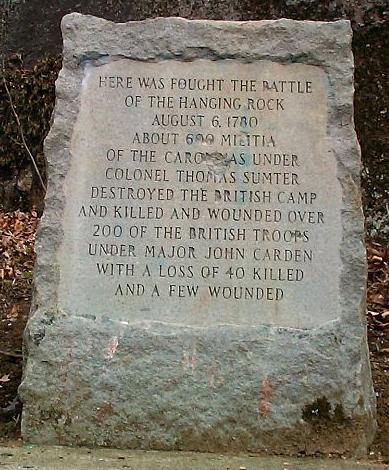 The first battle took place on July 30. American commander Major William Richmond Davie led a force of dragoons and cavalry and attacked a house near the outpost, taking horses and arms. Another commander, Thomas Sumter, led a force that attacked another British outpost 15 miles away but failed to overtake it and retreated and encountered a British contingent of reinforcements. Sumter's men managed to kill 60 British soldiers and only lost 20 men.

On the morning of August 5, Sumter's force of 300 combined with Davie's force of 500 men and attacked the British outpost at Hanging Rock. The British had 1,400 soldiers, including Loyalists, who were encamped in three locations. The Americans attacked and overran the Loyalist camp and drove further towards the other British lines. Running out of supplies and ammunition forced the Americans to halt the attack and withdraw. In the end, the British lost 160 men versus 20 Americans killed and 40 wounded.