Mount St. Helens as it appeared before the 1980 eruption. 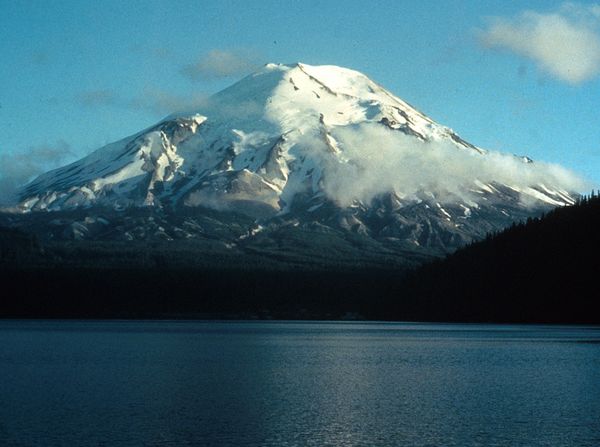 The eruption registered 5.1 on the Richter Scale and left this enormous crater. 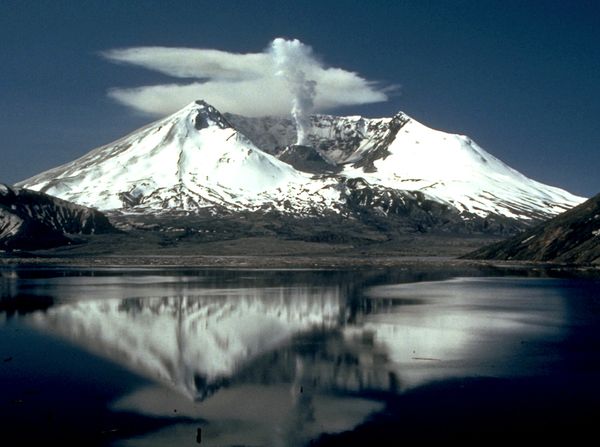 On the morning of May 18, 1980, at 8:32 am, Mount St. Helens erupted when an earthquake measuring 5.1 on the Richter Scale shook the region. This earthquake triggered a horseshoe shape collapse on the north face of the mountain. Magma inside Mount St. Helens burst forward into a large pyroclastic flow that flattened vegetation and surrounding buildings. The 1980 Mount St. Helens eruption was the most destructive and deadly in United States history. The death toll reached fifty-seven people, with 250 homes, 47, bridges, 15 miles of railway, and 185 miles of highway were destroyed during the eruption. It is predicted that almost 7,000 big game animals including bear, elk, and deer died as well. A plume of ash erupted from the volcano for approximately nine hours reaching twelve to sixteen miles above sea level. The ash cloud raced eastward at an average speed of 60 miles per hour, reaching the state of Idaho by noon. The eruption of Mount St. Helens drastically changed the landscape of the region. A large crater was formed in the side of the volcano and the land surrounding the volcano is still scarred from the pressure of the eruption. Since 1980 Mount St. Helens has not remained quiet. Numerous small eruptions have occurred in the years since her first explosion but many of those only included a small cloud of ash.