The Atlantic House is arguably the nation's oldest gay bar. Catering to the gay community openly since the 1950s, The Atlantic House (commonly referred to as 'The A-House') is a popular establishment for both locals and tourists alike as well as members of both the straight and LGBT populations. This establishment has three different sections which offer very different night club experiences (please see the description below). The bar not only helped turn Provincetown into an openly accepting getaway, it also aided in the creation of the tourism industry that the town thrives on today.

This post card, presumably from the late 1800’s shows the façade of the tavern with the portrait of fisherman Frank Potter Smith who purchased the establishment in the early 1870’s and gave it its now iconic name. 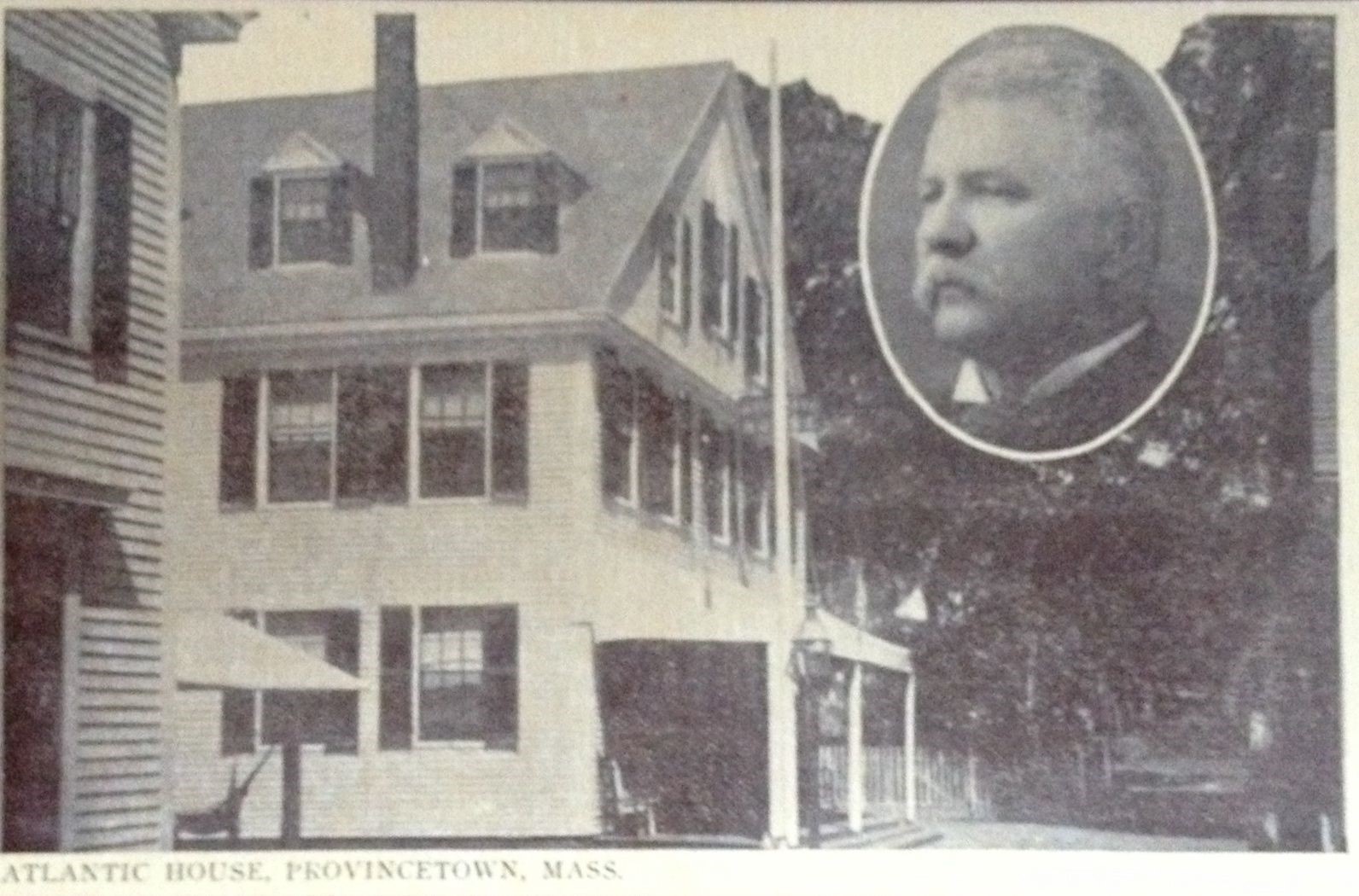 This photograph, taken in September 2005, shows that the establishment looks very much like what it used to when it first became the Atlantic House. In this photograph there are no signs that this is a gay bar, which maintains the building's history. 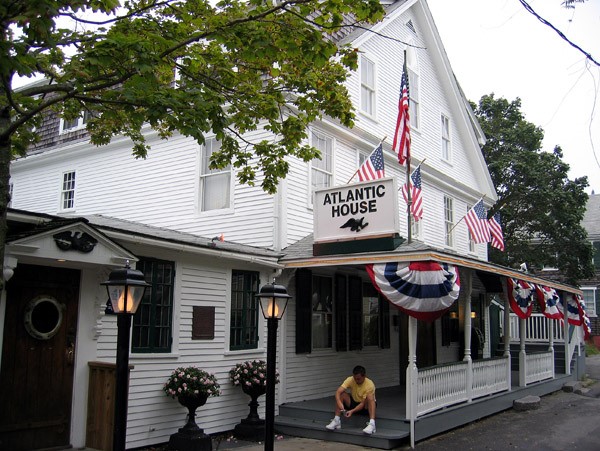 This is a post card circa 1905 that also depicts the facade of the A-House. The building has not undergone many physical changes since it was built in 1798. 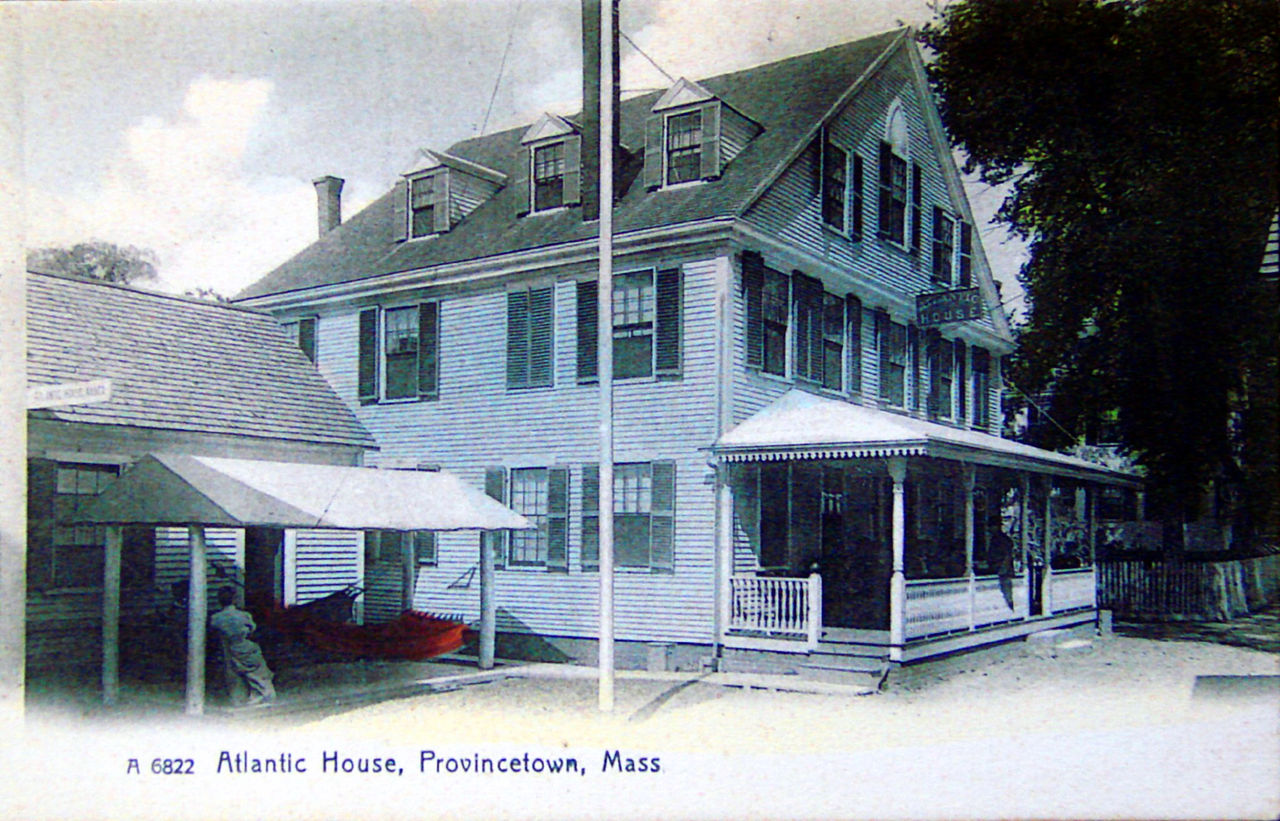 Originally founded in 1798, what is now called the Atlantic House has been one of Provincetown’s favorited establishments for locals and tourists alike for centuries. A tavern was created at this location by the town’s postmaster Daniel Pease for local fishermen. Provincetown thrived on the fishing industry for almost the next two centuries[1]. Throughout the nineteenth century the town prospered from the whaling industry and was rivaled only by close by New Bedford[2], Massachusetts. Patrons of the tavern at this time were mostly Portuguese Catholic fishermen. In the 1800’s the tavern was purchased by Benjamin Allstrum and was renamed the Allstrum House. By the early 1870s Frank Potter Smith bought the tavern and gave it its current name. Although the town was a large fishing port, it did not have many full-time residents. During the quiet winters in the early twentieth century, artists such as Tennessee Williams flocked to Provincetown, bringing their gay acquaintances with them[3].

As members of the LGTBQ community began to gather in Provincetown, they frequented establishments such as The A-House. By 1950, managers and owners had decided it was time to make patrons feel welcome without having to hide their identities. Reginald Cabral became the sole owner of the establishment and declared the Atlantic House a gay bar in the mid 1950’s. This was a welcome addition to a community that had quickly become a getaway for members of the LGTB population. From then on, the bar began to host drag shows, giving the gay population a place to call their own in a town that still held traditional “New England Yankee” and Roman Catholic beliefs.  Professor Sandra Faiman-Silva of Bridgewater State University writes, “Cabral delighted in drag performance and became a part of Provincetown’s gender transgressive culture, not with fear or aversion, but as a ‘fellow traveler’ embracing a more expansive construction of self[4].” Because safe spaces were being created in Provincetown, the tourist industry began to grow.

By the 1970’s the fish population had been depleted and fishermen had to find new sources of income. According to Professor Faiman-Silva, some turned their boating opportunities into tourism related enterprises. Boats began running tours of the sand dunes and whale watching excursions and other fishermen went into retail sales. The Atlantic House could not have been declared an openly pro-gay establishment at a better time. New tourists were attracted to a welcoming and inviting town. Members of the gay population who made the journey to Provincetown because of its accepting culture began to spend more money on traditional tourist activities, which saved the town’s economy.

Today the Atlantic House is divided into three different bars. The Big Room is home to Provincetown’s largest and only year-round dance club. The Little Bar is a traditional cruise bar while the Macho Bar caters to the leather and Levi members of the gay population. Aside from being a gay bar, the establishment is very welcoming and accommodating to straight community members and tourists as well. The Atlantic House has both rich historical and cultural values for the community of Provincetown. It is one of the nation’s oldest gay bars, which helped to build an industry at a time when Provincetown needed one the most.