The museum is located in the old Chicago Great Western Railway (CGWR). Founded in 1885, The CGWR linked Chicago, Minneapolis, Omaha, and Kansas City. It was nicknamed the Corn Belt Route because of its operating area within the nation's Corn Belt, the midwestern United States. 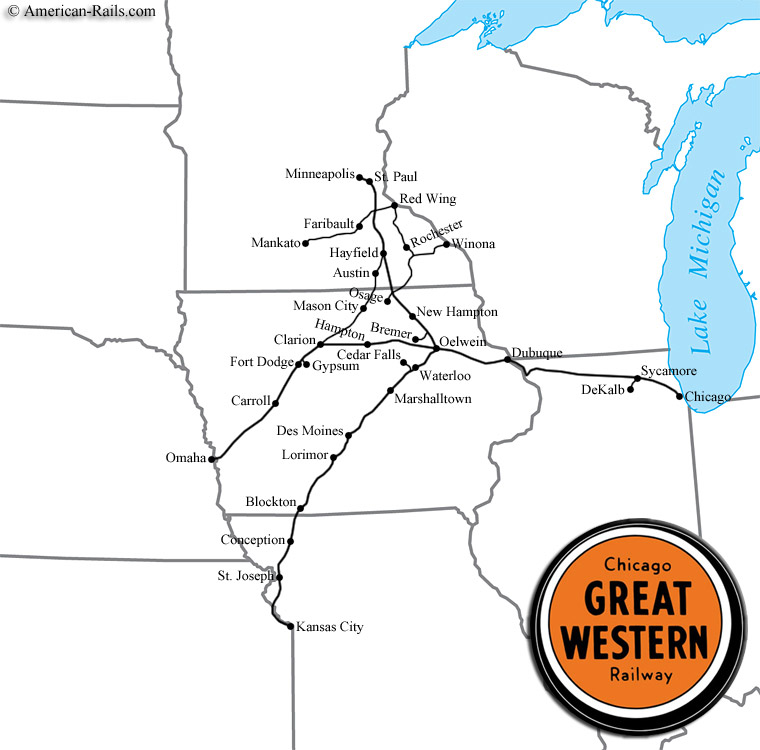 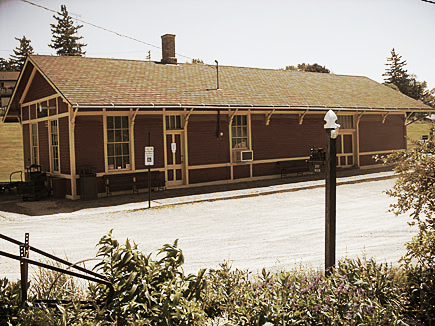 The romantic narrative of railroads traversing the land serves to detract from the railway's true history - it was a competitive industry full of successes and failures. The trains of the late 19th and 20th century served to influence real-estate, population movements, the development of suburbia, and it was ingrained into the fabric of the daily lives of many Americans through the mid-20th century. Just as today's populace rarely looks up and notices an airliner overhead, not everyone noticed trains. Thus, many railways emerged as businesses hoping to compete with other established railway companies - some succeeded, some failed. The Chicago Great Western Railway's (CGWR) success lay somewhere in the middle.1

With the nickname "Corn Belt Route," CGWR is rarely mentioned in railway history because it was smaller, although the railroad's 1,500 miles of track connected Chicago, St. Paul/Minneapolis, Omaha, and Kansas City. CGWR faced a disadvantage in that it  emerged in the large cities well after its biggest competitors. Moreover, CGWR maintained a hub in the small town of Oelwein, Iowa instead of one of the aforementioned large cities.2

The railways handled both freight and passengers. Largely known for its good customer service, CGWR also uniquely drove fewer runs, but with longer trains. The height of its success arrived during World War II. Glen Brewer provided this memory,

My parent's house in Chicago's west suburban Villa Park had, when I was a boy, a very fine view of the Chicago Great Western tracks. From the paired dinning room windows, I could see across four vacant lots and a street, Great Western Boulevard, to the right-of-way where long freight trains ran. All during World War II there were trains loaded with army goods: I remember seeing big guns, tanks, half-tracks and jeeps.

Rail traffic, freight and passenger, reached unprecedented levels during the war years. There were massive movements of military goods and personnel, and because of gas and tire rationing, much traffic, previously lost to the highways, returned to the rails. Demand on railroad personnel and equipment were tremendous.

I was still quite young when the war ended, but business on the CGW continued at a high rate. I remember solid trains of refrigerator cars, yellow ones marked Armor and red ones marked Swift. There were also trains of black tank cars. The CGW carried truck trailers on flat cars. They were an innovator in this service.

And I remember the hobos (we called them bums) still riding the freights long after the depression had yielded to wartime bustle and then peacetime's relative calm. Mother occasionally would make a sandwich for a down on his luck 'bo who came knocking at the back door.

The Great Western's, philosophy, at least dating to the 1930s, was to run long trains, less frequently, than most railroads, and accordingly they bought thirty-six large 2-10-4 type locomotives in 1930 and 1931 from Baldwin and Lima. These engines were huge by prairie standards. Extra heavy rail was installed for the new engines and heavier trains. For train crews and shop workers this was not good news: fewer trains and fewer engines meant significant layoffs.

These big engines, separated into three classes, had 63 inch drivers and tractive effort ranging from 84,600 pounds to 97,900 pounds. When new, the big Texas types were not well counter-balanced. My parents remembered that, when new, they really shook the neighborhood.

More than once, I remember how upset my mother would be when a train passed by right after she had hung the laundry out to dry (and when the wind was just right). She would take it all down and do it over again.

Shortly after the war, the Great Western quickly dieselized. They were the first railroad of my acquaintance to do so. Typically using six F units, trains became even longer: frequently well over 100 cars. Soon I started seeing the big steam engines, scattered mid-train behind the diesels, being hauled dead to the scrap yards of Chicago. This was about 1948 or 1949 when I would have been six or seven. I never got over the sense of loss I felt; I have been a devoted steam fan ever since.3

Brewer's account of the transition from steam to diesel speaks the culture of trains during the 20th century, one noted by the infamous childhood books and television show, "Thomas the Train." The romanticized idea of steam engines roaming the countryside gave way to more industrialized fright trains, notably as automobiles replaced trains as the preferred mode of transportation.4

By the 1960s, modernized economics and the transition of a trains' purpose in society resulted in the merger between CGWR and the Chicago & North Western Railway. But, the depot station in Elizabeth seeks to preserve the railway's history. The local historical society notes:

The Depot museum is located in a former Chicago Great Western Railway station and focuses on the the railroads of northwestern Illinois, prioritizing the Chicago Great Western. the Depot Museum has an extensive library with over one-thousand railroad books covering nearly every America railroad from past to present, plus railroads from many other countries.

Thousands of railroad artifacts are displayed in the museum's collection. Numerous N-scale, HO-scale, and G-scale model railroad layouts operate fully inside the Depot Museum. Among the interactive exhibits at the Depot Museum is the 15 minute award winning film "Memories of the Chicago

A full-size Milwaukee Road caboose, located next to the Depot Museum, provides a unique addition with even more displays housed inside.5

From May thorugh October, the museum is open every weekend from 11:00am until 3:00 p.m.