Monument dedicated in 1911 to honor the late Elizabeth Crockett 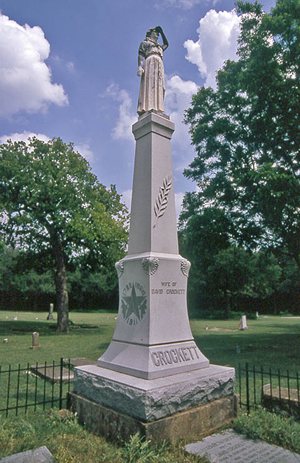 In 1815, Elizabeth Patton married Davy Crockett, becoming his second wife.  Prior to his death, the Crockett family was living in Tennessee.  After his death at the Alamo in 1836, Elizabeth moved her family from Tennessee to the Acton area to stake a claim on a land grant that was given to the heirs of Alamo defenders.  She and their two sons settled on the land, 320 acres, that was granted to them by the Republic of Texas.1
Elizabeth and her sons lived in what is now Hood County.  They built two small log cabins on their land, what would later become the early frontier settlement of Acton.  The site of the cabin where Elizabeth resided is marked by a Texas Centennial Marker, which were the first markers erected in Texas.2
After her death on January 31, 1860, Elizabeth was laid to rest in the Acton Cemetery dressed in widow's Black that she had been wearing since learning of Crockett's death in 1836.  In 1911, the state placed the monument to honor the pioneer mother.3  The monument is located near the center of Acton Cemetery. At the site, visitors can find the statue of Elizabeth Crockett, as well as an interpretive sign that gives further information regarding her life.